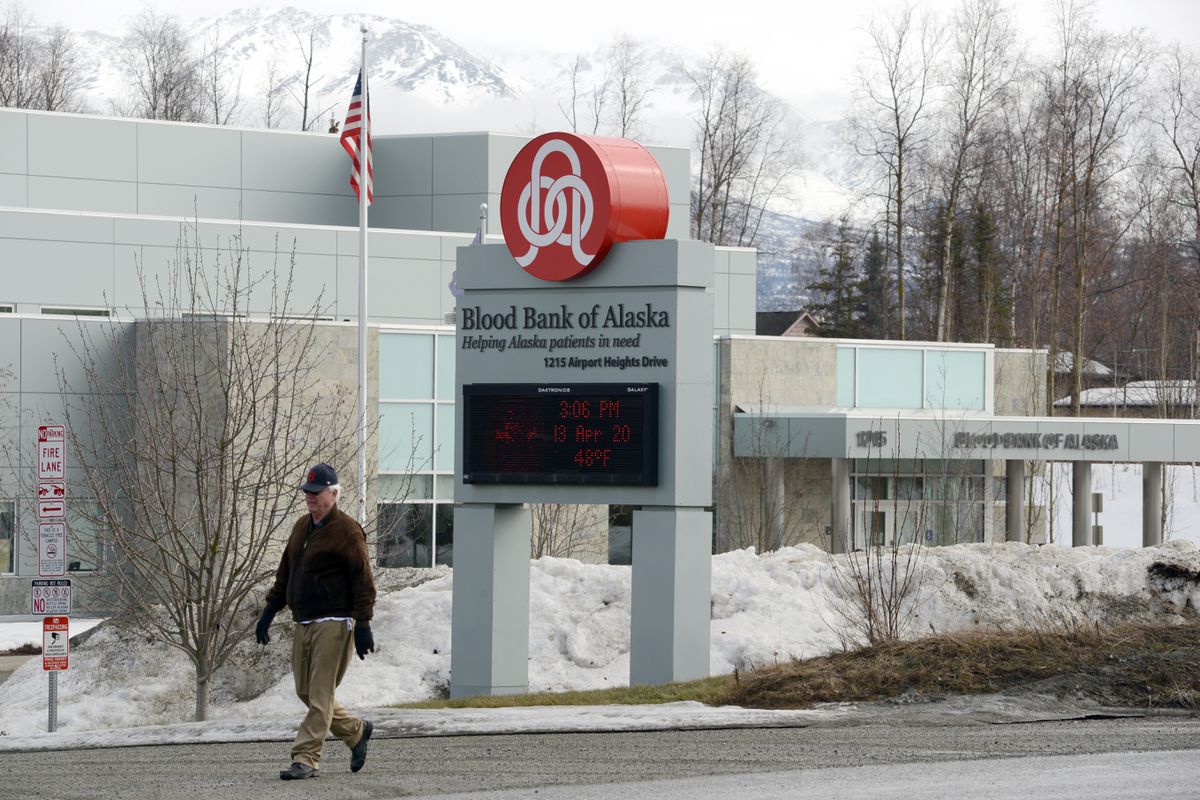 Blood Bank of Alaska is urging recovered COVID-19 patients to donate plasma for use in treating people who are severely ill with the disease.

The organization has about a dozen units of what’s called “convalescent plasma” from recovered coronavirus patients in storage now, according to CEO Robert Scanlon. That’s not nearly enough should predictions of increasing hospitalizations hold.

“We are seeing a critical need right now due to the fact that the cases of identified infection are increasing, as is the number of people that are actually being hospitalized and suffering from severe symptoms,” Scanlon said.

[Many of Alaska’s COVID-19 patients have recovered. Their plasma could heal others.]

Alaska’s soaring daily infection rates and community spread around the state are translating to more hospitalizations: Anchorage’s hospitals experienced a nearly 60% increase in COVID-19 patients last week, with 25 hospitalized in the city as of Tuesday evening. Outside Anchorage, another nine people were sick enough to need hospital care.

A month ago, the Blood Bank had just two or three patients who had received any of the convalescent plasma units, Scanlon said.

“Now, in just a short time frame, we’ve had maybe six folks receive it,” he said.

The use of “survivor plasma” is still in the trial stage. U.S. researchers banded together in March to press for the treatment strategy, calling themselves the COVID-19 Convalescent Plasma Project, according to an article posted this week by Johns Hopkins University. They sought to treat severe symptoms rather than cure advanced stages of the disease.

In April, the federal Food and Drug Administration designated the Mayo Clinic as the lead institution investigating use of plasma to treat hospitalized COVID-19 patients with severe or life-threatening illness or the risk of developing it.

More than 20,000 patients in the U.S. have been treated with convalescent plasma. Now researchers are using it to see if it can prevent disease in exposed health care workers.

In Alaska, physicians taking part in plasma research say the limiting factor is whether recovered coronavirus patients choose to give blood.

“We just need people to donate if they’ve recovered from COVID so that they can help save other people’s lives,” said Dr. Arva Chiu, internist on the Fairbanks Memorial Hospital medical staff who’s also principal investigator for the Mayo Clinic convalescent plasma program there. “I know it takes time out of ... a workday, it’s not convenient. But we are in desperate need.”

Plasma from people who fought a coronavirus infection contains antibodies that may help others fight off the disease. Convalescent plasma is the liquid part of blood collected from patients who have recovered from COVID-19. Antibodies are proteins that help fight infection.

Generally, recovered patients seeking to donate need to have proof of their infection and to wait 14 to 28 days after their symptoms disappear before donating.

Advocates of using plasma treatment in Alaska say it appears to be helping, sometimes more than drug therapies, but there is much research still to come on a pandemic that only sprang to life late last year.

The first patient to receive the treatment in Alaska, at Fairbanks Memorial Hospital, credits it with saving his life, Blood Bank officials say.

The man had underlying lung disease and was getting worse with COVID-19 by the second or third day when he received plasma, according to Chiu.

“Within 72 hours his fevers disappeared, they resolved,” she said. “And then his energy came back within 24 hours. He said, ‘I could just feel it working.‘”

Two other severely ill COVID-19 patients at the hospital received plasma this week.

The patients were receiving dexamethasone and remdesivir, drugs being used for COVID-19 treatment, but they weren’t helping, Chiu said.

Twelve hours after plasma treatment began, both patients were doing remarkably well, she said Tuesday. “I just got off the phone with the charge nurse on the medical floor. She said, ‘Yeah, it’s incredible how quickly they’re turning around.‘”

Blood Bank of Alaska began collecting convalescent plasma in May and has worked with more than 30 recovered patients so far, the organization says. The state’s rising number of infected people means there are more who may get sick enough to need plasma treatment.

It also means there’s a larger pool of possible donors. Out of more than 2,700 Alaskans who tested positive since the pandemic began in March, more than 830 are considered recovered, according to the Alaska Department of Health and Social Services COVID-19 dashboard.

The highest antibody levels are seen at 28 days after symptoms were last detected, Chiu said. But even after that, as antibodies diminish by the month, there are still benefits to using convalescent plasma. That’s because of the presence of at least some antibodies but also the production of T cells that tell the body it’s been exposed to a disease.

“There’s a lot of stuff we don’t know about the plasma and how it works,” she said. “It’s still definitely a good option for therapy.”