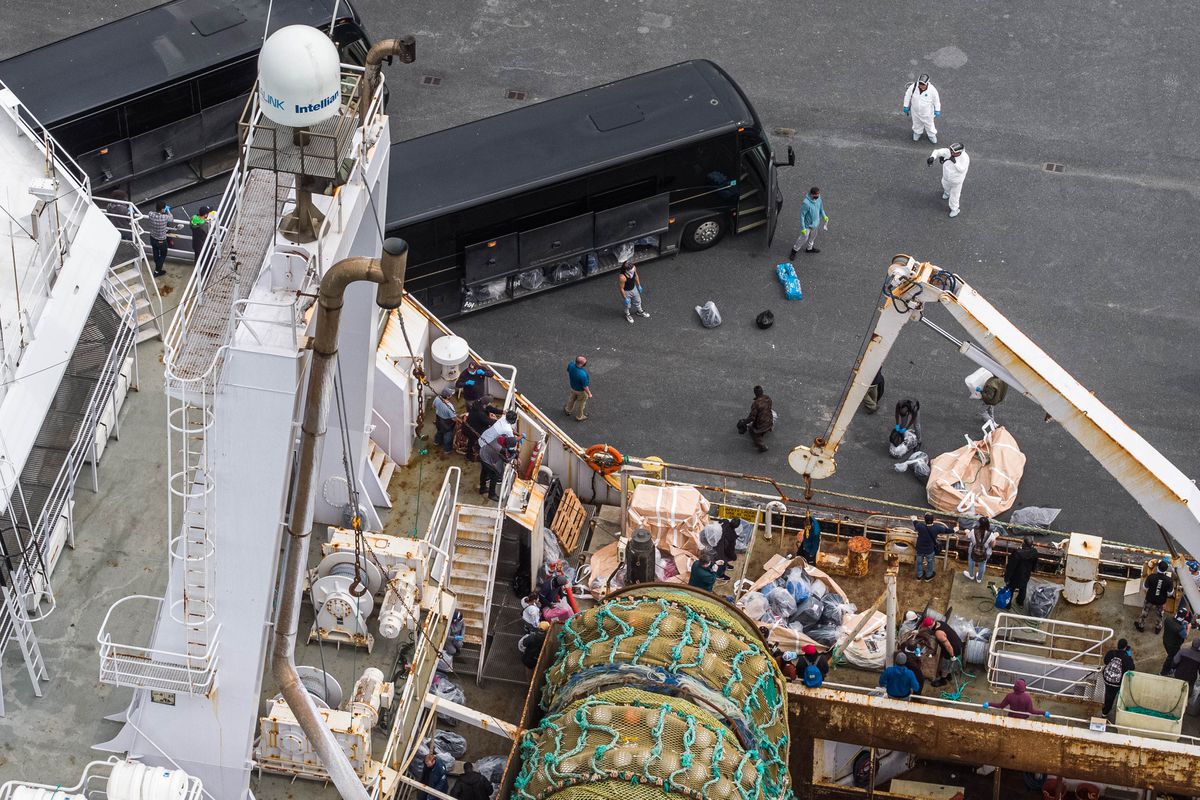 Crew disembark from the American Triumph and board buses in Seward on July 22. American Seafoods, which operates the factory trawler, reported that dozens of crew members tested positive for COVID-19. The crew disembarked in Seward and were transported to Anchorage, where they were isolated for further care. (Loren Holmes / ADN archive)

Crew disembark from the American Triumph and board buses in Seward on July 22. American Seafoods, which operates the factory trawler, reported that dozens of crew members tested positive for COVID-19. The crew disembarked in Seward and were transported to Anchorage, where they were isolated for further care. (Loren Holmes / ADN archive)

Clarification: Earlier versions of this story reported the task force recommended that the state require masks be worn by employees working in Alaska seafood processing plants. The state has required seafood workers to wear face coverings since May, according to state officials.

The state should mandate masks, especially in places with high or rising case counts, to slow the continued increase in Alaska coronavirus infections.

That’s the recommendation of a July 26 report distributed to states by the Trump administration’s coronavirus task force, as published by The New York Times.

The task force says numerous population centers qualify for mask orders: Anchorage (where they’re already required and cases are spiking regardless), the Fairbanks North Star Borough, the Kenai Peninsula, the Matanuska-Susitna Borough and more rural communities in the Valdez-Cordova and Yukon-Koyukuk census areas.

At a legislative hearing Tuesday, several health experts said rising hospitalization rates here represent a lagging indicator and urged the state to adopt broad restrictions to curtail the spread of the virus before hospitals start seeing the surges of seriously ill patients that other states like California and Florida have had to contend with.

Regional hub Bethel and smaller Yukon-Kuskokwim communities won’t have a place to send COVID-19 cases if the region experiences a surge and Anchorage facilities are beyond capacity, according to testimony from Dr. Ellen Hodges, chief of staff for the Yukon-Kuskokwim Health Corp. YKHC serves 48 villages, 58 tribes and about 28,000 residents.

“The models that are used to predict the increase in cases mostly point to an increase in community spread followed by hospital admissions and then ICU admissions and then deaths,” Hodges testified. “I don’t think we can bank on Alaska having a different trajectory than the rest of the country. It is clear that something must be done to interrupt our current trajectory.”

She recommended “enforcement support” for travel measures in small communities — some of which lack any law enforcement — and a statewide face covering measure that allows communities to opt out.

Calls for statewide action come after what the Alaska Department of Health and Social Services called “Alaska’s worst week of the pandemic in terms of rapid increases in resident and nonresident new cases” in an update released Wednesday. The statistics referenced cover the period from July 19 to July 25.

Dr. Thomas Hennessy, an epidemiologist at the University of Alaska Anchorage and former director of the Arctic Investigations Program at Centers for Disease Control and Prevention, said Tuesday that Anchorage could run out of hospital capacity by early September if COVID-19 infections — and resulting hospitalizations — continue to grow at present rates.

“We have never been closer to exceeding our health care capacity,” he said.

Staffing, just as much as hospital bed space, is a limiting factor, said Jared Kosin, president and CEO of the Alaska State Hospital and Nursing Home Association.

Total cases in Alaska residents rose 34%, mostly involving people in their 20s, with many linked to bars or social gatherings, according to Wednesday’s update. The rapid rise in cases is expected to continue without changes to the way people are distancing and using face coverings.

Two workers, one with OBI and one off the American Triumph, were ill enough to warrant hospitalization, state officials say. Many of the workers were transported to Anchorage for isolation. Concerns that the influx of workers could max out Anchorage’s ICU capacity was one reason Mayor Ethan Berkowitz announced new bar and restaurant capacity limits last week.

The federal report notes, however, that Alaska’s new cases per 100,000 put the state in the “yellow” zone and the state is in the “green” zone for its test positivity rate below 5%, although the state’s rate is rising.

The state is in comparatively better shape than others: Alaska had 73 new cases per 100,000 population in the past week, compared to a national average of 140 per 100,000.

On Wednesday, Alaska reported 91 new cases of COVID-19 statewide involving 67 residents and 24 nonresidents, according to the state COVID-19 dashboard. There were 34 people hospitalized with COVID-19 around the state.

Of the new resident cases, 51 were in Anchorage and one in Eagle River; four were in Wasilla; two in Fairbanks; two in Kenai, one in Homer and two in Soldotna; one in Valdez; one in Juneau; and one in a smaller community in the Prince of Wales-Hyder Census Area.

Among nonresident cases, the state reported 12 in Seward and two in Soldotna; two in Palmer; four in Juneau; one in Valdez; and three in unknown locations.