Alaska reports 100 new COVID-19 cases; almost all are in residents 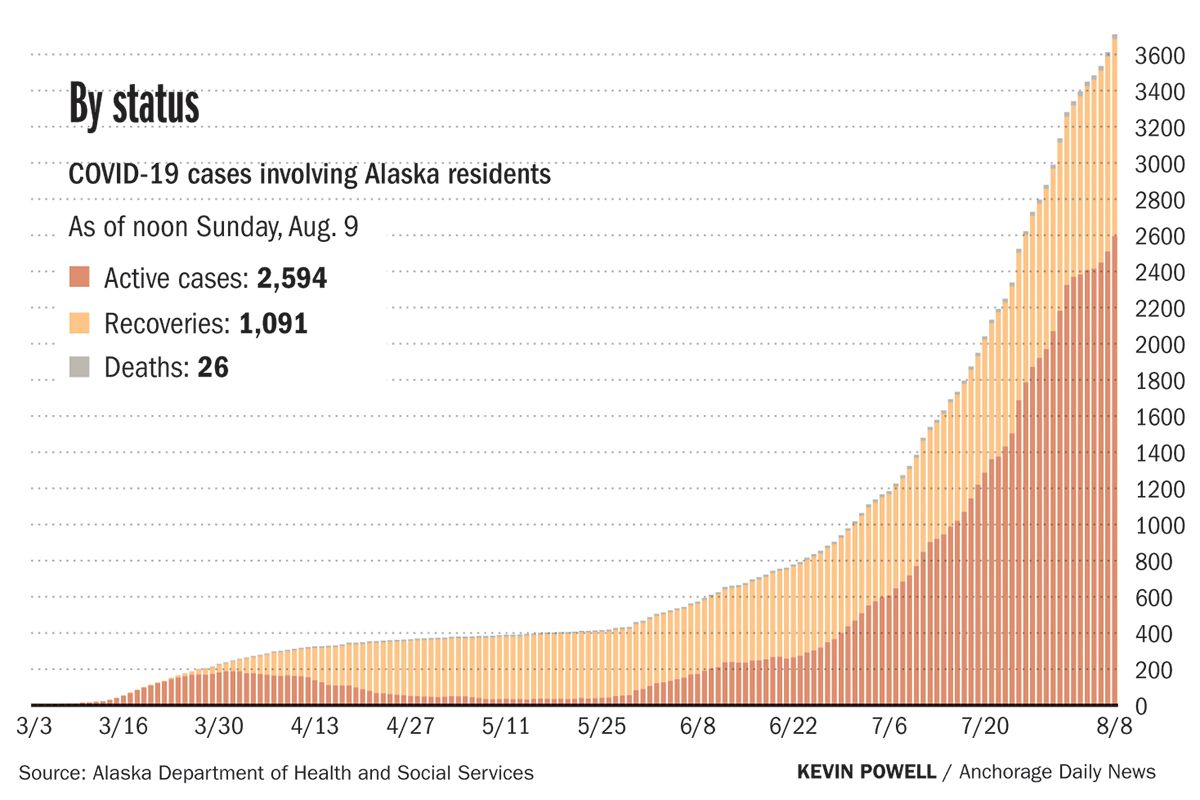 As the number of active COVID-19 cases in Alaska continues to climb, the state reported 100 new cases Sunday and three new hospitalizations, according to data from the Department of Health and Social Services.

That brings the state’s total active cases to 3,178, with 1,590 currently active in Anchorage. More than half of the new cases are in Anchorage; 59 cases were reported there Sunday, including two in Eagle River and two in Chugiak.

The state reported 16 new resident cases in the Matanuska-Susitna Borough; of those, eight are in Wasilla, three are in Willow, two in Palmer and one each in Big Lake, Houston and Sutton-Alpine.

Two of the 100 new cases in Alaska reported Sunday are in nonresidents, according to state data. One of those is in Fairbanks and the location of the other nonresident is under investigation, according to a news bulletin Sunday from the heath department.

As of Sunday, the state has had a total of 4,473 confirmed cases in residents and nonresidents since the pandemic began and 156 people have required hospitalization. Of the total cases, 1,269 are recovered or presumed recovered.

Thirty-two people are currently hospitalized with COVID-19, with another 9 hospitalized who are under investigation of having the virus, according to an emailed bulletin from the health department.

There have been 26 Alaska resident deaths associated with the virus, including one reported by the state on Saturday in Anchorage. The state reported no deaths on Sunday.

Coronavirus cases have continued to rise in the state since it began reopening in May. A large portion of the cases are in Anchorage, where Mayor Ethan Berkowitz issued an emergency order that went into effect Monday and enacts a “four week reset,” which closes all bars, and closes restaurants and breweries to indoor dining.

Health officials in Anchorage have warned that the city’s intensive care unit capacity could be overwhelmed by mid-September if cases continue to rapidly increase. Twenty-five people in Anchorage are currently hospitalized with COVID-19, with another seven hospitalized and under investigation of having the virus, according to the state’s data dashboard.