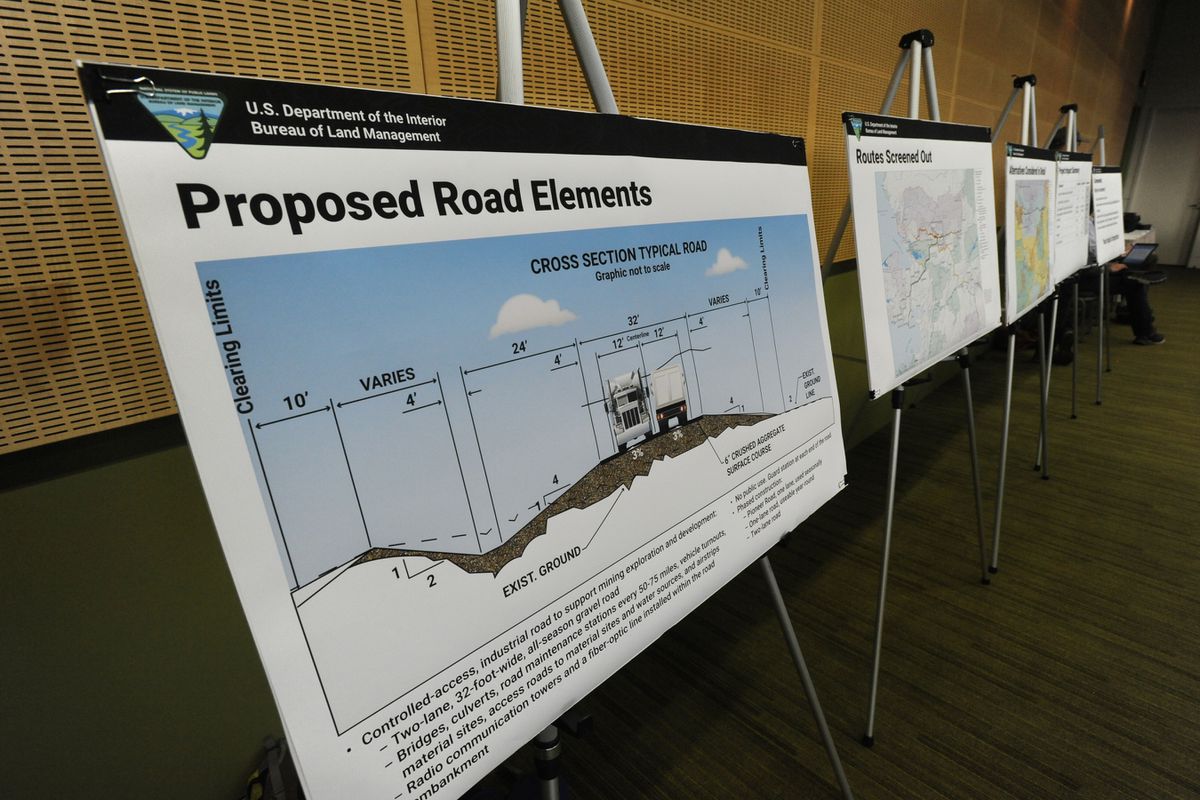 BLM held a public meeting/hearing on the proposed Ambler Road Draft EIS at the Dena'ina Center in Anchorage on Sept. 10, 2019. (Bill Roth / ADN)

BLM held a public meeting/hearing on the proposed Ambler Road Draft EIS at the Dena'ina Center in Anchorage on Sept. 10, 2019. (Bill Roth / ADN)

A tribal consortium and five tribal governments in Alaska are suing the federal government to stop the 200-mile so-called Ambler Road that would carve through wilderness in Northwest Alaska to support mining in a mineral-rich district.

The Tanana Chiefs Conference, representing 42 tribes in Interior Alaska, said in a statement on Wednesday that a federal review of the project’s impacts to the region was “rushed, flawed, premature, and inadequate."

The 134-page filing was made Wednesday in federal District Court in Alaska. TCC and tribal governments for Alatna, Allakaket, Evansville, Huslia and Tanana filed the lawsuit.

They name Chad Padgett, Alaska director of the Bureau of Land Management, and David Hobbie, Alaska region chief for the U.S. Army Corps of Engineers, as well as other federal officials and agencies in their filing.

The BLM, in a joint decision with the Army Corps, issued a federal permit for the road in July. The tribal organizations want that decision invalidated.

“The decision whether to construct the Ambler road has huge implications for the people in the region as it could lead to multiple mining projects in the area which could harm the health of the people and wildlife resources, and potentially open the entire country to easy access from the road system,” said Victor Joseph, chief of Tanana Chiefs Conference. "The concerns about these issues were not addressed by any of the government entities involved in the decision to approve the road.”

The proposed gravel road would link Alaska’s skeletal road system north of Fairbanks to the Ambler Mining District, ending near Ambler and other villages. A portion of it would cross the Gates of the Arctic National Park and Preserve.

The road is expected to cost at least $500 million. The state agency has said AIDEA funds and bonds could be combined with private investments to pay for the road. The agency has said it will get a commitment from mining companies that they will repay costs.

In a statement, the BLM said it stood by its environmental review, which it said “provides access to the world class and strategically important Ambler Mining District."

“During the course of this analysis, the BLM held over 35 public meetings in affected communities along the route throughout this three-year process. Our commonsense actions are lawful and based on the best available science. The Department will continue to implement President Trump’s agenda to create more American jobs, protect the safety of American workers, support domestic energy production and conserve our environment. We are confident the Courts will agree.”