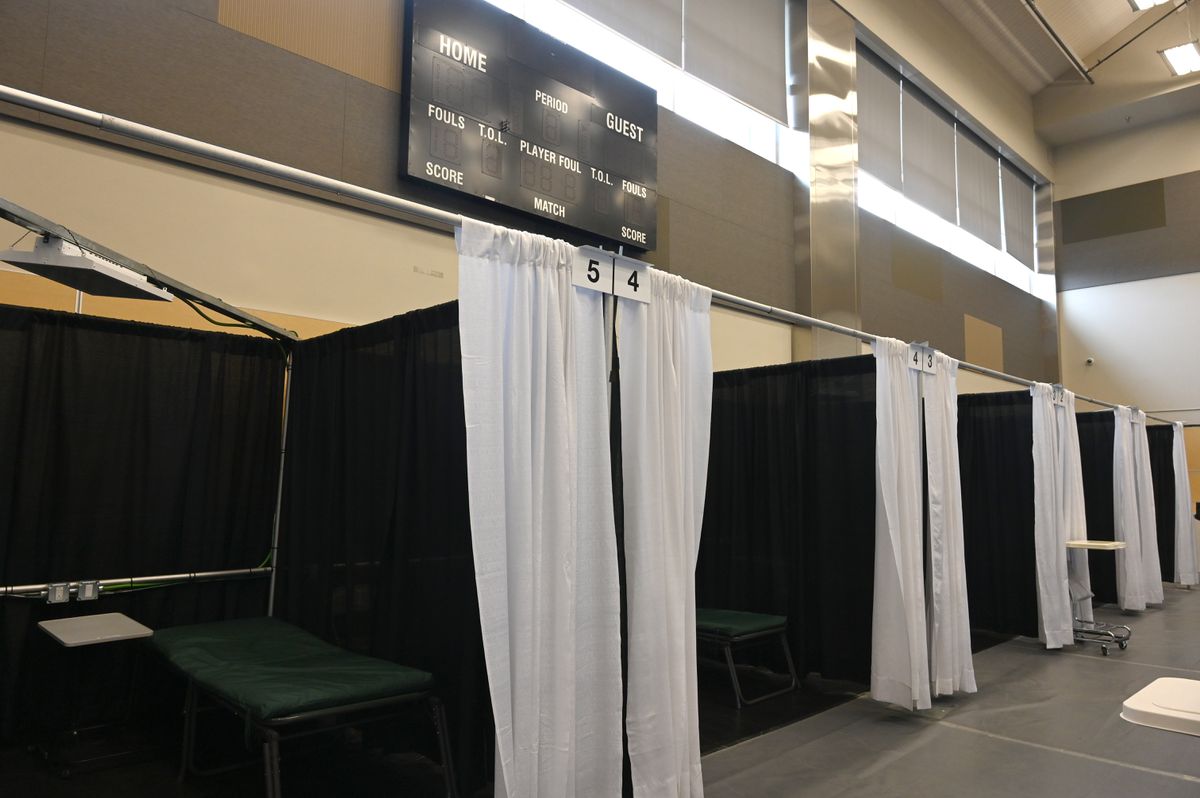 Representatives from multiple entities gave a tour of the alternate medical care facility in the Alaska Airlines Center at UAA on April 21, 2020. (Anne Raup / ADN archive)

Representatives from multiple entities gave a tour of the alternate medical care facility in the Alaska Airlines Center at UAA on April 21, 2020. (Anne Raup / ADN archive)

COVID-19 cases are surging across Alaska and across the country, and the state’s top health officials are expressing concern over Alaska’s stretched health care capacity.

Even before the pandemic, health care was stretched thin in Alaska. It’s a big state, and distance adds a layer of challenge in treating people, the state’s chief medical officer, Dr. Anne Zink, said during a Saturday interview. In winter, some communities can get weathered in. The state also lacks medical specialists, particularly in rural areas, according to Zink.

As cases have climbed in recent weeks, Alaska hospitals have not been overwhelmed with COVID-19 patients. Throughout the pandemic, Alaska has had one of the lowest COVID-19 mortality rates in the nation.

But health officials are still bracing for a rise in hospitalizations and deaths, which are both considered “lagging indicators” that follow the trend in new cases.

[Why is Alaska’s COVID-19 death rate among the nation’s lowest, even as cases surge and hospitalizations keep rising?]

It’s critical that hospitals have enough space to care for people because with less space, patient outcomes are worse. Unlike an earthquake or some other sudden, finite emergency, COVID-19 hospitalizations can be like a spout that won’t turn off, Zink said.

“We’ve always had a really limited health care infrastructure and really rely on prevention, as well as communities working collectively,” Zink said. “And I just want to be open and transparent about what our system looks like.”

Alaska is a hard place to recruit health care workers, according to Zink. People working in medicine tend to train in more urban areas with a lot of support — a kidney doctor to help with kidney issues, a heart specialist for heart problems.

“But in Alaska, you don’t have that," Zink said. "And so it’s a really hard place to work.”

Add on top of that the mental and physical fatigue of a pandemic, and Zink said the state is seeing more health care workers leave the state and fewer nurses who want to come and work here in the first place.

“That is something I’m really concerned about this fall and winter moving forward,” she said.

And even among workers who are here, “burnout is huge.”

“It’s not subtle, and it’s real, and it’s tangible," Zink said. "And we know that it has impacts on everything from productivity to availability.”

Burnout can be attributed to several factors. During the pandemic, there’s been a heightened sense among some workers of feeling like they’re not making a difference, Zink said: Health care workers witness a “tidal wave of patients” headed toward hospitals and may feel they have little ability to minimize that.

Compounding that, health care workers — especially nurses — have taken on a serious emotional burden. When people cannot gather in the room where a parent might be sick, according to Zink, a provider often takes on both the physical toll of caring for that person and the emotional toll of their suffering.

“It’s heart-wrenching,” she said. “It’s like, ‘Man, what could I have done to prevent this case so that you could breathe better?’ ”

Even if the patient is someone who will end up all right, it’s hard to watch the suffering, she said.

“And right now, there’s a lot of suffering going on,” Zink said.

Back at the start of the pandemic, hospitals and emergency operations centers helped stand up alternate care sites, including the Alaska Airlines Center in Anchorage and the Carlson Center in Fairbanks, to care for a potential influx of patients.

Determining when the state would need to open up one of those sites involves several steps, Alaska public health director Heidi Hedberg said in a Saturday interview. Hospitals internally monitor how full they are and how much staff they have.

They can pause certain procedures and move staff around, said Jared Kosin, president and CEO of the Alaska State Hospital and Nursing Home Association, during a Thursday call with reporters. But even with those movements, there’s not enough people to staff beds outside of the hospitals.

The CEO of Providence Alaska Medical Center said as much in a recent Anchorage city briefing, describing how there wasn’t enough staff in the city to open the Alaska Airlines Center and provide moderate care to patients.

“We have all these alternate care sites, in theory, and they’re ready to go," Kosin, with the hospital assocaition, said. "But the question is, will we have staffing? And it’s a major, major limiting factor.”

If hospitals have gone through all their trigger points, the state and hospitals together would decide to open one of the care sites, Hedberg said. It takes 48 hours to activate them, she said.

Zink also said it’s important to make sure people can leave the hospital, either to go home or go to a skilled nursing facility. Alaska has the fewest nursing home beds per capita, she said. That means it can be hard to actually discharge people from hospitals.

“We can’t just think about an alternative care site,” Zink said. “You have to think about every part of a person, from the moment before they’re exposed to the disease, minimizing their exposure to disease, minimizing how much virus they have, seeing when they get sick, seeing when they need to come to the hospital, having the resources there and then also seeing that they can get out of the hospital and they’ve got resources when they go home.”