On masks, Alaska Gov. Dunleavy tells local leaders to use power they say they don’t have 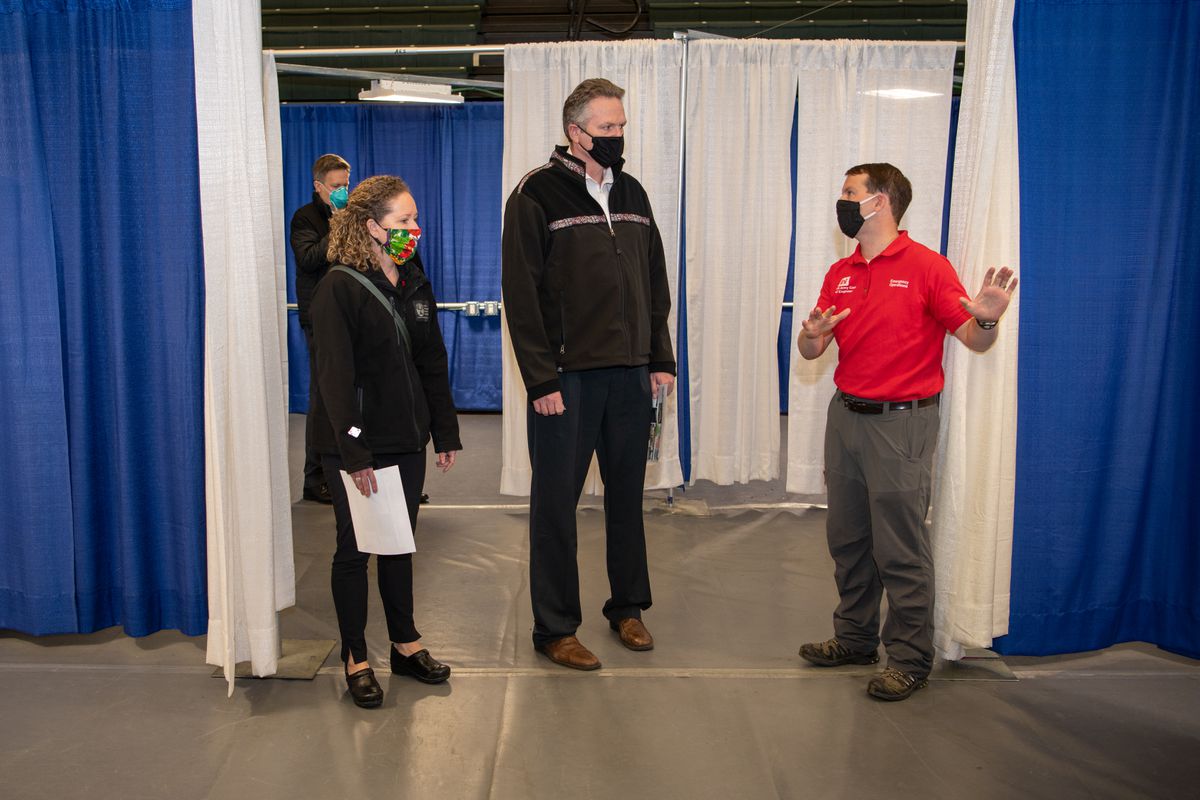 An array of public health experts say there’s robust evidence that masks limit the spread of COVID-19. And in Anchorage, one epidemiologist says a mandate may have reduced transmission by as much as 20%.

Over the last few weeks, Alaska’s case numbers have risen to record levels, and hospital capacity is shrinking. Huge swaths of the state still lack mask mandates, and public health experts say that such a measure can help reduce the spread of the virus without harming the economy — especially in contrast to steps like bar and restaurant closures.

While more than half of U.S. states have their own mandates for indoor public spaces, Republican Gov. Mike Dunleavy has resisted imposing one and maintains that such decisions are best made by local governments.

But municipal officials say there’s a problem with the governor’s position: They argue that Dunleavy is asking local elected leaders to exercise power that they don’t have. In both the Kenai Peninsula Borough and Matanuska-Susitna Borough — two of the places where COVID-19 cases are rising the most quickly — government officials say they lack the legal power to impose a mask mandate.

Dunleavy disagrees, saying that state attorneys have a different interpretation of Alaska law and arguing that local mandates would hold up in court.

Even if the Kenai and Mat-Su boroughs did have the authority to require mask-wearing, it’s unlikely that those conservative pockets of the state would take that step. But the dispute around municipal powers highlights how the lingering uncertainty has allowed both Dunleavy and local leaders to sidestep a difficult political decision that could slow infections and save lives.

“Politicizing it or not doing it because some people might be mad at you — that’s not the kind of leadership we need right now. What we need is a courageous stance,” said Dr. Tom Hennessy, an infectious disease epidemiologist at University of Alaska Anchorage and former CDC official who analyzed the effectiveness of Anchorage’s mask mandate — and who praised some of the aggressive early actions that Dunleavy took to fight the virus in Alaska.

Hennessy added: “We’ve got public health leaders in the United States and around the world saying this is a good idea. It’s safe, it’s effective, it’s cheap, it doesn’t put anybody out of a job, it doesn’t close any businesses, it doesn’t hurt anyone. It just helps protect people from getting infected or spreading the virus around.”

A ‘big question mark’ that risks a lawsuit

A number of Alaska cities have adopted their own mask mandates, including Anchorage, Juneau, Dillingham and Cordova.

But as cases spiked in the past week, Dunleavy’s chief medical officer, Dr. Anne Zink, said the virus is spreading fastest in the Mat-Su and Kenai Peninsula — two deeply conservative areas that have not mandated masks.

Dunleavy, a conservative Republican, wears a mask himself and believes they’re a “very important COVID-fighting tool,” spokesman Corey Allen Young wrote in an email. But at a news conference Wednesday, Dunleavy said that mask mandates are “best done at the local level” instead of statewide.

“Individual communities can do that. We would support that,” Dunleavy said.

But municipal officials and representatives say the reality is more complicated, and that state law and the Alaska Constitution dictate how much authority can be used by each type of local government.

“Home rule” municipalities like Anchorage, Juneau and Cordova can exercise any powers not explicitly barred by the Alaska Legislature, and their authorities are broader, said Nils Andreassen, executive director of the Alaska Municipal League.

But “second class boroughs” like the Kenai Peninsula, Mat-Su and Fairbanks North Star boroughs are different. Those boroughs, which function similarly to counties in other states, only have powers that the state has explicitly granted to them, although they can also add powers through a vote by residents.

That framework means that home rule municipalities have much firmer legal ground to impose mask-wearing requirements, while leaders of second class boroughs are wary of the risk and potential cost of a lawsuit challenging such mandates.

“When the risk is litigation, you’re more likely to avoid taking the risk. And that’s the situation that many municipalities might find themselves in,” Andreassen said. “There’s a big question mark of what powers they might have or could exercise.”

Further complicating matters is that certain cities have stronger powers to impose mask requirements than the surrounding boroughs that contain them: In Fairbanks, city Mayor Jim Matherly has said he’s reticent to require mask-wearing because it could drive commerce to businesses just outside the boundaries of his municipality.

Dunleavy’s administration argues that state law explicitly grants “disaster powers” to local governments that allow them to mandate mask-wearing. While second class boroughs can’t exercise “health powers” like licensing and safety inspections of facilities, that does not stop them from taking actions like mask mandates to respond to disasters, “even if the disaster is a health-related disaster” like a pandemic, said Young, the Dunleavy spokesman.

“Imposing a mask mandate, requiring social distancing, and limiting congregate settings are examples of how a local government can exercise disaster powers that are not ‘health powers,’” Young said in a prepared statement.

Officials from the Mat-Su, Kenai Peninsula and Fairbanks North Star boroughs all said this week that their local governments lack the authority to mandate mask-wearing. And even if they did, they’re far less equipped than Dunleavy’s administration to draft and enforce such public health measures, said Bryce Ward, the Fairbanks North Star Borough mayor.

The Fairbanks borough doesn’t employ public health nurses or any kind of public health staff, Ward said. Suggesting that the borough government develop a mask mandate, he added, is like “asking your accountant to be your contractor on a house.”

Nonetheless, Ward did not offer his own support for statewide or local mask-wearing requirements. And neither did local officials in places with quickly rising case rates like the Mat-Su.

“I don’t know anybody on the Assembly or the mayor who has said that they want any kind of mandates,” said Jesse Sumner, a Mat-Su Borough Assembly member. “It would be very unpopular.”

Even if Dunleavy adopted a statewide mask-wearing requirement, Sumner said he thinks compliance would be far from universal. But another Mat-Su elected official, Wasilla Mayor Bert Cottle, said he thinks a mandate from Dunleavy would carry significant weight with residents of the region.

“Everybody out here pretty much supports the governor and what he’s doing,” said Cottle. “If he mandates it, I think most people would follow the mandate.”

Wasilla, as a “first class city” lying within the boundaries of the Mat-Su Borough, has health powers, but it occupies just 13 of the borough’s 25,000 square miles, Cottle said. It’s seen a sharp spike in COVID-19 in the past two weeks; half of the city’s 900 confirmed cases since the start of the pandemic have come during that period.

Wasilla requires mask-wearing in municipal buildings but not in private businesses.

“At this point, unless I saw a big, big spike, and there were other circumstances around it, I think that’s up to the business person,” said Cottle. “We’re not close to that point right now.”

Others argue that the virus' presence has become so widespread across Alaska that it demands a statewide response like a mask mandate. Leaving public health decisions to policymakers in small municipalities is “dangerous,” said Democratic state Rep. Tiffany Zulkosky.

Zulkosky works for the tribal health-care provider in the Southwest Alaska hub community of Bethel. Case rates in that region are among the country’s highest, and while Bethel has mandated mask-wearing, dozens of neighboring villages are each taking their own approach.

“While circumstances and different styles of policy and leadership may change from community to community, the impact of COVID-19 and how it’s affecting local populations is largely the same,” Zulkosky said. “The state of Alaska is really the only entity that has clear legal framework in which to respond and put forward mandates that are enforceable.”