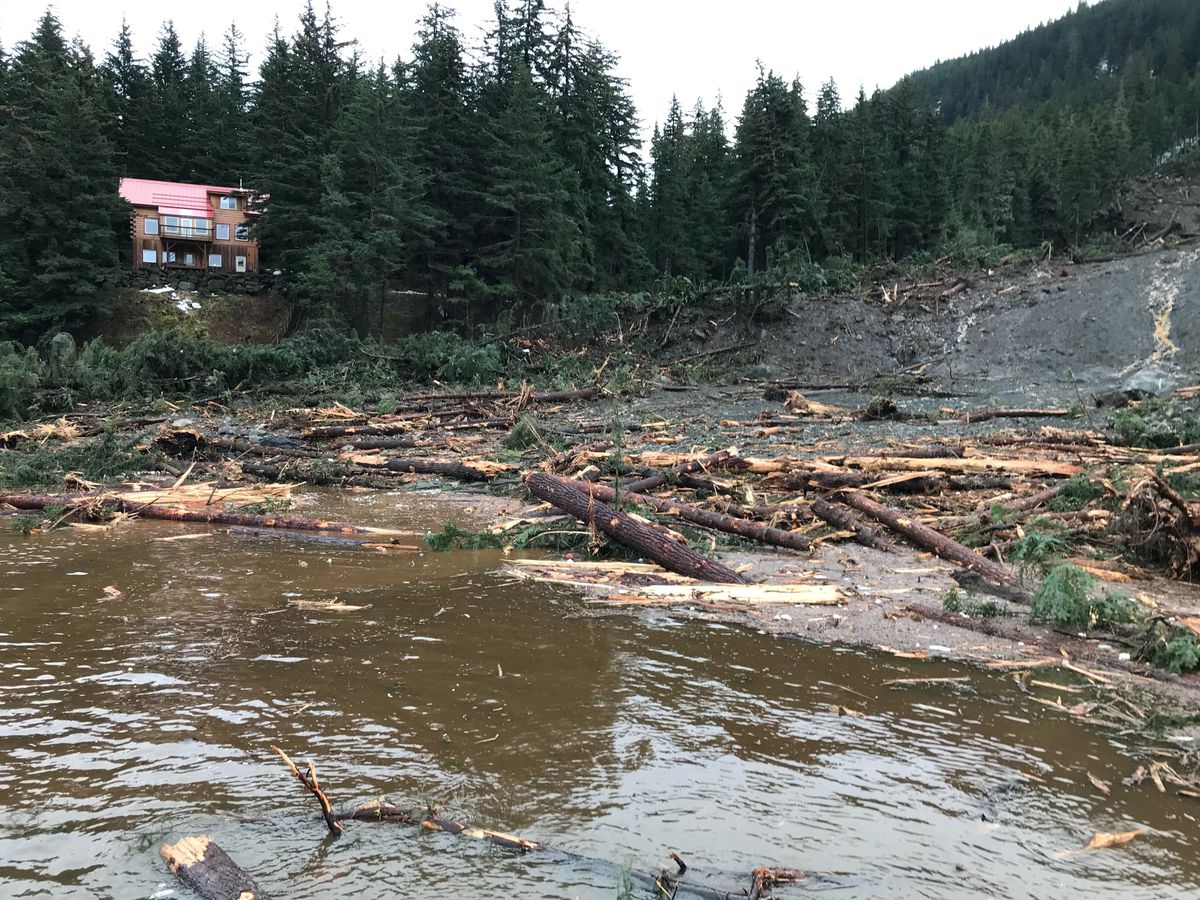 HAINES — Two people remained missing Friday after this week’s major landslide in Haines despite a third day of search and rescue efforts conducted amid rain and snow.

Meanwhile, more homes were evacuated under the threat of additional landslides and local hotels are being stretched to house displaced residents, Mayor Doug Olerud said. City officials estimate 50 households have evacuated across Haines.

Two rescue dogs and additional search teams worked throughout the day from the water and shoreline in an attempt to find 23-year-old kindergarten teacher Jenae Larson and 30-year-old business leader David Simmons.

David Simmons and Jenae Larson have been missing since Wednesday afternoon's mudslide in Haines. https://t.co/fYL5ZgxFre

Simmons’ home was in the direct path of a 600-foot-wide landslide, and Larson lived in an apartment above Simmons’ garage. Both were believed to be home at the time.

Simmons’ girlfriend, Libby Jacobson, described him and Larson as “outstanding people who were driving forces for young people in Haines.”

With the ground in the core area of the slide too unstable for work on foot, search efforts have been limited to the beach, plus helicopters and boats. Local volunteers have been reinforced by Alaska State Troopers, Alaska National Guard, the U.S. Coast Guard and search teams from Juneau, Olerud said.

[In photos: Haines grapples with landslides and flooding after a record-breaking storm]

Commercial flights have been limited by bad weather, and the town received additional heavy equipment and workers — including state geologists — on the state ferry LeConte, which arrived Friday morning.

“The state has been overwhelmingly responsive,” Fullerton said.

The City and Borough of Juneau shipped a specialty truck by ferry to help Haines with its sewer system, the state transportation department hired a landing craft to carry additional heavy equipment and the Yukon government has also offered aid.

Olerud said both Gov. Mike Dunleavy and the state’s congressional delegation have been “tremendously helpful” in opening aid channels that can pay for repairs.

Another storm is expected Sunday, Fullerton said, and the city is trying to put out the “fires” that it has right now.

“The hardest part is that we have overlapping emergencies. We still have a COVID emergency,” Fullerton said.

Haines has no active virus cases, but officials are worried that aid workers will bring cases into town. All response workers are being asked to take a rapid COVID-19 test as a precaution.

In addition to the biggest landslide, smaller slides have taken place across the area. Rescue workers who arrived on the ferry passed at least a dozen debris flows as they drove a road that had been cleared for their arrival.

Larson is in her first year teaching kindergarten at Haines’ school after graduating from the University of Idaho earlier this year.

The start of her teaching career marked a return home for the 23-year-old, who grew up in Haines and was among the 22 members of the town’s 2016 high school class.

“She was just around little kids all of her life, and I guess instead of hating it, she loved it, and that’s what she decided to do as a career,” said Matt Boron, whose family remains close friends with Larson’s.

Alisha Young grew up with Larson and called her a “little sister.” She talked with Larson on FaceTime an hour before the landslide.

Larson was home, Young said, because schools were closed and the city asked residents to stay home.

“That’s where it was supposed to be safe,” she said.

Simmons grew up in Chico, California, and friends and family describe him as “gregarious.” He’d traveled to 77 countries before settling in Haines in 2017. He initially visited the town to visit his cousin and work at the pizzeria she planned to open, which is now Alpenglow.

Simmons has worn many hats in Haines, beginning a small shuttle service company between Haines and Whitehorse, Yukon, called Hinterland express, and most recently as part-time director of Haines Economic Development Corp., where he was appointed Aug. 1.

He bought his house on Beach Road in April — a home he shared with girlfriend Jacobson — and worked with his dad last winter to build the apartment rental above the garage that Larson and her boyfriend lived in.

His father, Randy Simmons, described his son as empathetic, understanding and friendly. The two spoke often, most recently on Wednesday, about two hours before the slide took Simmons’ house into the water.

“There are characteristics of David that I aspired to emulate,” Randy Simmons said. “He was always open and understanding and empathetic and people are drawn to that. He makes people feel special. David never met a person that wasn’t his friend.”

As the search for Simmons and Larson progressed this week, another evacuation was authorized by Haines police Thursday night — this time at an area 1.5 miles the town proper.

“There were some worries about a potential flood and landslide in that area,” Mayor Olerud said. “We decided to do the evacuation out of an abundance of caution.”

Hotels, private Airbnbs and businesses in town have opened up to house displaced residents. Thirty-one rooms at The Captain’s Choice Motel and 50 at Aspen Hotel are at capacity, according to their respective employees. A third motel in town, Eagles Nest, opened last night to give displaced residents a bed to sleep in. Motel owner Janis Horton said there are seven vacant rooms.

The Red Cross is paying for locals to stay at various hotels in town, hotel and motel employees confirmed.

Haines officials said if people outside Haines want to help with the recovery, they can donate to a Gofundme that has been set up by a local resident. Proceeds are being directed to the local Salvation Army, which will distribute them to people who have been affected by the disaster.