As COVID-19 vaccines arrive in Alaska, the state’s top doctor reflects on ‘a big changing point’ in pandemic 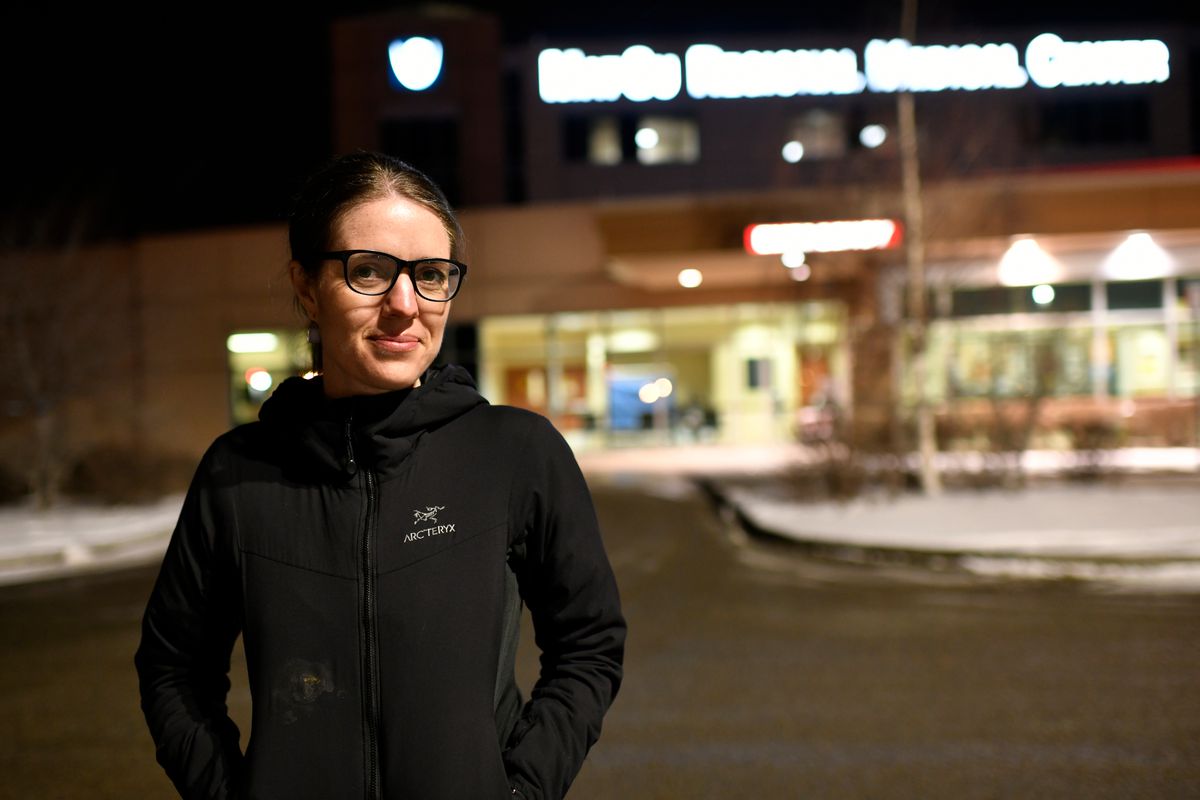 PALMER — She is widely viewed as the face of Alaska’s COVID-19 response, inspired her own hashtag (#thinklikezink) and nabbed a spot on InStyle’s list of the top 50 female health care workers.

But when it came time to join other front-line hospital workers getting the state’s first batches of vaccine, Dr. Anne Zink showed up dressed like any other emergency room physician at work: in blue scrubs and a surgical mask.

Zink arrived at a small conference room at Mat-Su Regional Medical Center on Friday evening. It was just days into Alaska’s rollout of a vaccine that has the potential to end the COVID-19 pandemic, and the state’s chief medical officer was one of the many health care workers lining up for the shot.

But a day earlier, Zink said deciding to receive it was a challenge. She wondered if she should pass on the first go-round and allow someone else to get it first.

“I feel kind of guilty, honestly, for getting it now,” she said Thursday on the eve of her vaccination.

She wished the state had more vaccine to give out, she said. It’s hard that not everyone can receive it at once. She felt sad about all the people who have been lost to the illness, and cautioned that the state still has a long road ahead.

Zink had been serving in the role as Alaska’s top doctor for less than a year when the pandemic began its march around the world and across the state. She also still practices emergency medicine at the hospital near Wasilla, which makes her eligible for the vaccine.

Ultimately, Zink decided to get the vaccine because she faces the danger of coronavirus exposure on the front lines and because she felt it was important to set an example for the rest of Alaska.

Two months ago, before it was clear how effective the vaccine really was, Zink said she worried that she might feel conflicted about the shot if it was rushed or pushed out before it was ready.

“I think one of my really big fears was a vaccine coming out that the data would be iffy on,” she said.

Now, she says, she has no hesitation. As a health care worker, it will provide her an added layer of protection as she sees patients. She doesn’t have to rely solely on protective gear like her N95 mask to ward off the virus.

So on Friday evening — Zink’s birthday — she rolled up her sleeve to receive what she called the best present ever.

“I just feel really hopeful,” she said afterward. “I feel like this is the beginning of a new chapter.”

Zink has become one of Alaska’s most recognizable public figures in 2020. She conducts weekly Zoom calls and has been featured in numerous press conferences with Gov. Mike Dunleavy and other government officials. She’s proven a popular leader in Alaska’s health care community and beyond.

“There’s a lot of politics and there’s a lot of noise and lot of publicity and the rest of it,” she said. “But at the end of the day, all I want to do is what’s right for patients, and so I just try to stay focused on that part.”

Lately, that noise has come in the form of angry emails and social media posts. From demanding and loud emails about mask mandates to questions about testing, getting worked up over it doesn’t help.

She said it’s important to hear people and she has a process to respond, but she doesn’t want to get distracted from her response to the pandemic. So, Zink said, she’ll forward emails to the right committees and make sure information gets shared with the right people.

Zink points to one experience she had during her medical residency in Utah as a meaningful lesson in filtering out distractions. A patient came into the emergency room and his heart had stopped as a result of a stab wound. Zink and the team opened up his chest, removed the blood from around his heart and got his heart to restart. Some later questioned the procedure. The 18-year-old victim lived and left the hospital a week later.

Zink, then 32, said the criticism upset and confused her. An attending physician responded with advice that would shape her professional outlook.

“Anne, you always have to do what’s right for the patient and remember that the rest is noise,” Zink recalled the doctor telling her. “You are going to have more noise than you ever thought possible in your career.”

On a recent weekday, Zink woke up at 5 a.m., went for a bike ride and was on her email by 6 a.m. She gets between 200 and 400 emails a day. And by 8 a.m. she had four simultaneous meetings scheduled. The day also included a meeting with the governor and Vice President Mike Pence, as well as a COVID-19 communications call, a media briefing, a podcast interview, a call about the fishing industry, a public call about large gatherings, a meeting with the Centers for Disease Control and Prevention and meetings with clinicians in Juneau and Soldotna.

“That’s kind of a mellow day, compared to most days,” Zink said.

Zink said her boots-on-the-ground experiences at the emergency department inform her work with the state.

Before she enters the emergency department, she puts on two masks and a gown — it makes things slower. Going in and out of rooms takes longer and everything is harder to do.

Similar to the onset of flu season, there’s a certain palpability when things begin to change in the emergency department, Zink said. When COVID-19 picked up at the hospital, they started seeing “case after case” of people with shortness of breath.

“And you’re nervous, honestly, every time you walk into a patient’s room,” she said.

And unlike some ailments, COVID-19 lacks treatment options. It’s hard to watch patients struggle and suffer.

“You can’t do much except for try to comfort them, and tell them you don’t know how it’s going to go and you’ll do your best,” Zink said.

Zink received a vaccine from Michael Alter, an emergency physician who hired her some 11 years ago. The vaccines, Alter said, are the only way for the world to get back to normal. He wishes more people understood that as well as what other health care professionals confront day to day, he said.

“A lot of people don’t know the pain and suffering that’s been going on behind our doors and doors of hospitals, all around the country they just don’t see that, but it’s real, and it’s devastating,” he said.

On the night Zink received the vaccine, she also vaccinated two of her colleagues, including Kim Jensen, lead unit secretary of the emergency room. She heard Zink was around the night she was set to get her vaccine, and asked if Zink would administer it.

Jensen lost someone to COVID-19 in the intensive care unit at Mat Su Regional. She contacted Zink.

“I reached out, even though she’s busy, and she was lovely enough to connect and stay connected with me,” Jensen said.

Zink left the hospital Friday night, the first of two COVID-19 vaccine doses in her arm. Alaska’s cases surged to new highs this month and hospitals are stretched thin. But Zink said the vaccine represented a reason for optimism. Its arrival in the state made her emotional.

“I’ve been in tears more times than I can count this week,” she said. “It just feels like a really big changing point, a big moment in this pandemic.”