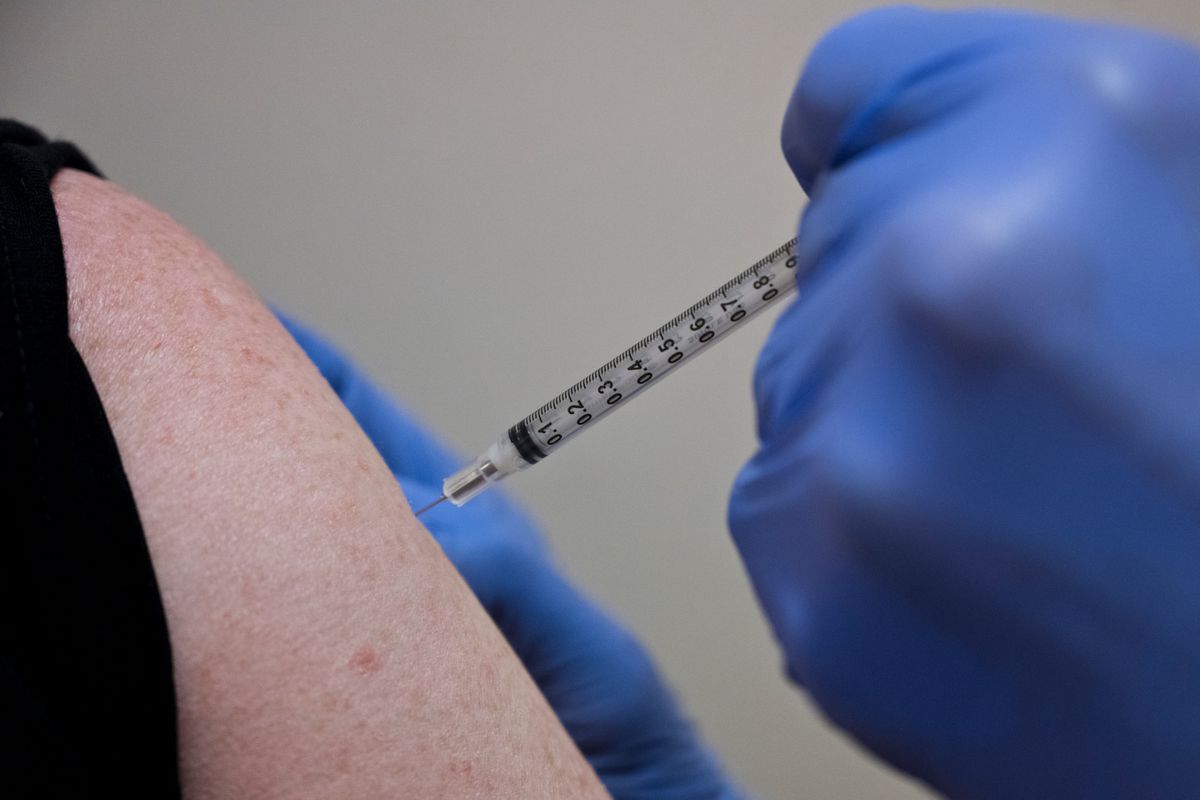 The reports of Alaskans over 65 failing to book a coveted appointment for a COVID-19 vaccine surfaced almost as soon as the state opened scheduling at noon Wednesday.

Appointment times essentially filled in less than half an hour, marking the latest snag in the state’s vaccine distribution following confusion over the weekend as to the timing of senior eligibility. The state announced Monday that it would allow seniors to get vaccinated as soon as next week instead of late January, as initially planned.

But many who visited the Alaska Department of Health and Social Services website on Wednesday shortly after the eagerly anticipated appointment window opened found no slots available.

The bottom line, health officials said, is that the state had limited appointments but a lot of people wanted one.

Time slots filled rapidly. By around 12:25 p.m. Wednesday, there were basically no appointments left, according to Tessa Walker Linderman, who helps run the state’s vaccination effort.

All vaccine appointment slots in Anchorage were filled by the end of the day Wednesday due to high demand, city emergency officials said in a statement, adding: “The Municipality will continue to work to add more appointment slots as soon as possible.”

Top officials with the Alaska Department of Health and Social Services at a media briefing Wednesday afternoon urged seniors to check back regularly to see if new slots open overnight or Thursday. And they’re planning to make the system better, acknowledging the confusion.

“If you did not get a spot today, it doesn’t mean there’s not a spot coming up, and we understand that it’s an imperfect system,” the state’s chief medical officer, Dr. Anne Zink, said during the call.

Frustration mounted through the day.

Bruce Botelho, a former Juneau mayor and Alaska attorney general, was among those who tried and failed to get a vaccination appointment in that city.

Botelho, who has no official involvement in the state’s vaccination effort, said the system wouldn’t let him select a date or clinic for an appointment. He tried calling Costco but the line eventually disconnected. Someone at the Juneau Public Health Center told him there weren’t shots available for seniors next week, he said. He contacted his state senator and the state’s health and social services commissioner’s office, but still didn’t get scheduled.

Botelho said he’ll keep trying the website but doesn’t plan to spend as much time on it next time.

“I’m hopeful that there will be some explanation because I’m sure my experience has been mirrored by hundreds of others in Juneau,” he said.

Anchorage resident Gail Burket said she and her husband set up at two separate computers and started trying to get vaccine appointments right at noon. They set an alarm.

The couple ended up on a waitlist.

“We were hoping there would have been a more central website instead of having to register at each place,” Burket said in an email.

Another Anchorage resident said she couldn’t access the state’s website right away. When she did, two hours in, Tok was the only place showing openings. A Mat-Su resident said she spent five days working the process but still ended up on a waitlist Wednesday.

State Sen. Jesse Kiehl, a Juneau Democrat, said he probably heard from two dozen constituents in a rush of frustration over what he called “a serious stumble in the rollout” of the state’s vaccine supply.

“I’ve been getting calls and texts and Facebook messages and email from seniors since a couple minutes after noon,” Kiehl said Wednesday afternoon.

State officials tried to reassure the public that vaccination distribution should smooth out as time goes on.

Every community is receiving vaccine doses based on population size, Walker Linderman said, but it might vary how each community uses them.

The goal, Zink said, is to have multiple places and dates available when someone gets online to sign up, but right now availability is limited.

Another challenge is the need for more places to administer vaccinations. The state is trying to add more providers of the vaccine to its registry, officials say.

There are thousands of potential providers around the state but as of Monday, only about 430 had enrolled, and not all had been activated.

Concerns voiced to state officials include the challenges of storing the vaccine, added pressure on staff, making sure they have enough space to ensure social distancing and finding ways to keep and monitor patients for at least 15 minutes as required.

Adding to the confusion, some people were able to get appointments for next made in the past few days — before the noon Wednesday window opened.

And some pharmacies including Palmer’s Fred Meyer store actually vaccinated seniors this week, before the official appointment window even opened and days before anyone was supposed to get scheduled for shots.

That’s because the state didn’t want to punish the seniors able to sign up for appointments over the weekend even though they weren’t eligible, according to Erin Narus, the health department’s pharmacy program manager. Officials told pharmacies to keep those people on the books.

“We could have drawn a hard line and canceled everybody, but that didn’t seem very sensitive to our seniors,” Narus said.

One Palmer resident said his wife got her vaccination at Fred Meyer on Wednesday morning. By afternoon at the store, signs directed people who had registered for shots to a corner of the store next to the Starbucks. A sign-in table was located near the sushi counter. A pharmacist in a white coat stood nearby.

Several pharmacies reported a deluge of phone calls Wednesday. The phone at the Palmer Fred Meyer was actually knocked offline for at least part of the afternoon.

At the Anchorage Costco on West Dimond Boulevard, patients calling for appointments were being told the pharmacy would not be providing vaccinations for people over 65 on Monday, despite the state’s approval of that schedule, because the store didn’t have the vaccine for them.

A pharmacy employee there reported “nonstop” phone calls on Wednesday.

Officials say they expect large-scale clinics this month, and that there’s a need for them in order to get people vaccinated quickly in larger groups.

If there’s enough vaccine available, the City and Borough of Juneau, Juneau Public Health Center and Bartlett Regional Hospital are planning to host a free COVID-19 vaccine clinic for health care workers and people 65 and older the weekend of Jan. 15. Appointment scheduling may be available as early as this Friday, officials there say.

Kiehl said events like that should give a frustrated public hope that there should be vaccine available even if on Wednesday it felt like the state was announcing a statewide sign-up when there were few appointments available in places like Juneau.

“Like everybody, we’re not getting all the doses we want but nobody in the state is,” he said.

Zink acknowledged the particular burden COVID-19 has placed on seniors in Alaska, given their increased vulnerability to the illness and continued isolation from many loved ones. She said the group is really excited for a vaccine but moving those over 65 up earlier in the vaccination schedule has created some anxiety and emphasized the importance of clear communication.

Zink said the state will continue to work on their end and noted the day was frustrating. But, she said, more vaccines are going out soon.

“You will get the opportunity to get vaccinated,” Zink said. “It is coming.”

Staff officials encouraged those with questions on vaccines to visit covidvax.alaska.gov or call 907-646-3322.

Hollander reported from Palmer and Krakow from Anchorage.