Alaska is having an exceptionally mild flu season, data shows 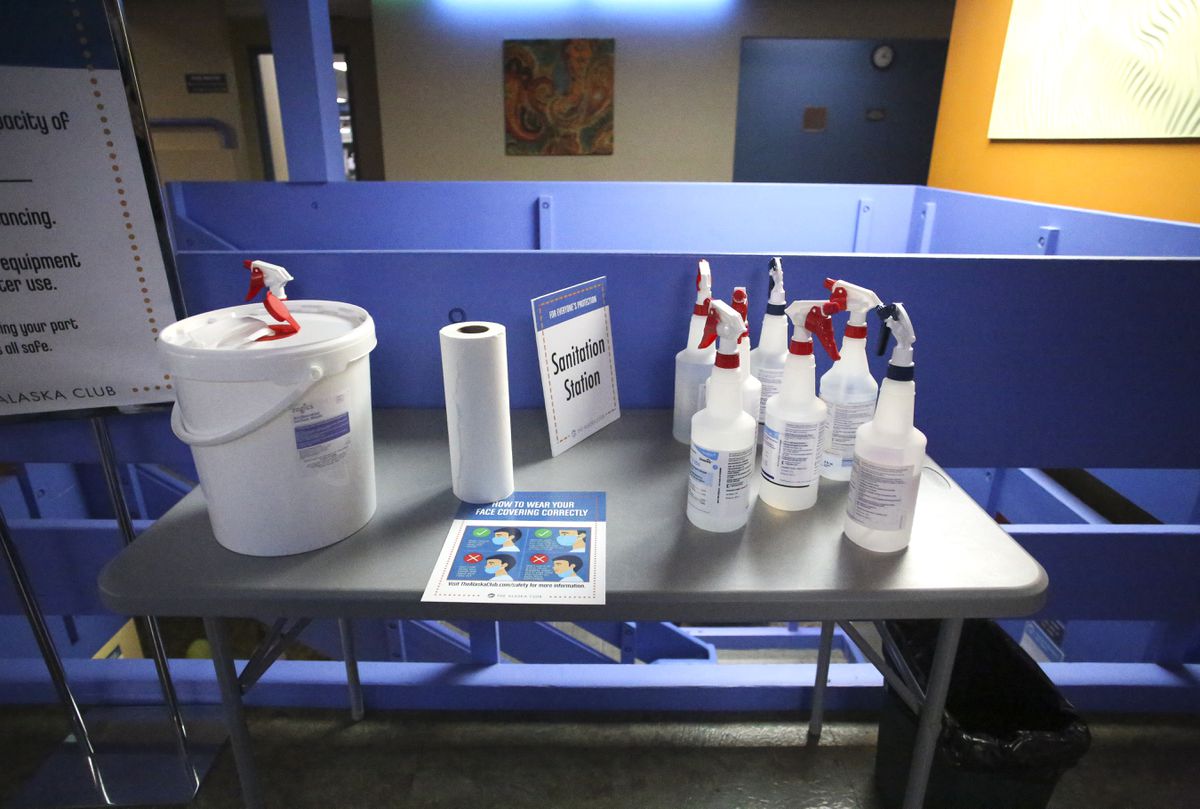 File photo of a sanitizing station set up in a weight room at The Alaska Club East in Anchorage on Sept. 10, 2020. Local health experts say one reason for the unusually mild flu season is likely virus-mitigation efforts that have been put in place to prevent the spread of COVID-19.(Emily Mesner / ADN)

File photo of a sanitizing station set up in a weight room at The Alaska Club East in Anchorage on Sept. 10, 2020. Local health experts say one reason for the unusually mild flu season is likely virus-mitigation efforts that have been put in place to prevent the spread of COVID-19.(Emily Mesner / ADN)

In the midst of a global health pandemic, Alaska has reported significantly fewer influenza cases than in any flu season in recent history.

Between October of last year and late February 2021, less than 100 influenza cases were confirmed statewide, according to data compiled by the Alaska Department of Health Human Services.

For comparison’s sake, by this point last year — during what has been described as a relatively mild flu season — that number was closer to 400. And the year before that, it was closer to 1,200, said Carrie Edmonson, a nurse epidemiologist with the state who compiles the state’s weekly “flu snapshot” report.

Last season, 13 Alaskans died with the flu. So far this year, just two influenza deaths have been recorded in Alaska, Edmonson said.

She and other local health experts say one reason for the unusually mild flu season is likely virus-mitigation efforts that have been put in place to prevent the spread of COVID-19, which have also prevented flu from spreading.

They also attribute the decline to less testing being done for the flu, and to more people getting flu vaccinations this year, thanks to strong public messaging by public health officials who worried that a large outbreak of influenza — a life-threatening respiratory illness that shares many of the same traits as COVID-19 — could put further stress the state’s fragile health care system.

Edmonson said she was surprised to see such low numbers of flu this year.

“But, given the fact that we’re in a pandemic for COVID makes a difference in the sense that people aren’t getting tested primarily for flu per se, they’re more focused on COVID,” she said.

Over the last year, most providers have been likely to send patients with flu-like symptoms to get a COVID-19 test, she explained.

“So it’s not that flu isn’t out there, it’s just they’re not being tested as much as usually are,” she said.

Although influenza and COVID-19 are both contagious respiratory illnesses, there are a few key differences.

They are caused by different viruses, and there are some symptoms that are unique to the coronavirus, like loss of taste or smell. The coronavirus has also been found to be more of a superspreader than the flu, and has so far been much deadlier.

The last flu season in both Alaska and across the country was mild. But it still sent over 740,000 people nationwide to the hospital, and resulted in somewhere between 24,000 and 62,000 deaths, according to preliminary data from the Centers for Disease Control.

In one year, the novel coronavirus has killed more than a half million people in the U.S. alone.

Victoria Miller, a nurse practitioner with Providence Express Care, said that so far this year, she hasn’t seen a single patient who has tested positive for the flu, despite testing for it in some cases.

In contrast, “I saw a lot of (flu cases) last year,” she said. “I was testing quite a bit for it, and I would see entire families with it.”

Alaska’s low flu numbers are part of a broader trend: reports to a federal, 25-year-old flu surveillance system operated by the CDC showed the U.S. was on track to having its mildest flu season in recorded history.

Just 1,701 cases of influenza have been reported by laboratories across the country so far this flu season, compared to over 225,000 cases recorded by this time last year.

Miller said the low flu numbers are an encouraging sign that what Alaskans have been doing to prevent the coronavirus from spreading has been working. She said she hopes people will keep up with some of those efforts even after COVID-19 becomes less of a threat.

“As nurses, we’ve been telling people to wash their hands for a long time,” she said. “So it’s nice to see people really doing that.”