‘It feels good’: Almost a year into the pandemic, Alaska is vaccinating everyone 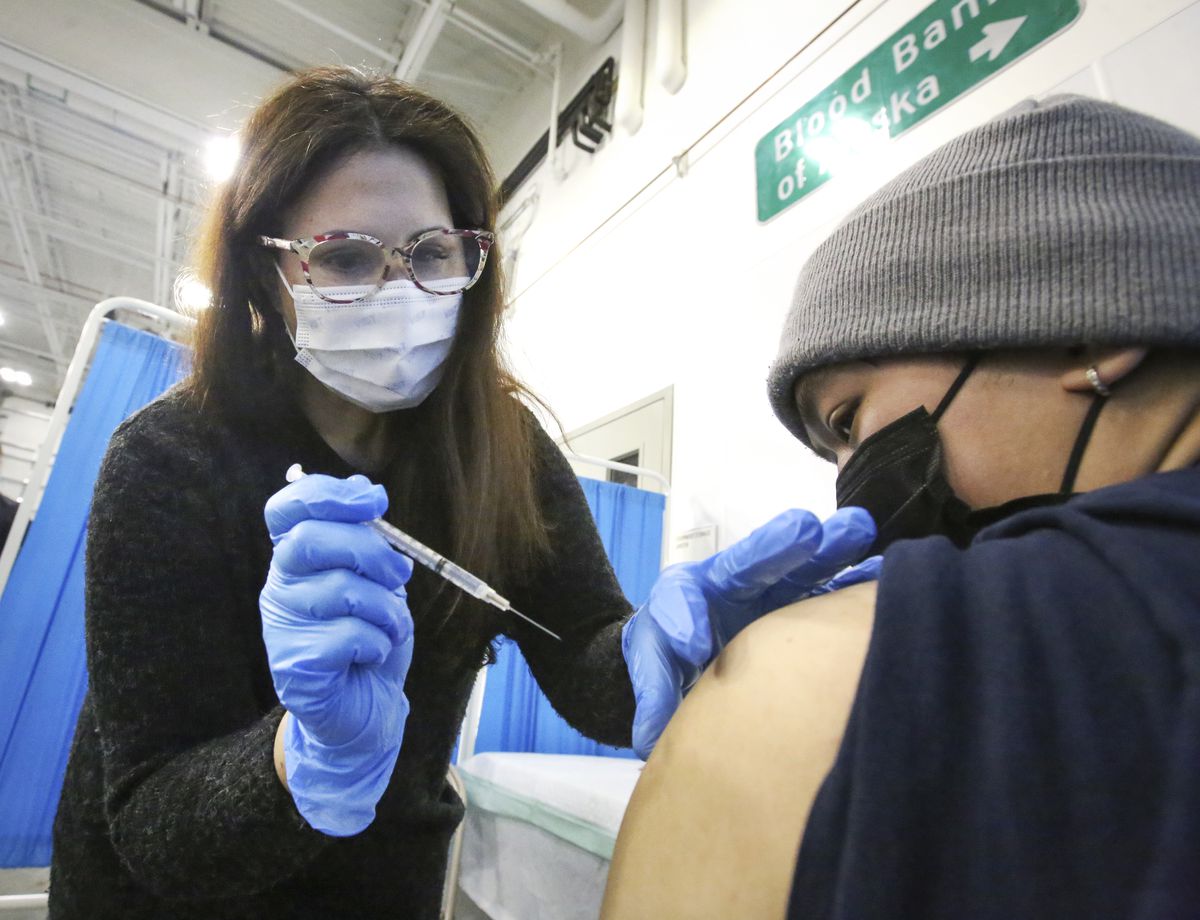 Barbara Brena administers the first dose of a Pfizer-BioNTech COVID-19 vaccine to Lesther Sudaria, 23, at the Blood Bank of Alaska in Anchorage on Wednesday. (Emily Mesner / ADN)

Barbara Brena administers the first dose of a Pfizer-BioNTech COVID-19 vaccine to Lesther Sudaria, 23, at the Blood Bank of Alaska in Anchorage on Wednesday. (Emily Mesner / ADN)

Newly eligible Alaskans sat down for their first COVID-19 vaccines in Anchorage on Wednesday, a day after the state announced that anyone age 16 and up was eligible for a shot.

Eric Packer, 30, and his girlfriend Gabriella Serventi, 28, were among the newly eligible Alaskans receiving their vaccine Wednesday afternoon. The two signed up for slots at the Blood Bank of Alaska clinic in Anchorage after hearing the news Tuesday night.

While filling out paperwork and waiting for Serventi to arrive, Packer said he hadn’t been expecting the wider eligibility.

“As soon I found out, we signed up in five minutes,” he said.

After their shots, Packer and Serventi sat side by side in the post-shot waiting area of the blood bank’s clinic.

“What a great date,” Serventi joked.

And while it may be their first vaccination date, it isn’t their last. The two have another scheduled for their second dose in a few weeks.

On Tuesday, Alaska became the first state in the nation to open up vaccinations to everyone. Specifically, anyone who lives or works in the state is eligible for a vaccination.

Statewide Wednesday evening, some appointments in several Alaska communities — from Kenai to Ketchikan to Valdez and Sitka — remained unfilled, according to a vaccine appointment list that shows some, but not all, providers in the state. More appointments statewide were expected to be added Thursday afternoon.

In Fairbanks, around 150 appointments for this weekend’s mass vaccination clinic at the Carlson Center were still available Tuesday night, but by morning they had disappeared, according to Kyle Wright, co-incident commander of the Interior Alaska Unified Command.

Like before, widening the eligibility groups led to an increase in vaccine demand before later tapering off, he said.

“I think we’re going to see a big surge of demand here,” Wright said. “A lot of people are wanting shots.”

And in Juneau, it makes sense to have such a broad, open tier, said Mila Cosgrove, deputy city manager and incident commander for Juneau’s emergency response. The city has just shy of 80% of its 65-and-up population vaccinated. Plus, the new guidelines simplify communications.

“At this point, we can just say, ‘If you’re 16 and above, grab an appointment, let’s get you taken care of,’ ” Cosgrove said.

Juneau didn’t see vaccine appointments get snapped up for the big clinic overnight, she said, because there hadn’t been any available. Juneau will be finished with its March vaccine allocation at those clinics between March 11 and March 20. By the end of the month, they project to have about half of people age 16 and above with at least their first dose in Juneau.

Kamrie Mayes, a junior at Anchorage’s East High School, sat for the allotted 15 minutes after her shot at the Anchorage Neighborhood Health Center on Wednesday afternoon. She’s newly eligible, and was at the center because of a canceled appointment. Mayes had heard from her mom the night before that people ages 16 and up were now eligible.

Every vaccination is another step towards normal and a completely open economy. https://t.co/cmi4uuOx9m

Ever since spring break a year ago, many students haven’t been back in the classroom which has taken its toll. As a junior, Mayes is going back to school soon.

“I haven’t been motivated, I haven’t done anything,” Mayes said. “Now that I can get the vaccine and I can go to school makes me feel very happy.”

Nashel Bradford, 16, sat in the Blood Bank of Alaska’s waiting area after receiving her first dose. Bradford said she was a bit nervous before, she expected the shot would hurt more than it did. She’s a sophomore at West High School and her mom signed her up the night before, Bradford said.

She’s looking forward to getting back to the activities she enjoys, like Polynesian dancing, which she hasn’t really been able to do since the pandemic set in. And she said she thinks others should get the shot too.