From airports to high schools, Alaska’s vaccine coordinators are working to ‘go where the people are’ 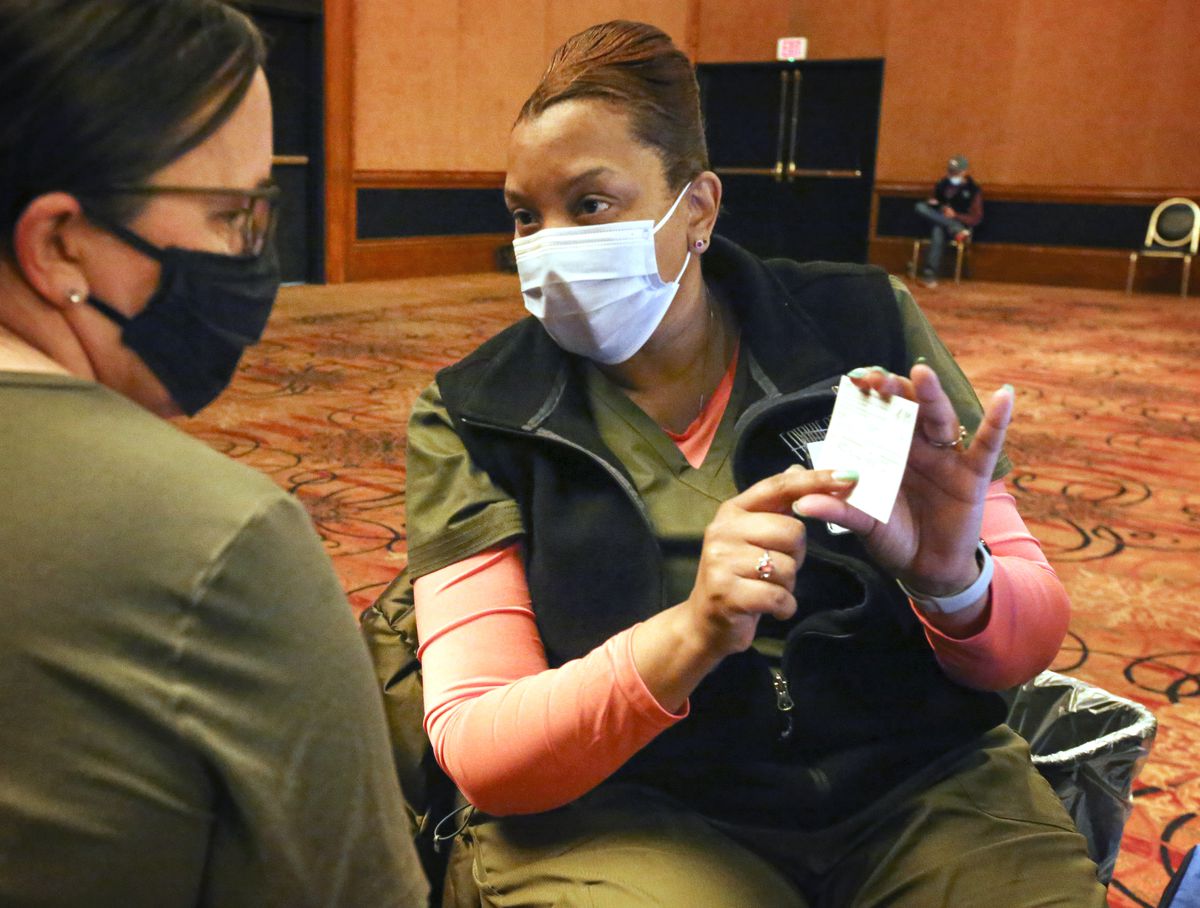 Registered nurse Shawnece Stovall explains the vaccination card to Carmen Jones before she administers Jones' first dose of the Pfizer-BioNTech COVID-19 vaccine at a clinic set up in the Discovery Ballroom at Hotel Captain Cook in downtown Anchorage on Wednesday. (Emily Mesner / ADN)

Registered nurse Shawnece Stovall explains the vaccination card to Carmen Jones before she administers Jones' first dose of the Pfizer-BioNTech COVID-19 vaccine at a clinic set up in the Discovery Ballroom at Hotel Captain Cook in downtown Anchorage on Wednesday. (Emily Mesner / ADN)

The effort comes at a critical moment in the pandemic, as more contagious versions of the virus continue to spread and the state races to vaccinate Alaskans before transmission intensifies.

Among those strategies is one that seeks to potentially vaccinate incoming travelers at the state’s four busiest airports.

Alaska, a state with a flood of seasonal and nonresident workers as well as many tourists who rush into the state over the summer, is seeking vendors to vaccinate people arriving at some of its airports, according to a document released by the Department of Health and Social Services on Wednesday.

The state is trying to set up the clinics before tourism season ramps up, Hedberg said. The program would also vaccinate an incoming workforce heading to more remote parts of the state. Reducing the spread of the virus is especially important as travel into the state balloons during the summer and early fall months.

On top of efforts to potentially vaccinate people at airports, state health officials said this week that they’re working to get more vaccines at family medical practices, where people regularly see their doctor, and noted a new federal program to provide vaccines at dialysis centers announced Thursday.

“We’re just trying to go where the people are,” she said. “Everyone knows that our schools are the center of our communities.”

The district has already hosted one vaccine clinic at a high school with another set up for Friday, the day that secondary schools are not in session, Morrissey said. The school clinics — like an upcoming event at Redington High School, situated far down Knik-Goose Bay Road — help increase access to the vaccine, especially for those who may not want to make an otherwise long trek to get a shot.

In the Mat-Su, the pace of interest in vaccines has slowed somewhat, Dillow said. It’s likely that those who were eager to get the vaccine have already received it by now.

“There’s still a lot of people who want it,” she said. “But it’s a little difficult sometimes to break away from your regular routine in your life. And so we’re going into the places where people live and work and offering it closer to home and more on a walk-in basis, so that it just makes it a little easier to access.”

In Anchorage, Christy Lawton said the municipal health department, where she works as public health division manager, has heard that many people in the city may not want to get a vaccine at a large, intimidating clinic like those at the Alaska Airlines Center or Blood Bank of Alaska. Instead, people may feel more comfortable getting a shot in places they know.

That’s why Anchorage has been helping facilitate smaller clinics at places like church gyms and community centers, as well as clinics for specific communities like a recent event for Spanish speakers in Anchorage and an ongoing clinic at the Hotel Captain Cook for people who work in the hospitality industry or near downtown.

“I think we’re finding this holds true,” Lawton said. “It doesn’t really matter what group you identify with, but people feel more comfortable accessing health care in a familiar place.”