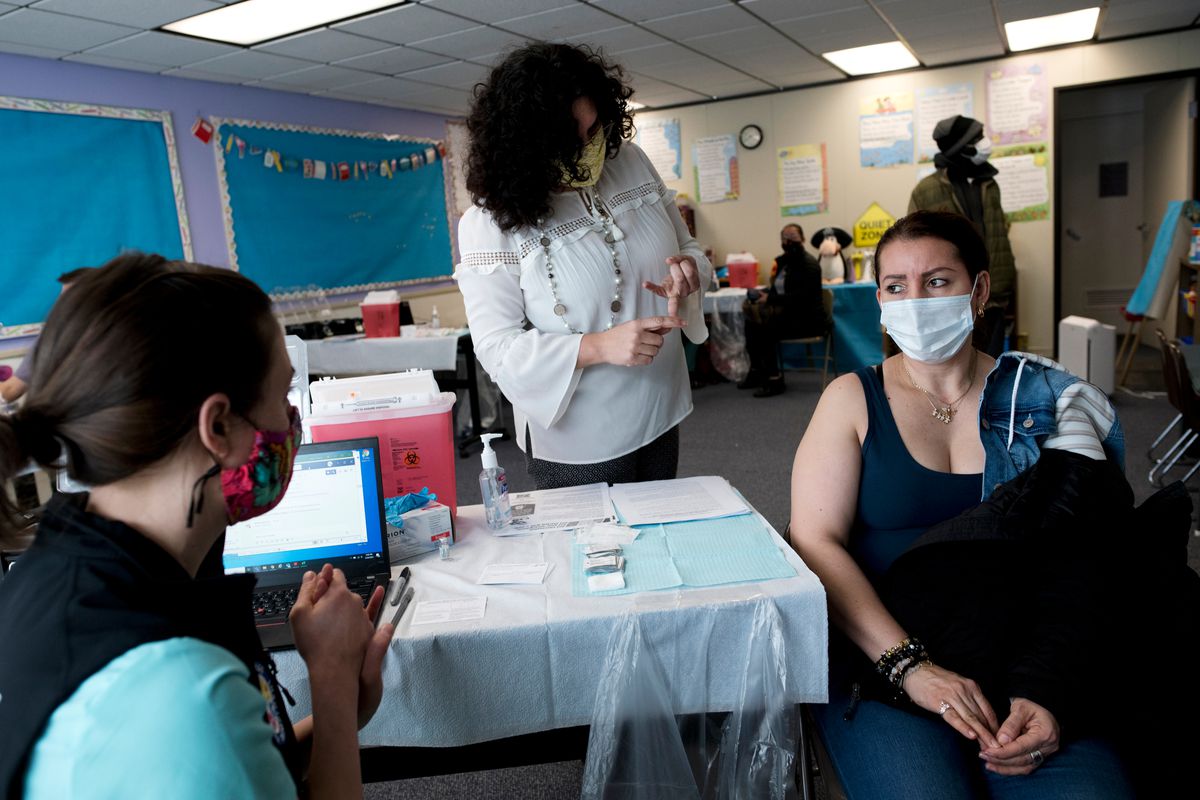 Marisol Vargas, center, talks in Spanish with Yasmin Rendon, right, as Anchorage public health nurse Molly Carver prepares to give a COVID-19 vaccination shot at a clinic hosted by the Alaska Literacy Project on March 24, 2021. Vargas is one of ALP's twenty COVID Peer Leader Navigators. Rendon is from Colombia. (Marc Lester / ADN)

Marisol Vargas, center, talks in Spanish with Yasmin Rendon, right, as Anchorage public health nurse Molly Carver prepares to give a COVID-19 vaccination shot at a clinic hosted by the Alaska Literacy Project on March 24, 2021. Vargas is one of ALP's twenty COVID Peer Leader Navigators. Rendon is from Colombia. (Marc Lester / ADN)

Two women drifted among vaccine recipients in colorful classrooms during a pop-up clinic for members of Anchorage’s immigrant communities this week.

They cheerfully greeted the visitors in their first languages, helped answer questions and eased their concerns. Zabeeba Mohamed led a woman from the observation room, chatting with her at length in Arabic. Marisol Vargas offered to take pictures, and made sure the nurse’s questions were understood by the Spanish-speaking client.

Both are Peer Leader Navigators with the Alaska Literacy Program.

Over the past year, they’ve been part of a group of 20 that has been helping the city’s newcomer population navigate the coronavirus pandemic — including helping them learn about and access the new COVID-19 vaccines.

“That has been a huge focus,” said Nyabony Gat, program director with the Alaska Literacy Program. “Making sure people have the right information to make an informed decision regarding getting the vaccine.”

Since the fall, the team has recorded nearly 1,500 hours in direct support and has helped more than 1,700 people access information, said Chelsea Ward-Waller, a spokesperson for the Anchorage Health Department, who called the navigators’ work helping people sign up for the vaccine “invaluable.”

“We also know that a language other than English was used for almost 90% of their support,” she said. “So the fact that they’re from a number of different language and cultural backgrounds, and can provide that direct support and connection to someone in their own language, is really, really incredible.”

[‘It feels good’: Almost a year into the pandemic, Alaska is vaccinating everyone]

The navigators helped clients handle doctor visits and interpret the instructions and side effects listed on the backs of prescription bottles.

Over the last year, the group shifted to pandemic assistance, said Gat. The program partnered with the city in late summer through a grant that runs at least through June 2021.

The group made videos in multiple languages about proper handwashing techniques. They helped those who had lost income apply for rental and food assistance, distributed masks and, most recently, have shifted to answering questions about the new vaccines and how to sign up for a shot.

The navigators have been trained to debunk misinformation by helping clients understand how and why the vaccine works, Gat said.

Mohamed is originally from Ethiopia and came to Alaska from Lebanon in 2008 as a refugee.

Her navigator training in recent weeks has involved meeting with doctors and asking the questions she hears most often from her clients concerning the safety and efficacy of the new vaccines.

“I asked as many questions as much I can, and then at the end, I decided for me and for my family, and for my community, to take the vaccine,” she said.

She has a video on her phone of herself recently receiving a dose, and says that video — and the fact that she herself decided to get the shot — has helped ease vaccine concerns some of her clients expressed.

Vargas, the other health navigator, said she sees her current role as helping support clients make an informed decision about whether to receive the vaccine.

“Because some people, they don’t understand how it works,” she said. Misinformation on social media is widespread, and it can contribute to fear and hesitancy, Vargas explained.

“So I say, I understand, I am afraid too,” she said. “But give me the opportunity to explain how it works. You decide. I don’t want to force you. You decide what’s best for you and for your family.”

She has also helped summarize information from the federal Centers for Disease Control and Prevention into more straightforward language.

“Sometime, the CDC language is long,” she said. “We try to make it simple.”

A clinic in a familiar place

On Wednesday afternoon, Vargas and Mohamed helped out with the pop-up vaccine clinic held in a classroom at the Alaska Literacy Program.

Word had spread quickly about the vaccine opportunity, Vargas said. There were about 75 slots, and all of them filled up quickly. There was even a waitlist. Gat said they hoped to host more pop-up clinics there in the future.

“It’s good here, because many are students here,” Vargas said, referring to the ESL classes offered there. “They know the place, so they feel confident,” she said.

Alberto Vazquez and his wife, Maria Castro, both received shots at the afternoon clinic. Castro said she was the one to convince her husband to get vaccinated, and that they also have two family members who encouraged them both to get the shot.

As Vazquez stood up to leave, Michael Fritz, a public health nurse, told him what he should expect.

“You’ll probably have a sore shoulder tomorrow,” he said. “There are some side effects, but they are typically mild, and typically get better after two days.”

Vargas translated everything the nurse said into Spanish.

She says her hope always is to help people understand the science and facts of COVID-19.

“We need to work together …” Vargas said. She explains, “Help me, and help your family, and help the war to be in peace.”