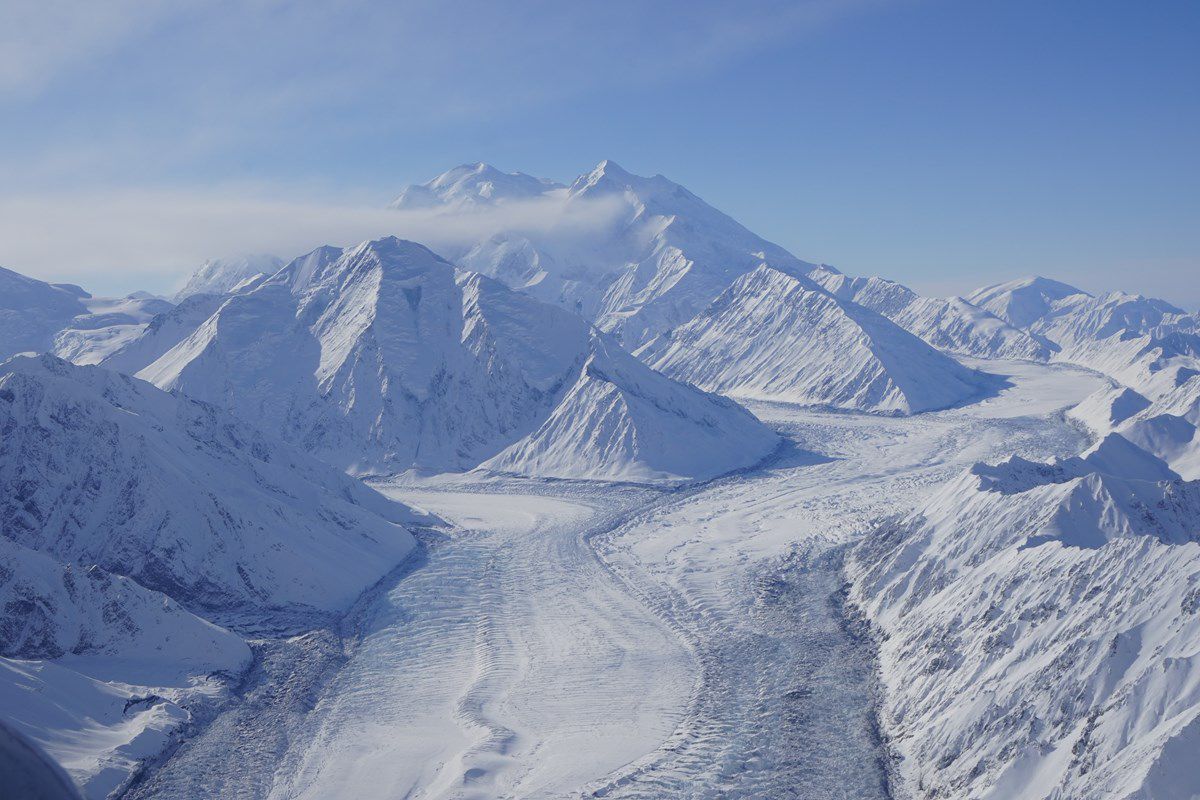 Photograph of the upper part of the Muldrow Glacier, with Denali in the background, in March 2021. Tributaries of the Muldrow Glacier, the Traleika and Brooks glaciers, are seen feeding into the main trunk in the center of the photograph. The edges of the glacier in the foreground display particularly heavy crevassing. (National Park Service photo)

Photograph of the upper part of the Muldrow Glacier, with Denali in the background, in March 2021. Tributaries of the Muldrow Glacier, the Traleika and Brooks glaciers, are seen feeding into the main trunk in the center of the photograph. The edges of the glacier in the foreground display particularly heavy crevassing. (National Park Service photo)

A Denali glacier suddenly moving at a speedier clip is intriguing scientists, increasing the risk of nearby flooding and potentially closing off some climbing routes on the mountain this season.

Muldrow Glacier — which begins on Denali’s northeastern slope and flows to form the McKinley River — is experiencing a geologic phenomenon: a surge event.

The glacier, which usually moves at an average or slow speed, is now jagged and covered with crevasses as it stretches and moves 50 to 100 times faster than normal, according to the National Park Service.

The event could impact a few mountaineers — one already canceled — who were scheduled to use the north approach to the mountain and intensifies the risk of flooding along the McKinley River, according to the park service.

The surge was first glimpsed by K2 Aviation pilot Chris Palm while he was flying last month for the Talkeetna-based company that does flightseeing tours and glacier landings.

“I was looking at the glacier and I was thinking it looks really difficult to get onto the glacier right now,” Palm said Friday. “It’s all shattered and torn up and jagged ice and deep crevasses everywhere.”

As Palm looked from farther away, he saw that a good portion of the glacier looked similarly uneven. He’d read about a surge event on the mountain some 60 years ago and thought it could be occurring again, he said.

Palm took a bunch of pictures and sent them to a geologist friend, who forwarded the photos to colleagues. Palm was correct — the glacier was surging.

Despite expectations that the glacier would surge sometime soon, it’s still exciting, said Guy Adema, physical scientist with the park service who has long studied the glacier.

The sudden surge of ice is not driven by climate change impacts. Instead, Adema said, it’s likely caused by the glacier’s elevation change and water dynamics within the glacier.

At the colder upper reaches of the glacier, there’s quite a bit of snow and ice that doesn’t move as freely as the warmer ice below it. As the ice above builds up, something triggers instability, moving the ice from upper to lower elevation in what’s known as a surge, Adema said.

Before the surge, the ice was moving between 3 and 11 inches per day. Now it’s moving 30 to 60 feet per day, according to satellite image analysis.

During the last surge event in 1956-57, the glacier moved over 4 miles in a period of months.

It’s a dynamic environment on a glacier during a surge, Adema said. One might see things tumbling, hear crackling and boulders falling. And the glacier itself is jumbled and cracked as the surface gets pulled and stretched.

Only about 1% of the world’s glaciers are considered “surge-type,” he said, though Denali has particularly high proportion of them.

During surges, water that builds up at the end of the glacier usually releases sometime in late spring or early summer. In the case of Muldrow Glacier, that water would run into the McKinley River and cause a short but significant increase in flow, Adema said.

But luckily, there are no buildings or residents directly downstream.

The first Denali climbers of this year are expected to check in April 18, and about 800 to 900 climbers total are expected, somewhat fewer than the pre-pandemic average of around 1,200, said Maureen Gualtieri, a public information officer at Denali.

Most Denali climbers use the Kahiltna Glacier route on the southern side of Denali. But every year a small number head up the north side on a route that goes up Muldrow Glacier, and the surge could make it “extremely challenging or impossible with normal equipment,” Adema said.

The surge is a dramatic and fascinating process where the earth changes a lot in a short amount of time, he said.

“It’s a spectacle of nature,” he said.

In a place like Alaska, Adema said, the glacier surge acts as a “reminder of our own humility and place within the landscape.”