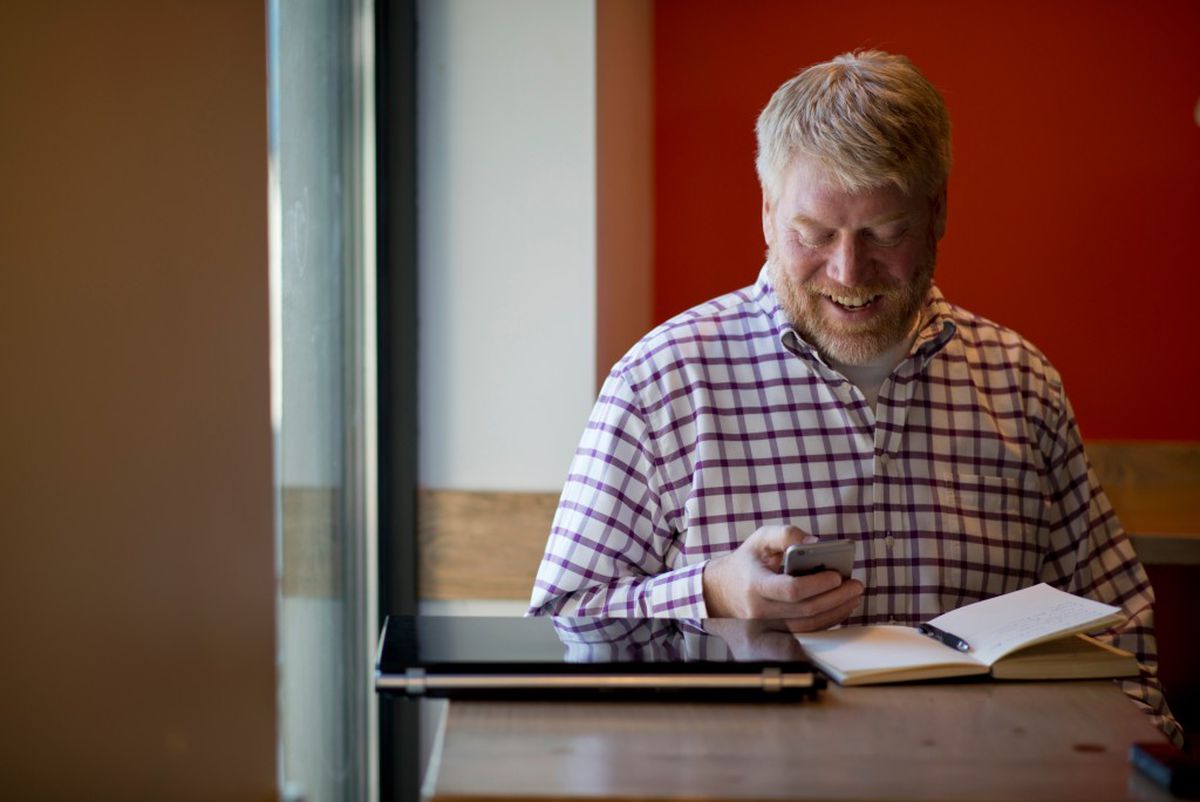 Brendan Babb is chief innovation officer for the Municipality of Anchorage. Photographed on May 31, 2016. (Marc Lester / Alaska Dispatch News)

Brendan Babb is chief innovation officer for the Municipality of Anchorage. Photographed on May 31, 2016. (Marc Lester / Alaska Dispatch News)

Brendan Babb punched a few buttons on his iPhone and the Prince song "When Doves Cry" burst onto a speaker.

"That's the library playing," Babb said. He meant Freegal, a free service that allows music streaming with a library card — and, as it turns out, is one of the few ways to stream the late Prince's music.

It's an example of "cool stuff you can do with a library card," as Babb put it — the main theme of a Friday event in downtown Anchorage called "Hacks in the Stacks," hosted by the Anchorage Library and the local civic programming organization Code for Anchorage. At a table, following Babb's instructions, patron Dave Skoglund used a smartphone to sign up his 5-year-old son for a library card after texting the word "register" to the number 888-777.

For Babb, the event merged several major passions: community and public institutions, technology and, since Babb is also a disc jockey, music.

He's about to spend even more time thinking about ways to use technology to connect people with public services. In late May, Babb became Anchorage's first-ever "chief innovation officer." He'll be in charge of examining the city's business practices and the ways Anchorage government uses data and technology to deliver services.

Friends said the job is tailor-made for Babb, a co-captain of Code for Anchorage who is constantly pondering ways to help people.

Thanks largely to Babb and his fellow Code for Anchorage volunteer programmers, city bus routes now appear on Google Maps. Anyone with a phone capable of sending simple text messages can send a text and get an automated response with bus times.

Food stamp eligibility can now be checked through a text message. Another text message service will send automatic reminders to plug in a car engine whenever the temperatures drop below 20 degrees. (For more information on the texting programs, text 'HI' to 907-312-2080 — it's available in different languages, including Yupik).

Marijuana business license filings can be found on a digital map, now used by the state of Alaska. Another map shows the location of Anchorage's parks, trailheads, ballfields and sledding hills, using data from the city parks department. For fun, Babb created a searchable database of a century's worth of Anchorage property tax records, based on the decade structures were built.

In his new city job, Babb, 48, said he has many more ideas — it's just a matter of prioritizing them.

"It's like, my dream job," Babb said. "I really am interested in technology, just helping deliver services to citizens more efficiently."

Friendly and easy-going, with distinctive reddish-white hair and a beard, Babb might be spotted carrying around an old Acer laptop computer and a black sketchbook. The sketchbook is where Babb writes down his ideas — it's easier for him to remember than if he typed them.

As well as pursuing his own ideas, Babb said a big part of his job will be soliciting and spearheading ideas pitched by other city employees. For example, the city attorney, Bill Falsey, recently contacted Babb about setting up a system to make it easier for people to retrieve impounded cars.

Last month, the Berkowitz administration announced an "open data" policy, with a goal of making structured information — like restaurant inspections — easier for the public to access.

City spokesman Myer Hutchinson said that Mayor Ethan Berkowitz, after looking at the city's budget last year, thinks there's ways to save money, particularly with the help of technology.

He said that the genesis of Babb's position was "specifically on delivering services and information to the public through technology."

"Because that's the place we see the most obvious room for improvement," Hutchinson said.

Babb noted that the city has already launched initiatives tied to improving technology and customer service, such as electronic building plan review, which is still in the works, and a page to track how people are using the city website. A Knight Foundation grant is helping the Anchorage Library set up a system to crowd-source ideas for classes and programs. Babb said he expects to have a "10,000-foot view" of those existing projects and help push them forward, and encourage the use of data to make decisions.

For example, Babb said, a program used by the city of Chicago uses data to generate a ranked list of restaurants determined to be most likely to violate health codes, based on past inspection violations. Inspectors then go to those ranked restaurants first and detect violations sooner, he said — making city operations a bit more efficient, as well as helping keep diners safe.

Babb will report to Lance Wilber, the city budget director. He will earn a $90,000 salary, plus about a $50,000 benefits package, according to the city's employee relations office. He previously worked as a senior programmer analyst and data scientist for PangoMedia, an Anchorage-based IT consulting firm.

His "chief innovation officer" position can be found in a handful of other local governments, in cities that include Austin, Texas; Nashville, Tennessee; Kansas City, Missouri; Pittsburgh, Pennsylvania; and numerous cities in California, according to a database compiled by the California-based research company Government Technology.

Anchorage has signed onto an initiative paid for by billionaire ex-New York City Mayor Michael Bloomberg and supported by the Washington, D.C.,-based Sunlight Foundation and Harvard and Johns Hopkins universities. The initiative, called What Works Cities, is aimed at helping 100 mid-sized American cities use data to improve local services. Bloomberg has pledged $42 million to the program, and 27 cities have joined so far, including Anchorage.

Babb has been a co-captain of Code for Anchorage since 2014. But he got involved with using data in a civic-minded way about five years ago, when the concept was first starting to take hold.  His connections span the United States.

Babb's interest in helping the community started young. He was born in Fairbanks and moved to Anchorage in elementary school.

He learned about community participation from his parents — his dad, Jim Babb, who just died over the weekend, worked for the Anchorage Daily News and shared a Pulitzer in 1976 for an investigation into the Teamsters union in Alaska. His mom, Bonny Lynn Babb, is a retired schoolteacher.

He went to Steller High School, an alternative school in Anchorage, and worked on political campaigns as part of a civics class assignment. He later studied mathematics and computer science at Oregon State University and interned at a tech company in California. While conducting research at University of Alaska Anchorage, Babb filed a patent related to images sent from Mars research rovers.

In high school, he worked as a disc jockey to overcome shyness at school dances. He DJ'ed at Bernie's Bungalow every weekend for a few years, but now he mostly does friends' weddings.

He also likes DJ'ing in places that people wouldn't normally expect it — a Charlie Brown Christmas Party at Westchester Lagoon, the Trailgate party on Iditarod weekend, the trail on Bike to Work Day. Were it not for the "Hacks in the Stacks" event Friday evening, Babb said he likely would have been out DJing along the trail during the Twilight 12-K race. He's more of a party DJ, he said, and tries to read the crowd.

Babb never fell into the stereotype of an isolated nerd, said Babb's longtime friend, Andrew Berkowitz (no relation to the mayor). As well as math and computers, Babb was always good at making friends and connecting with people, Berkowitz said.

"It seems like he's always thinking about ways to help people," said Nigel Kibodeaux, an Anchorage programmer and fellow member of Code for Anchorage. "Thinking of ways for people who ride the bus but maybe can't afford a smartphone to check Google — how could they get bus times?"

So much of government requires going in and doing something in person, instead of online, Andrew Berkowitz said. He said that's where government lags behind the private sector.

For his part, Babb said he wants to make government more like checking in on an Amazon order.

"The idea is, is there information that we have that we can provide to citizens in a more easily digestible way, and where they are already looking?" Babb said.

That may come in the realm of homelessness. Already, the city has been looking at ways to use technology to reduce homelessness. Earlier this year, volunteers went into homeless camps and used an app to catalog mental health histories. City homeless coordinator Nancy Burke has talked about launching an online site to make it easier to report homeless camps.

Babb had another idea, which morphed into a Code for Anchorage project: a text message system that would allow people to text and find out how many beds are available in a shelter.