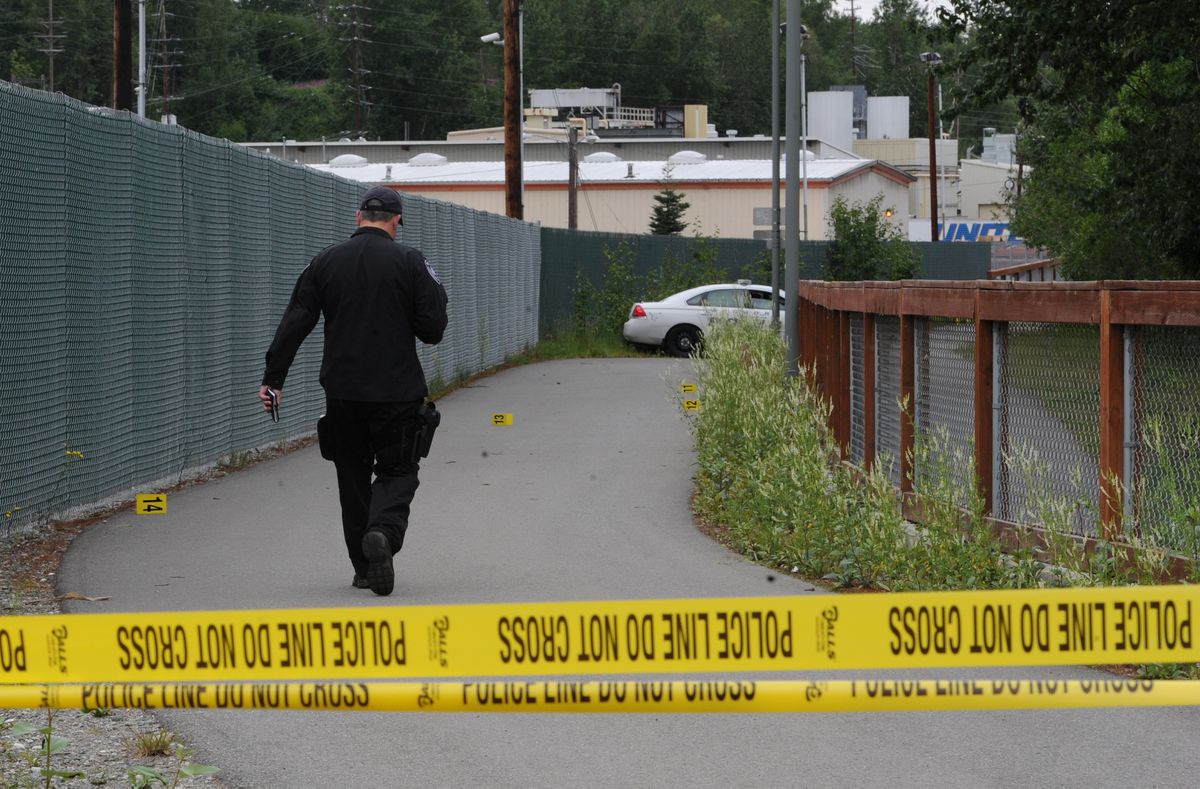 Anchorage Police investigated the deaths of a woman and a man whose bodies were found on the Ship Creek trail near Post Road on Sunday morning, July 3, 2016.. (Bill Roth / Alaska Dispatch News)

Anchorage Police investigated the deaths of a woman and a man whose bodies were found on the Ship Creek trail near Post Road on Sunday morning, July 3, 2016.. (Bill Roth / Alaska Dispatch News)

As of Sunday night, Anchorage police had not said who the people were or how they died. But the deaths were  being investigated as a crime.

"The two individuals do not appear to have died from natural causes," said Anchorage police spokeswoman Renee Oistad. "Beyond that we are still determining cause of death and how it happened."

In a brief statement Sunday morning, police said they responded at 7:42 a.m. and found the bodies along the trail just west of the intersection of Post Road and Viking Drive.

At noon, a mobile crime scene van and several police cars were parked at the intersection. Police had blocked off parts of the bike trail stretching from just east of a bike underpass at Post Road to the other side of a pedestrian bridge on the Ship Creek trail. Numbered yellow evidence markers had been placed on the trail section cordoned off by police.

Later in the afternoon, the crime scene van was still parked at the spot. Members of the police search team used metal detectors to comb a patch of woods between the trail and Ship Creek. The Anchorage Fire Department was also on scene, doing what firefighters termed a "wash-down" of  the scene.

The bike trail is a wooded greenbelt along Ship Creek in an industrial and warehouse area. It is used by cyclists, walkers and sometimes tourists who stay in the Ship Creek areas. The area has also been the site of homeless encampments.

Daniel Comes said he was walking home from a shift working at a Ship Creek area dog boarding kennel around 8:30 p.m. when he noticed police cars massed at the intersection of Viking Drive and Post Road. Inside crime scene tape, he saw a pair of flimsy black flip-flop shoes abandoned on the trail, he said.

By the time he walked by again in the early afternoon, the shoes had been removed.