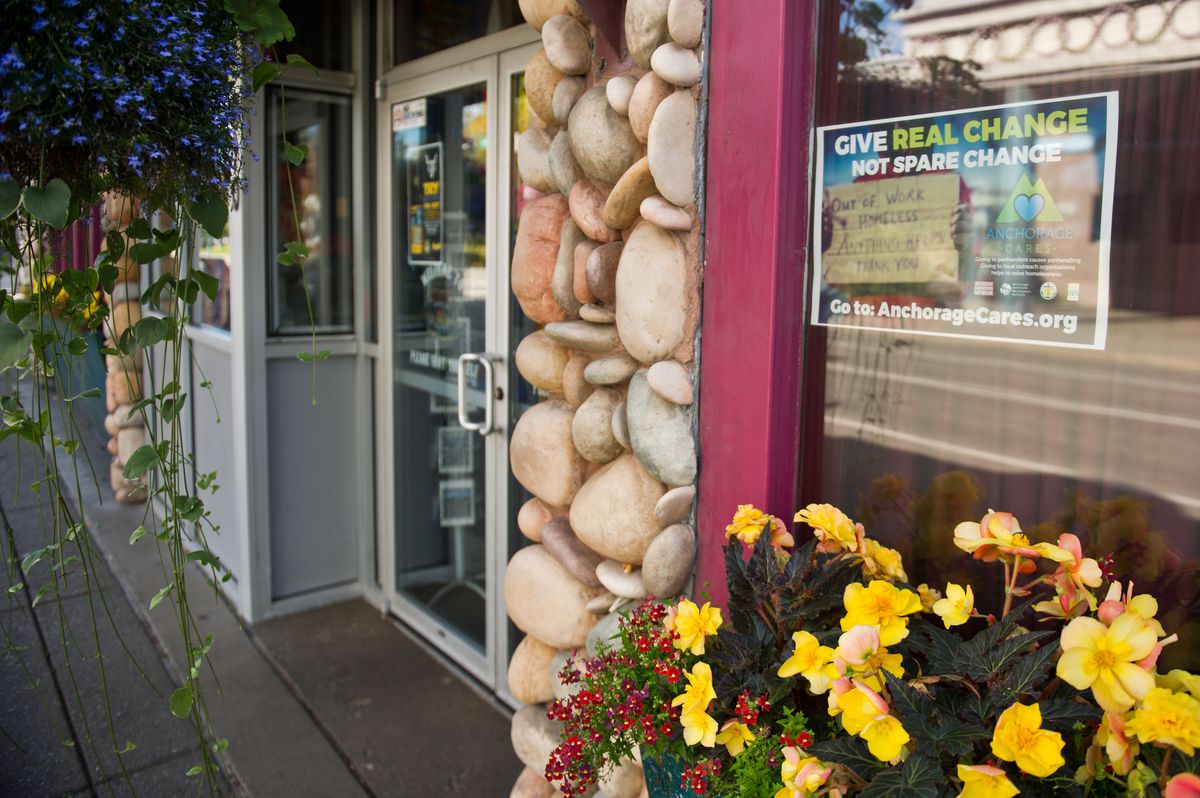 Anchorage officials and business organizations have revived a dormant campaign to discourage Anchorage residents and tourists from giving money to panhandlers and instead donate directly to charities that work on homelessness and substance abuse.

Signs popped up earlier this week in the windows of several downtown businesses, including Humpy's Alehouse and Flattop Pizza.

"Give real change, not spare change," the signs read, next to a picture of a panhandler holding a cardboard sign.

The campaign, "Anchorage Cares," is being spearheaded by the Anchorage Economic Development Corp., a private nonprofit that focuses on economic development and quality-of-life issues in the city. So far, it's being funded by the office of Anchorage Mayor Ethan Berkowitz and the Anchorage Downtown Partnership.

A new website associated with the campaign, AnchorageCares.org, links to the donation pages for seven Anchorage-based social services organizations. It also describes the dangers of drawing panhandlers into traffic.

The effort comes as an Anchorage nonprofit agency, Alaska Worksource, is testing out a city-funded work-van program that picks up panhandlers for day-labor jobs.

In tandem with the work-van program, coordinators hoped the new campaign will go beyond just putting up signs and a website, said Moira Sullivan, the director of AEDC's "Live. Work. Play" initiative.

"I think the coordination with the work van is really critical," Sullivan said in an interview. "Coming at this from two sides is really different from telling people to stop giving money and not have anything to show for it."

Formal campaigns to encourage Anchorage residents to donate money to charities instead of panhandlers stretch back at least a dozen years.

In 2004 and again in 2011, the Anchorage Downtown Partnership led a campaign called "Change for the Better." A series of posters rolled out. The downtown business organization also distributed pocket cards to businesses and public areas that described ways to act if approached by a panhandler besides handing over money.

Trevor Storrs, former chair of the board of the Anchorage Coalition to End Homelessness, said the "Change for the Better" campaign was hampered by limited funding.

More recently, in December 2014, former Mayor Dan Sullivan recorded a public service announcement where he held a sign that said, "Panhandling is dangerous." He encouraged people to donate to local charities instead of giving money to panhandlers, which he said spurred alcoholism.

For the "Anchorage Cares" campaign, AEDC and city officials were unable to cite studies or data to show how many people in Anchorage panhandle, how much cash they collect and where that money is spent.

But frustration among local business owners hasn't abated. About six months ago, a committee of AEDC's "Live. Work. Play" initiative started talking about ways to discourage panhandling, said Sullivan, who is the former mayor's niece.

So far, the organization has spent $7,000 to build a new campaign website and print the posters. The mayor's office kicked in $2,000, said city spokesperson Myer Hutchinson.

"It's a first step in a series of things" tied to the city's efforts to fund agencies working on reducing homelessness, Hutchinson said.

The van has ferried crews in orange vests to cleanup sites, including a bus stop by the Walgreens pharmacy near Minnesota Drive and a stretch of the Seward Highway, said city homeless coordinator Nancy Burke.

Program participants will be paid $10 an hour, part of the grant funding from the city.

For part of the week, participants spend time at the Alaska Worksource office in Mountain View to receive counseling, Burke said.

Early Friday afternoon, a man who gave his name as Daniel George stood on the corner of C Street and Benson Boulevard.

He held a cardboard sign that read: "Help a veteran," with the phrases "God bless," "Semper fi," "Spare change" and "Hot meal" underneath.

George was missing the fourth finger on his right hand. He said he was injured while serving in the military.

Some days he gets $30 or more panhandling, he said. Some days he's only given food.

One woman walked up to him and handed him a McDonald's bag with an Egg McMuffin inside.

Between his injured hand and a record of criminal convictions for assault, it's difficult to get a job, George said. That's why he stands on the street corners.

He said he doesn't spend money on alcohol or drugs, but he believes most Anchorage panhandlers do.

At a public safety meeting hosted by Berkowitz in Valley of the Moon Park on Thursday, one man, George Shoogukuwruk, said he was once homeless and spoke passionately against giving money to panhandlers. He said giving money enables alcoholism.

"It's not their fault, it's our fault," Shoogukuwruk said.