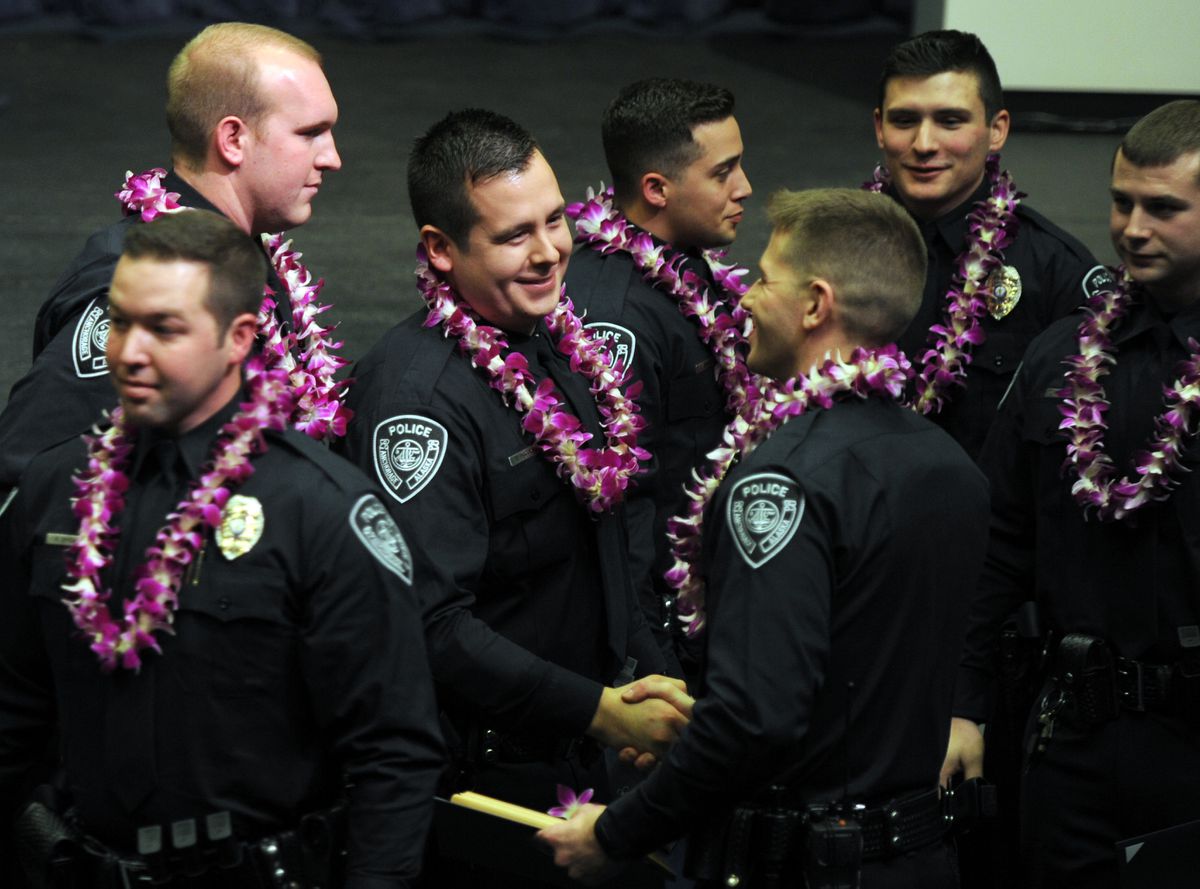 In a ceremony Thursday, the Anchorage Police Department pinned badges on 26 new cops — including a father and his son.

The father, Richard Jude Macias, 45, worked for the Tucson Police Department for more than two decades. He started taking his son, Richard James Macias, on ride-alongs when Macias Jr. was 16.

From high school, Macias Jr. joined the U.S. Air Force and was stationed at Joint Base Elmendorf-Richardson. He's spent the past six years defusing dangerous devices for the military.

Now 26, Macias Jr. wanted to remain in Anchorage when he left the service and decided to join the Anchorage Police Department. Macias Sr., meanwhile, was ready to retire from the Tucson department.

But he wasn't finished being a police officer, he said. So he signed up to join APD, too.

[A former prosecutor recalls a benediction as she prepares to talk to recruits.]

They carpooled to the police academy and razzed each other. At the end of the day, they asked each other questions, Macias Sr. said. They kept close in the rankings, officials said, though Macias Sr. emerged as the valedictorian of the class.

The Maciases are two of the 26 officers who graduated Thursday from the academy. They join a department that has grown to 360 officers from the 319 at the start of last year.

Another academy starts in a few weeks, which will bring the count of sworn officers to 417. Officers train for months, so the public may not notice a difference until next fall, said APD spokesperson Jennifer Castro.

The December academy will be the fourth since Mayor Ethan Berkowitz took office. He campaigned on public safety and promised to boost the department to 400 officers.

Speaking to the new officers Thursday at the Wendy Williamson Auditorium at the University of Alaska Anchorage, Berkowitz noted that he was trying to boost staffing. But, he added: "I'm mindful that the department isn't made up of numbers, it's made up of individuals."

The officers graduating Thursday come from a variety of backgrounds. About half were from Alaska.

One was working as operations manager at an outdoors store in Anchorage. Another worked for the U.S. Department of Agriculture's Wildlife Service and was in charge of keeping birds and animals off the runway at Ted Stevens Anchorage International Airport. There's a former school bus driver. One of the new officers previously worked as a cop in Puerto Rico.

Just one woman was among the graduates, and the academy leaned white. Earlier this year, 82 percent of APD was white, while census data show whites make up 66 percent of Anchorage's overall population.

Police officials said they are trying to promote diversity in the department. Before Thursday's ceremony, APD Chief Chris Tolley said his goal has been to talk to as many people in Anchorage as possible about joining. He and other department officials have increased presentations and attendance at community events, Tolley said.

If someone drops out of an academy, Tolley said, the department has been trying to do more to figure out why. But he said he thinks the department is making strides toward inclusiveness.

Capt. Justin Doll, head of the crime suppression unit and a former recruiting official, said the department was limited in its diversity by those who apply to the academy.

"When you compare the community's demographic data to the department … you see it is a little out of balance," Doll said. "We encourage (changing) that, but I don't think we can directly control it."

He noted Thursday's academy included a few midcareer professionals, not just young people coming out of college or the military.

"To see people transitioning from other professions … to me that's a really good sign," Doll said.

This story was updated to correct the position held by Capt. Justin Doll. He is the head of the crime suppression unit, not the patrol unit.