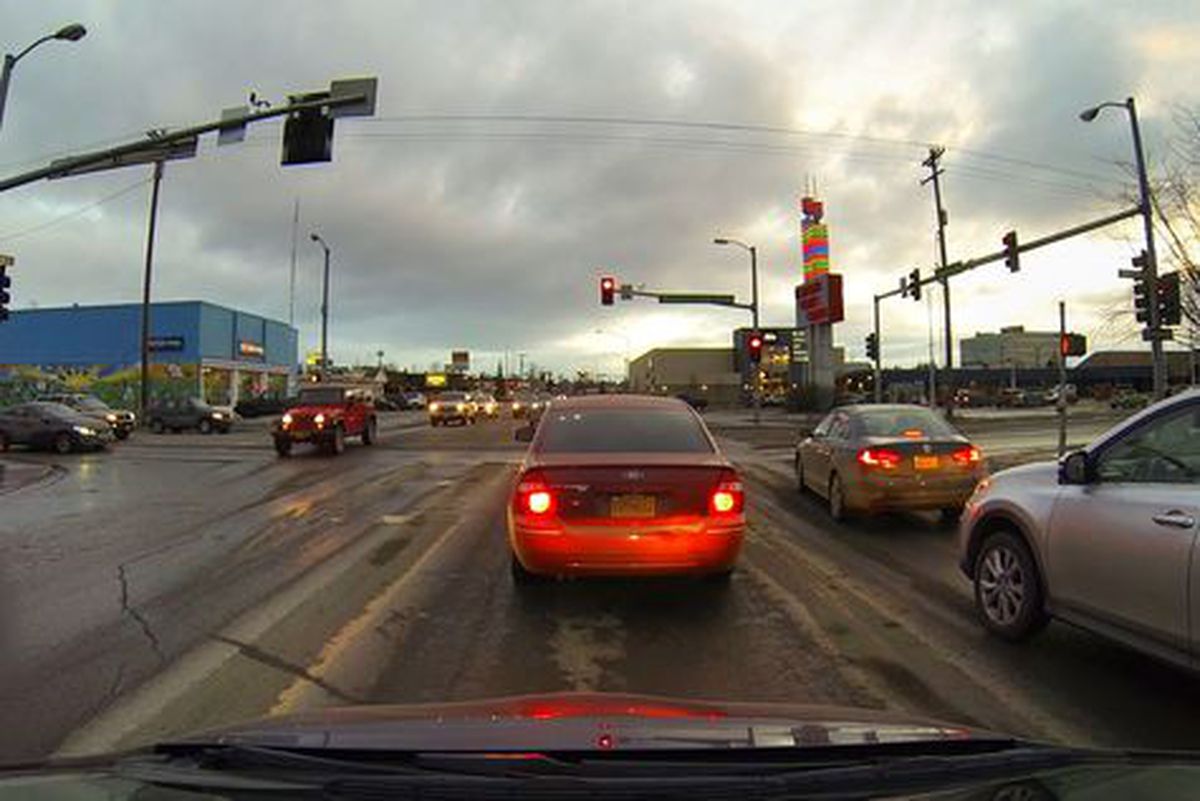 Anchorage Assembly member Dick Traini said the city should go back to using cameras to catch traffic violators, only he wants to ticket drivers who run red lights, not speeders as the city tried to do with "photo radar" in 1996.

Traini said he's hoping to introduce an ordinance to the Assembly later this month. If the Assembly gives it the go-ahead, a measure authorizing automatic red-light cameras would appear on the April city ballot, he said.

"We get numerous complaints of red-light runners," Traini said, framing it as a public safety problem. He said the Anchorage Police Department can't watch every intersection.

Since 1997, Anchorage's city charter has allowed only sworn police officers to write traffic tickets. That provision came in the wake of a voter initiative and huge political backlash over a program to use photo radar to write speeding tickets.

Red-light tickets have comprised about 5 percent of all traffic tickets written by APD this year, according to LeBlanc. Through the end of November, officers had written about 22,800 tickets; 1,292 were for red-light violations.

Traffic law says a person can be cited for running a red light after entering a crosswalk or an intersection once the light turns red, LeBlanc said.

But that also means some people speed up, instead of slowing down, to get into the intersection before it turns from yellow to red, he said.

The state Highway Safety Office is in the middle of studying the extent of the problem, LeBlanc said.

Closed-circuit cameras at Boniface Parkway and Mountain View Drive are serving as the basis for the study, according to the state website. LeBlanc said he expects the results of the study sometime next year.

The photo-radar program was initially sponsored in the mid-1990s by then-Assembly member Mark Begich as a way to enforce speeding restrictions in school zones.

Cameras were mounted on white photo-radar vehicles. A private contractor managed the program and kept 70 percent of the revenue from citations.

The program operated for a year. It fell apart after critics raised concerns over privacy and accuracy, and the courts dismissed thousands of contested citations. Then-Mayor Rick Mystrom and the Assembly, including Begich, moved to dismantle it.

LeBlanc, who was a patrol officer at the time, said he also recalled ire over the amount of citation revenue the private company took. He said he's not a fan of what he called "commercial, for-profit law enforcement."

If the city moved toward a red-light camera program, there must be police oversight of automated citations, he said.

But LeBlanc said there are benefits to red-light cameras. They helps if drivers and pedestrians feel like a cop is always watching.

"It's a method to gain compliance," LeBlanc said.

LeBlanc noted many Anchorage intersections are already equipped with cameras to monitor traffic flow. Although they haven't been used routinely to issue citations, the camera footage has served as evidence in serious injury crashes, he said.

Traini was on the Assembly during the debate over the photo radar. He blamed the expansion of the program beyond school hours as a reason it failed.

He also said the public has become more accepting of electronics since the late 1990s.

"A lot of people are asking us, 'What can you do about red-light runners?'" Traini said. "This is the only real thing we can do."

In an email Wednesday, city attorney Bill Falsey confirmed Traini had asked him to write an ordinance that would "potentially result in a ballot proposition in April."

Many major cities have also banned the cameras, or ended such programs, like Anaheim, California and Los Angeles.

If he can file his measure in time to make the ballot, Traini acknowledged his first challenge would be getting Assembly approval. Then it would be up to the voters, he said.