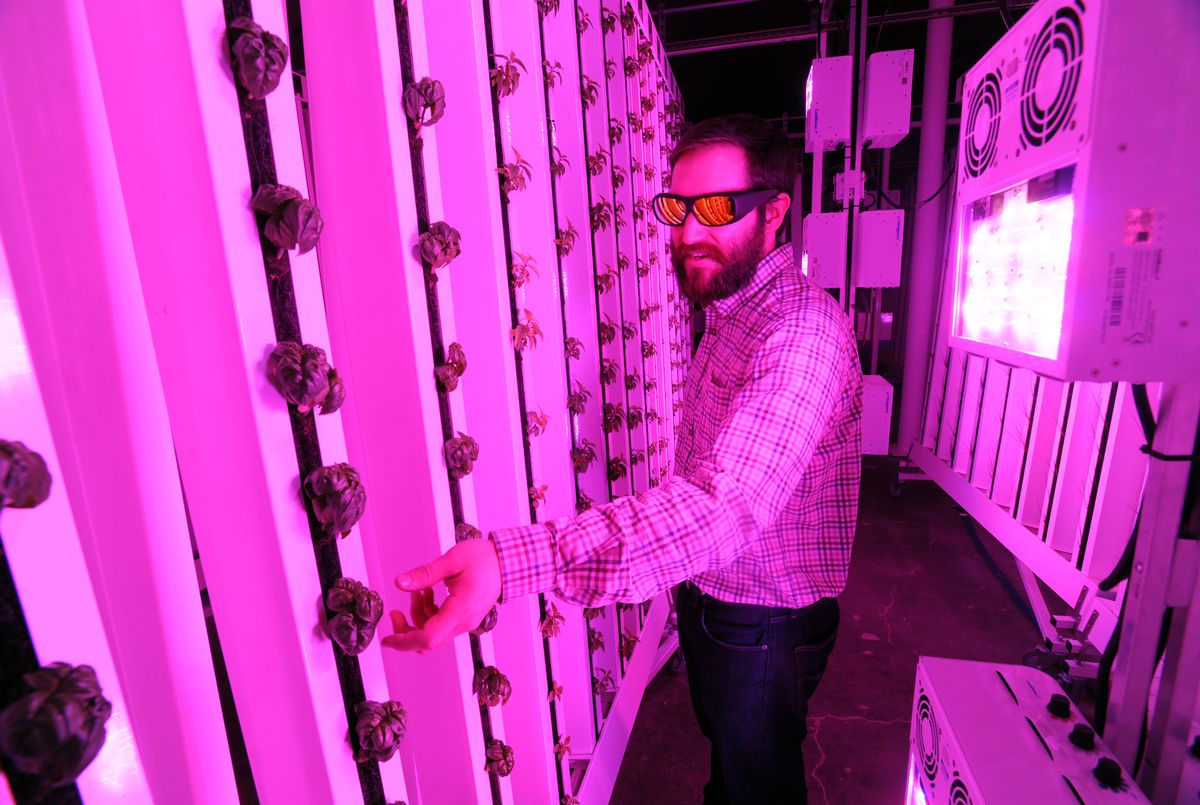 To help disadvantaged teens and young adults land jobs, an Anchorage mental health provider is staking out ground in the high-tech farming fields of hydroponics and vertical gardening.

"Each of these towers, you can see up here, has nutrient solution," Sobocinski said, surrounded by the drip-drip-drip sound of small hoses. He showed how water nourishes the roots, collects in a gutter and then recirculates back to a nutrient tank that feeds back into the hydroponic system.

The columns are yielding pounds of fresh veggies. The twist: The gardeners will be largely young adults coming out of foster care, mental health treatment, the juvenile justice system or even homelessness. Sobocinski and his team hope the inside garden will be a turning point for youth at risk of falling through the cracks.

Seeds of Change, as the program is called, has been incubating for years, but it's now on the cusp of becoming reality. Anchorage Community Mental Health Services, a well-established nonprofit that offers a wide range of services to adults and children, is managing the project.

The idea came from Sobocinski, who previously worked at residential children's psychiatric treatment centers in Denver. In that job, Sobocinski saw a lot of kids who grew up hungry. Some of his clients were fishing food out of dumpsters to help feed their siblings.

A horticultural therapist also showed him that young people tend to respond well to working with plants, he said.

In 2014, after years of research and planning, Anchorage Community Mental Health Services bought the building at 26th Avenue and Arctic Boulevard. At least from the outside, it's nondescript — a kitchen cabinet manufacturing company used to be housed there.

Renovating the 11,000-square-foot building to suit an indoor farming operation cost about $3 million. The construction money came from a grant through the state Department of Health and Social Services. More than $100,000 came from the Alaska Mental Health Trust Authority for planning, development and startup staffing costs.

Once fully up and running, Seeds of Change should yield 50 to 70 tons of produce a year, Sobocinski said.

To staff it, Anchorage Community Mental Health Services plans to hire up to 20 people between the ages of 16 and 24. The wages will likely range between $12 and $13 an hour for 10 to 15 hours of work a week, Sobocinski said.

Priority will go to teens and young adults aging out of Alaska's foster care, juvenile justice or mental health treatment systems. Too many kids are coming out of tough circumstances and getting lost in young adulthood, Sobocinski said.

"When you turn 18, by and large, the system of care says, 'Congratulations, you're an adult,' " Sobocinski said. "And so programs and eligibility that work when you were 17 may not necessarily work when you're 18."

All the workers will have access to mental health services through Anchorage Community Mental Health, though they don't have to be clients, Sobocinski said.

As well as working in the greenhouse, the hired youths are expected to attend classes on life skills, like getting an apartment, interviewing for jobs and maintaining good credit.

The positions will last between six and nine months. Finding the workers full-time jobs from there is key, Sobocinski said.

At the same time, finding work for about 20 teens is a "drop in the bucket," said clinical program manager Seina Johndro, who will be running the life-skills component of the greenhouse program.

"There's a huge need for programs like this in town," Johndro said.

Seeds of Change doesn't include apartments or places for young workers to live. But housing is a critical piece, Sobocinski said. He said the organization is still exploring ways to connect participants with housing.

In recent years, Anchorage social service agencies have made forays into food to help clients. The Downtown Soup Kitchen started a bakery and garden to offer work to the women who stay there, as well as a culinary arts program.

But vertical gardening is a novel approach even for the state's farming community. At first, the idea was a more traditional greenhouse, Sobocinski said. But when that plan fell through, Sobocinski and other officials turned to hydroponic growing.

"It's going to give us very big yields, and it's a good use of space," Sobocinski said.

With the help of the Foraker Group, which advises nonprofits, Anchorage Community Mental Health Services also gauged whether there would be demand for the produce.

One fact they learned: Alaska imports 90 to 95 percent of its food.

No marketing contracts have been signed yet. But Sobocinski said his organization is talking to a local restaurant owner as well as grocery chains about buying produce. He thinks businesses may be interested in having a "Seeds of Alaska" stamp on a menu.

Sobocinski said he's confident the operation will be able to support itself by the end of the year and make enough to reinvest in new programs.

For the teens and young adults slated to work in the garden, there's a lot of hands-on work to do, said Ryan Witten, the greenhouse manager. The workers are also expected to learn how to market and sell the produce.

At the moment, the only young people working in the greenhouse were employees of Alaska Youth Advocates, a supportive program for at-risk youth that is part of Anchorage Community Mental Health Services. The program recently moved to the greenhouse building after its floor in the Anchorage transit center closed.

Quavon Bracken, 19, has been an outreach worker with Alaska Youth Advocates for about three years. He had friends in "really bad living situations," he said, but until he got the job, he didn't know how to help them.

Standing in the greenhouse, Bracken, who's headed to University of Alaska Anchorage as a business administration student this spring, said he's looking forward to learning more about marketing. He also helped set up the greenhouse and expected to be part of the hiring team for the teens who will work there.

By early February, the first harvest was on its way. Greenhouse managers were preparing to pick dill and chervil.