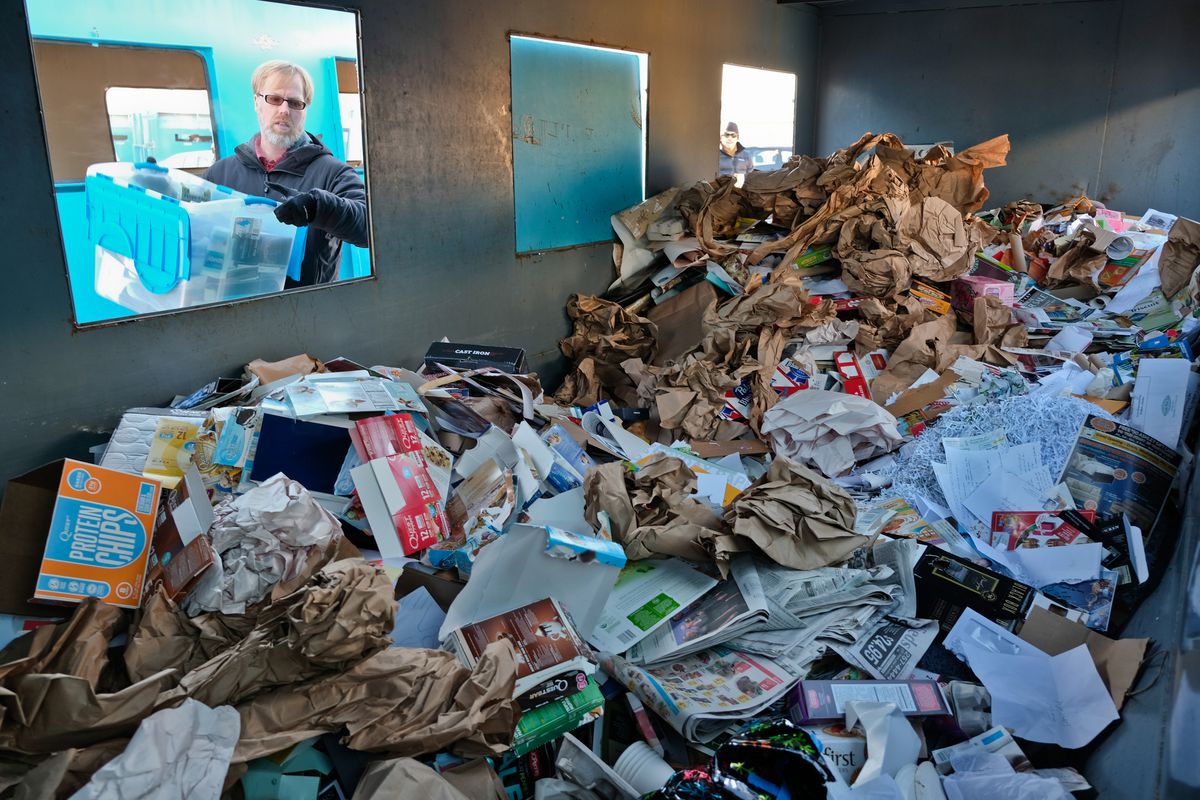 Gregg Schomaker empties a container into one of the mixed paper bins at the WestRock Anchorage Recycling Center on Rosewood Street on February 6, 2017. Customers using drop-off centers may be one reason they don’t use curbside recycling, according to Alaskans for Litter Prevention and Recycling. (Marc Lester / Alaska Dispatch News)

Gregg Schomaker empties a container into one of the mixed paper bins at the WestRock Anchorage Recycling Center on Rosewood Street on February 6, 2017. Customers using drop-off centers may be one reason they don’t use curbside recycling, according to Alaskans for Litter Prevention and Recycling. (Marc Lester / Alaska Dispatch News)

Fewer than a quarter of all Alaska Waste customers in the municipality of Anchorage sign up for curbside recycling. Now the company wants to know why.

Last week, the utility started a pilot program targeting users who have curbside garbage pickup but not recycling. They'll offer free curbside recycling to the group for three months to see whether it encourages more people to enroll.

The company will also conduct interviews to get a better understanding of why people aren't participating in the program, according to Craig Gales, sales manager for Alaska Waste.

[After 4 years, Anchorage is still working to make glass recycling worth the effort]

The company serves 45,000 people in the municipality and is the largest waste pickup service in the area. Gales said when the curbside program was initially implemented six years ago, the utility would sign up 50 to 100 people a week. He said now it's down to one or two.

Gales said about 20 percent of all Alaska Waste customers in Anchorage and Eagle River participate in curbside recycling.

"You would think everybody would want to recycle, but it's not necessarily the case," he said. "And that's one of the things the pilot program is going to do. It's going to give us the opportunity to get feedback."

Alaska Waste is one of two garbage utilities in Anchorage. Solid Waste Services, the municipal entity in charge of garbage pickup in some parts of the city, automatically includes recycling with regular trash pickup.

Alaska Waste does not. Instead, users in Anchorage and Eagle River can opt in to the program for an additional $14 a month.

Residential recycling in Anchorage has remained fairly flat in recent years according to municipal recycling coordinator Travis Smith. About 5,965 tons were recycled through curbside pickup in Anchorage last year, up only 239 tons from the previous year.

Mary Fisher, director of Alaskans for Litter Prevention and Recycling, wasn't surprised to hear that only 20 percent of Alaska Waste customers participate in the program. She said that's better than it's been in recent decades.

Fisher said some people already have a routine of dropping off their recycling at set collection points. Others don't feel like they produce enough waste to justify adding a curbside bin. Some simply don't want to pay an additional fee.

"Whenever you have curbside service where both the garbage and the curbside are line items on your bill, there is not the incentive that there is as the rates are set up in the Solid Waste Services area," she said.

Gales said the additional cost can usually be offset by households who end up buying a smaller trash container. The smaller trash cans are cheaper and can offset the cost difference of adding on a recycling container.

But the company wants to see how people react once they actually have the recycling containers.

"The other thing is that, in my experience, if you can get the containers into people's hands, and give them an opportunity to try it, they really do really better understand it," Gales said.