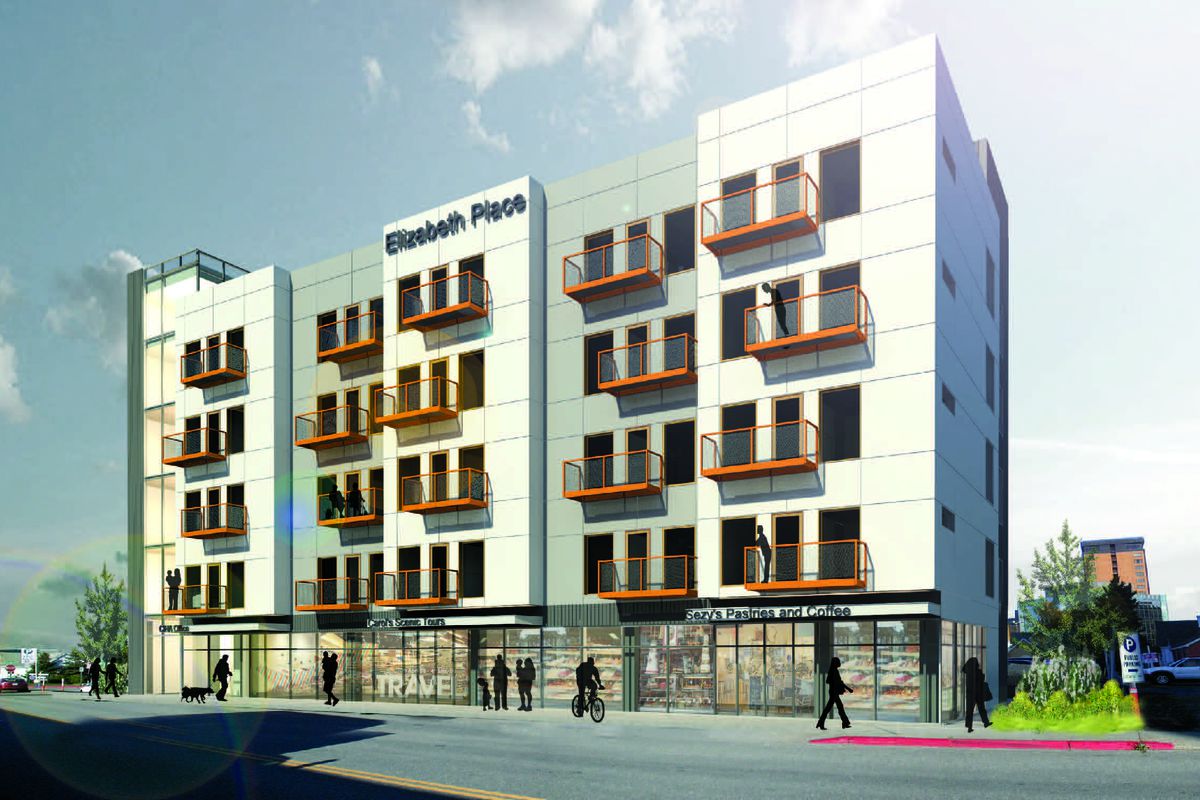 The parking lot at West Seventh Avenue and I Street is on track to becoming a 40-unit, mixed cost apartment building. (Courtesy Cook Inlet Housing Authority)

The parking lot at West Seventh Avenue and I Street is on track to becoming a 40-unit, mixed cost apartment building. (Courtesy Cook Inlet Housing Authority)

A half-acre parking lot in the heart of downtown Anchorage is on track to be transformed into a trendy apartment building with street-level stores and a rooftop patio.

Officials describe the project, the first new apartments for the city's core in more than a decade, as a breakthrough for downtown.

Cook Inlet Housing Authority, an Anchorage-based nonprofit housing developer, won a competitive city bid last fall with its proposal for a five-story building that will include 40 one-bedroom apartment units, priced at both market and subsidized rates. The building is proposed for three city-owned parcels on the north side of Seventh Avenue between I and K streets.

"It's been a long time since there was new residential construction in downtown proper," said Chris Schutte, the city's development director.

For years, the parcels at Seventh Avenue and I Street were tied up in federal restrictions. The federal government gave the parcels to the city decades ago but restricted them to municipal purposes.

That changed in 2014, when a federal defense spending bill lifted the restrictions on five parcels in downtown Anchorage, including the three at Seventh Avenue and I Street.

In a news briefing at the existing parking lot, then-Mayor Dan Sullivan called the land "prime downtown lots." He said the city wanted to find buyers that would do actual development, rather than hold it for speculation purposes.

Usually, developers come to the city asking about properties. In this case, the city tried the opposite approach — asking developers to submit proposals for the land, said city real estate director Robin Ward.

In the bidding process, the city encouraged creative ideas to stimulate a part of downtown that many saw as underutilized. The bid generated a lot of interest, Ward said.

Three developers sent proposals. After a review, which included in-person interviews with city officials, Cook Inlet Housing Authority won the bid. Schutte said the city was particularly impressed by the developer's background and qualifications — Cook Inlet Housing is known for embarking on ambitious mixed-income and mixed-use projects, including in Mountain View, Muldoon, Eagle River and Spenard.

Many details are still being worked out and some will require Anchorage Assembly approval. The city and Cook Inlet Housing officials are negotiating whether the deal will involve a lease or sale of the ground, Ward said.

But Ward said the city is determined to see the project through.

"We are going to go forward with this. We're very excited about it," Ward said. "We wanted mixed use downtown."

A spokeswoman for Cook Inlet Housing, Sezy Gerow-Hanson, described general details about the project in a Friday interview. She said the nonprofit was still working on the financing of the proposal and its budget.

But Gerow-Hanson said the nonprofit had decided to name the building "Elizabeth Place" after the Tlingit civil rights activist Elizabeth Peratrovich.

A rooftop deck will feature views of Cook Inlet, Gerow-Hanson said. On the street floor, the developer plans to offer tenant storage and 2,600 square feet of commercial retail space. The nearby Marriott Hotel could be a big draw for local retailers, she said. Gerow-Hanson said the project is also expected to incorporate alternative energy systems.

Because of the pricing of the 40 apartment units, people of varying incomes will be able to live there, Gerow-Hanson said.

"A lot of jobs downtown are hotel, restaurant, support for law offices … jobs that aren't super high-paying," Gerow-Hanson said. "This allows you to maybe live closer to where you work."

A 2014 employee survey of city residents circulated by the Anchorage Economic Development Corp. found that nearly half of the 600 respondents said they wanted to live close to downtown.

The city currently leases the parking lot to the Anchorage Community Development Authority, the public redevelopment agency that manages parking downtown. Gerow-Hanson said parking for tenants is planned for the back of the new building.