Anchorage’s port is already falling apart. With the clock ticking, who will pay to fix it? 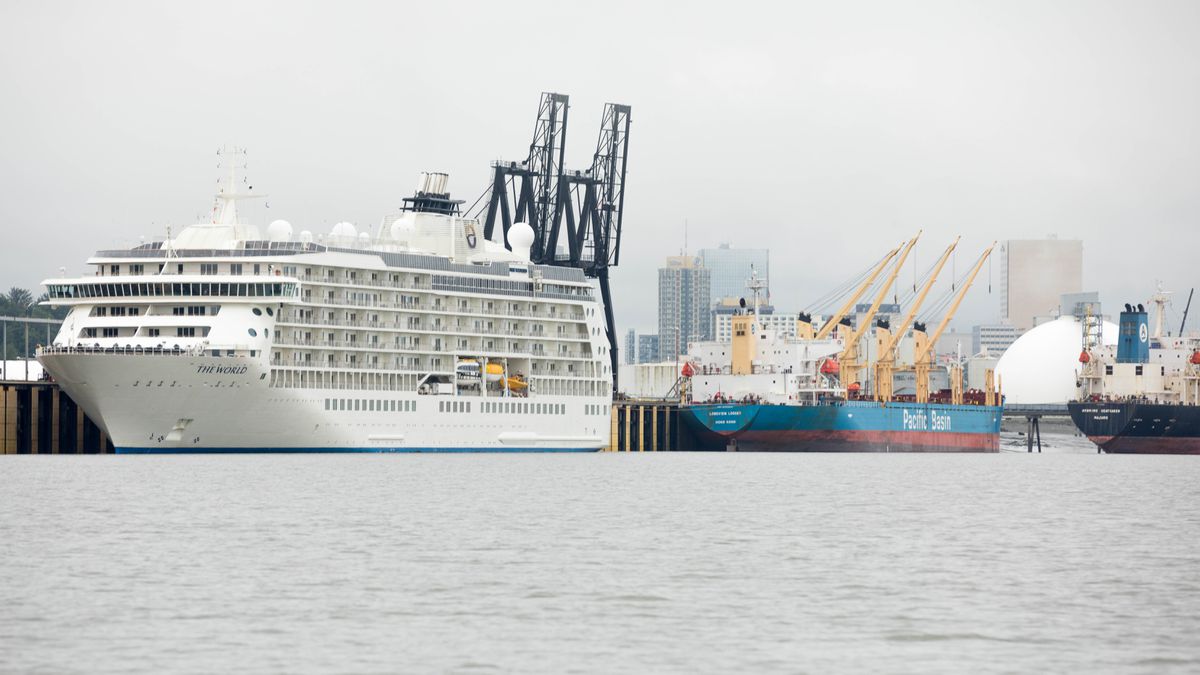 The World, a high-end residential cruise ship, is docked at the Port of Anchorage with a cement ship, center, and a fuel tanker, right, on Aug. 3.  (Loren Holmes / Alaska Dispatch News)

The World, a high-end residential cruise ship, is docked at the Port of Anchorage with a cement ship, center, and a fuel tanker, right, on Aug. 3.  (Loren Holmes / Alaska Dispatch News)

In about 10 years, the docks at the Port of Anchorage will start closing, crippled by corrosion, unless major repairs are made.

But with the clock ticking, it's still unclear who will pay for it, and how.

Without a big injection of state or federal funding, officials say the port, which opened in 1961, is more likely to resort to a tariff that leads to higher prices on the vast majority of consumer products that come into the state. That means everyone would pay a little more for a gallon of milk, a loaf of bread, a car or a sheet of plywood.

A scary incident at the port earlier this summer accentuated warnings about its condition.

At 7 a.m. June 26, the Holland America cruise ship MS Amsterdam docked at the port. Waves kicked up by the ship while it was docking broke the severely corroded underwater base of two columns holding up the port — causing a 57,000-pound dock fender to break off and sink into the adjacent berth.

The fender narrowly missed the cruise ship. There was no damage or injuries reported. But the incident prompted an Alaska maritime organization to send a worried letter to Mayor Ethan Berkowitz and Anchorage Assembly members.

[Port of Anchorage: A billion-dollar mess?]

In a July 17 letter, Michael O'Hara, president of the Southwest Alaska Pilots Association, which provides pilot services to vessels in Southcentral Alaska, pointed to the cruise ship incident as evidence of "the level of infrastructure failures which must be addressed."

"Other frequent caller ships have noted that these pilings are collapsing or are vulnerable to collapse even without direct interaction but simply from the wash caused by the propulsion systems required to safely dock a vessel," O'Hara wrote.

A failed expansion project abandoned by the city in 2010 gobbled up tens of millions of dollars in taxpayer money. Yet the structural problems at the port remain.

The Municipality of Anchorage spends several million dollars a year reinforcing the corroding wharf piles, but that's not a permanent solution, officials warn.

The vast majority of the state's dry goods come through the port, and its poor condition makes Alaska more vulnerable in the event of a major earthquake. Port officials say that even without seismic activity, the docks only have about 10 years left.

[With easy money gone and port dock failing, Anchorage will have to pay]

"The dock clock is ticking," a recent handout reads. The handout, which describes the cruise ship incident, is titled "Beginning of the End."

In lobbying the state in recent years, Berkowitz and port officials have been trying to make the case that the port is critical to the entire state, not just Anchorage.

But Berkowitz and Port Director Steve Ribuffo now acknowledge it's unlikely the state, facing a huge fiscal crisis, will foot the bill. It's also unclear what federal funding will be available.

Revenue bonds, private investment and money from settlements in a lawsuit over the previous botched project appear to be among the leading options moving forward.

Berkowitz said the state should help pay for the port when "it gets its fiscal house in order." But until then, Berkowitz and his deputies are lining up other options.

"Clearly we are in discussion mode," Berkowitz said in a phone interview earlier this month.

Berkowitz wouldn't put hard deadlines on decision-making. But the city has adopted a "modernization" plan to replace the docks while keeping the port open. The project is scheduled to take at least seven years.

The city has enough money to finish the first phase of the project, which includes construction of a new petroleum and cement terminal.

Officials are working on the design and permitting related to future phases, which include the critical replacement of the docks.

"There's a modernization plan in effect. That plan has a schedule. And we are sticking to that schedule," Berkowitz said.

Get a lot of money from litigation.

The city netted about $19 million from private contractors after the botched expansion project. But officials are optimistic that millions more could be won in a lawsuit against the federal Maritime Administration, or MARAD. The lawsuit is set to go to trial in a year.

Berkowitz noted that private ownership has become a part of ports around the world.

"You might sell or have long-term leases for port assets that infuse capital at a needed time," Berkowitz said.

He wouldn't identify the private investors who have approached the port, only that a "steady stream" of investors have come forward since he's been in office.

"Let me just say there are those who represent sovereign wealth funds, who represent private equity, who have given us vague expressions of interest," Berkowitz said. "And if we were to tune up what we were asking for, those offers, I'm sure, would happen fairly quickly."

Foreign involvement is unlikely as far as port investment, given the strategic importance of the port to the military. But a "strong proven ally" could make a successful pitch, Berkowitz said.

The private companies that use the port could also be among the investors, Berkowitz said.

A bond issued through the municipality would have to be paid back by the Port of Anchorage. That could come in the form of higher fees or tariffs on goods that come through the port, translating into a cost increase for every product shipped through the port.

That imported cargo is delivered to an estimated 85 percent of the state's homes and businesses.

One fact sheet distributed by the port estimated that added fees would raise costs for Alaska households by about $800 to $1,000, through a few cents more at at the grocery store or lumberyard, over the life of the bond.

Get a lot of federal money.

Gov. Bill Walker has asked President Donald Trump's administration for money or low-interest loans to rebuild the port. Walker also asked the administration to resolve the lawsuit against the federal Maritime Administration over the project.

Get help from the state.

This could mean either a capital expenditure by the state or a general obligation bond that would appear on a statewide ballot.

In the interview, Berkowitz indicated that at this point, the most readily available options were a revenue bond or some degree of privatization.

"None of these by itself will solve the entire problem, but in combination they will," Berkowitz said. "We are fully confident that there are different funding streams able to support us in different phases."