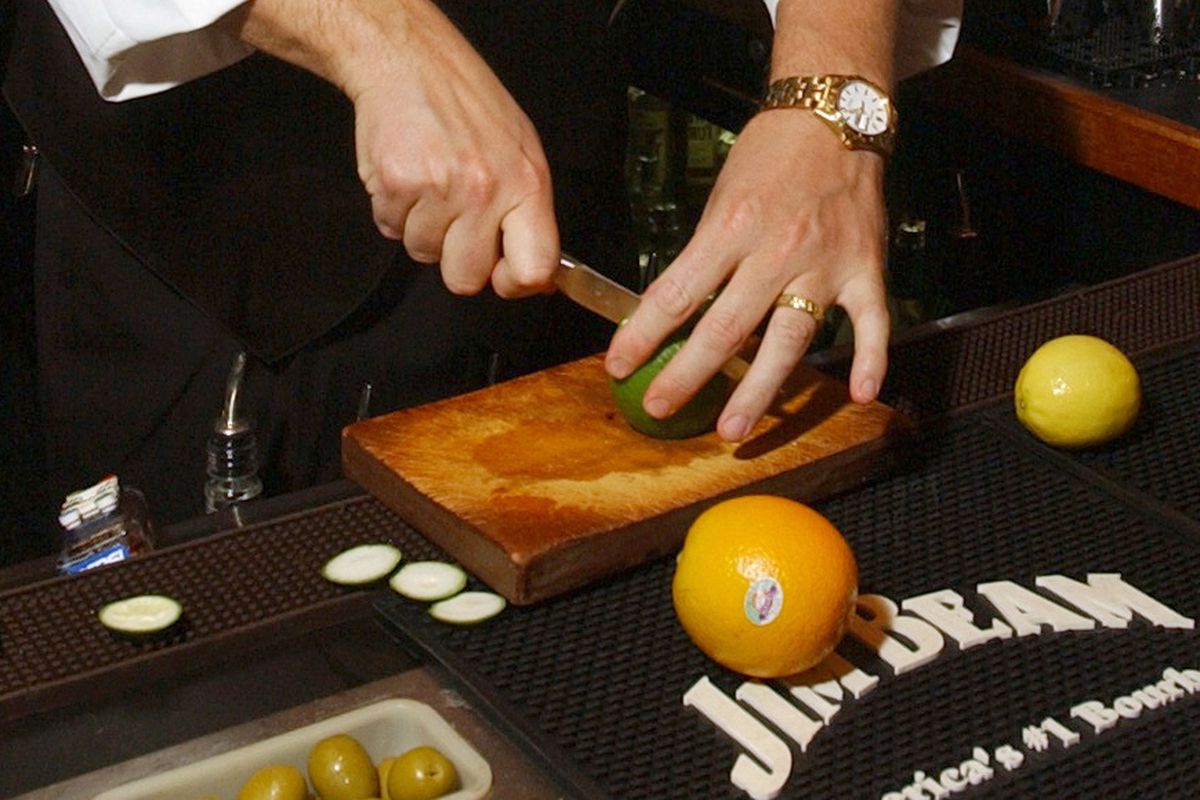 A bartender prepares for the evening shift by cutting fruit for drinks mid-afternoon in the Crow’s Nest of the Hotel Captain Cook. A proposed food regulation may require Anchorage bartenders to wear gloves when handling food. (Erik Hill / ADN archive 2007)

A bartender prepares for the evening shift by cutting fruit for drinks mid-afternoon in the Crow’s Nest of the Hotel Captain Cook. A proposed food regulation may require Anchorage bartenders to wear gloves when handling food. (Erik Hill / ADN archive 2007)

Anchorage bartenders and waiters may have to start using gloves or utensils to make mixed drinks with lemons, limes, olives or other garnishments if city health officials move forward with a recently unveiled update to local food safety laws.

This would be the most substantive update to the city's food safety laws since 2010. Among the key changes:

* Elimination of an Anchorage law that allows bare-hand contact in bars and restaurants when it comes to garnishing beverages. Right now, Anchorage bartenders are exempt from state laws that require gloves or utensils to handle any kind of food that's considered ready to eat.

* New regulations would exist for the sale in Anchorage of cottage food, or homespun, non-temperature-controlled products like bread, cookies, jams, pickles and relishes that weren't acknowledged anywhere in city law until earlier this year. Officials say the changes reflect the booming popularity of farmers markets in the state. The revised update would create new licensing requirements, such as an Anchorage food worker card and recipe submissions.

* Freshly caught fish could be cooked at 125 degrees, about 20 degrees below the temperature recommended by federal authorities. Members of the Anchorage restaurant industry requested the change, hoping to cook more tender, flaky fish, according to DeAnn Fetko, deputy director of the Anchorage Department of Health and Human Services.

* Wild mushrooms would no longer need to be reviewed by a certified specialist, a rule that hasn't been enforced because of the scarcity of those specialists, officials said. The state certifies mushroom producers, and Anchorage restaurants will be required to indicate on a menu that wild mushrooms are "not an inspected product."

* Wild game meat could be donated to food banks and cultural programs, an old local law that officials say was inadvertently left out of the 2010 update.

* Businesses would be required to clean and maintain "grease interceptors," or grease traps, at least every 30 days, and keep the records to show inspectors.

The proposed revisions have been in the works for about three years. Officials with the Anchorage Department of Health and Human Services have set up several open houses as well as a website to take public comment.

The update is largely modeled on the U.S. Food and Drug Administration's "model food code," a set of guidelines that stem from the federal government's research on safe food practices. The state of Alaska also has a food code, and Anchorage is the only local government in the state with its own regulatory authority when it comes to public health.

During the last major update to Anchorage's food safety laws, the restaurant industry pushed back against barring bare-hand contact for those handling food while preparing beverages. The city agreed to offer an exemption to give the industry time to adapt, according to Fetko, the deputy director of the city health department.

Outside of Anchorage, the state already does not allow for bare-hand contact when garnishing drinks, said Lorinda Lhotka, section manager with the state's food safety and sanitation program. She said health officials consider the practice a risk for foodborne illnesses like norovirus and hepatitis A.

Fetko indicated in an interview that it's time for Anchorage's grace period to end.

"Many local establishments have already incorporated this into their practices," Fetko said. "And this should be a straightforward practice for more industry and food providers to come into compliance with and implement."

In a follow-up email, Fetko said her department wasn't aware of data specific to foodborne illnesses in Anchorage. But she said the elimination of bare-hand contact with food that's ready to eat is seen by regulators as a critical intervention in stopping the transmission of disease.

Alaska has seen several noted cases of hepatitis A, Fetko added, including one 1982 case linked to a bartender who handled garnishes for mixed drinks with bare hands.

Kirsten Myles, the executive director of Cook Inlet CHARR, which represents more than 240 bars, restaurants, hotels and package stores in the Anchorage area, said her group understands the need for food safety laws and some degree of regulation. But she questioned the extent of the problem and said the rule would be burdensome and inefficient for restaurants.

"If you have to stop what you're doing in the middle of your show … there's lots of showmanship involved," Myles said. "It does cut into the experience, and adds time."

At South Restaurant, where intricate cocktails are a big part of the drink menu, gloves aren't always practical, said sous chef Kyle Goodell. He said gloves are worn at all times in the kitchen but not behind the bar.

If the city did change the law, Goodell said South would react by introducing tongs and gloves behind the bar. But that would pose a "hindrance" to the restaurant's operations, he said.

There's wide variety nationally on the bare-hands issue. In 2014, California went through a massive fight over a piece of legislation that sought to impose similar restrictions. The so-called "glove law" was in effect for just six months in 2014 before state lawmakers scrapped it, facing intense pressure from restaurant industry workers. But other states don't allow bare-hand contact at all, including Colorado and Indiana.

Myles said her industry group plans to challenge other new regulations seen as overly burdensome, such as the proposed maintenance regimen for grease traps.

The city is taking written comments until Sept. 22. Comments can be mailed to the Department of Health and Human Services, Attn: Food Code, 825 L St., Anchorage, AK 99501, or sent via email to foodcode@muni.org. The city has posted the new regulations online at muni.org/food.

Open houses have been scheduled for the following dates:

The next stop is the Anchorage Assembly.