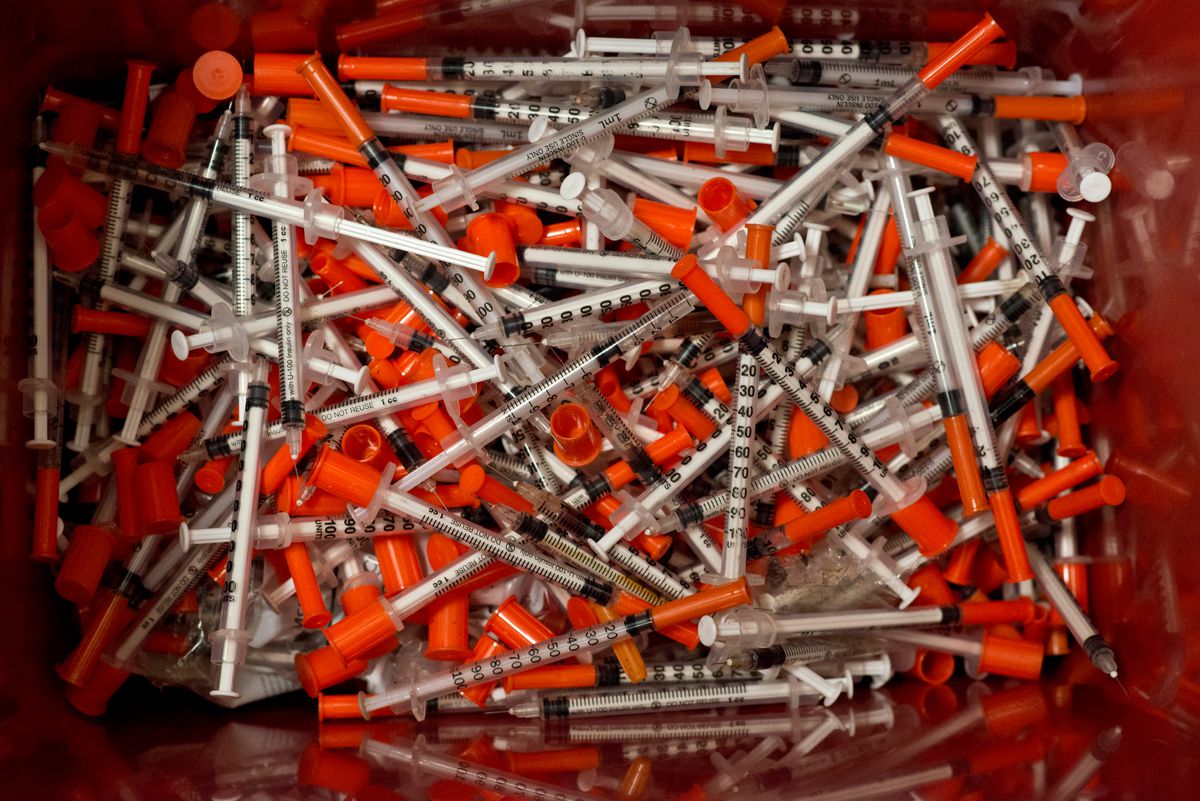 Some come in shiny trucks, others in beat-up vehicles. Some cruise up to the quiet office building on bikes. Some walk, sweating and chilled from withdrawals. A few arrive in work clothes, as if they've stepped out from an office or a construction site. Others wear pajamas.

Unless you're an injection drug user or you work or live nearby, you might never realize that more than 100 Alaskans come to this building on Fireweed Lane every weekday to pick up clean needles and other supplies for injection drug use.

[At Anchorage's busy syringe exchange, everyone has a story]

Needle exchanges are controversial. Critics see them as enabling drug use and crime. But public health officials in Alaska and nationally agree that they are a powerful tool in preventing infectious diseases such as HIV and hepatitis C.

The syringe exchange, run by the Alaskan AIDS Assistance Association, is the biggest in the state. In the midst of what Alaska's governor earlier this year declared an opioid public health disaster, it is overwhelmed with an ever-growing demand for its services.

"We never saw this coming, that the syringe exchange would grow so large," said Heather Davis, the executive director of the organization, which is informally known as Four A's.

In the last fiscal year ending in July, the group handed out a record 603,276 syringes.

Four A's runs the needle exchange program in Anchorage as well as one in Juneau. Fairbanks has one, and a program in Homer is open a few hours a month.

"Exchangers," as they are called, walk inside a serene office painted in autumn colors and wait for a turn to be escorted into a small supply room.

There they dump out their haul of used needles in biohazard waste containers and get fresh ones, plus tourniquets, cotton balls or the anti-overdose drug Narcan from friendly volunteers. They are encouraged to bring used needles in a stick-proof, sturdy container: 32 ounce fountain drink cups aren't great, but the thicker plastic detergent or Gatorade container is good.

But people bring them in anything. On a recent day in Anchorage, a woman carried in a patent leather pencil case in hot pink, with kittens on it. It was full of dirty syringes. Another brought hers in a takeout container from a grocery store deli.

The rules of the exchange are simple: If you come in empty-handed you get to take home five new syringes maximum. If you bring in 20 syringes you can get 20, up to a maximum of 50.

People drive up from the Kenai Peninsula and down from the Mat-Su valley area to visit, the staff says.

The volunteer asks for the person's age, gender and ethnicity, but never a name. In Anchorage, about 57 percent of exchange users are men. More than 70 percent are in their 20s and 30s.

Recently, about 100 new people have been visiting the exchange each month.

In the last fiscal year, 1,318 different people visited the exchange, a 40 percent increase in unique individuals served from the previous year.

Many came weekly, even daily.

[Anchorage is seeing a dramatic surge in heroin overdoses]

‘If we weren’t here, what would you do?’

When the Anchorage syringe program started in 2007, it was seen as a way for the group to find injection drug users at risk of HIV/AIDS and hepatitis C to offer them services, said executive director Davis.

Now, the syringe exchange's popularity has all but overwhelmed the other functions of the organization.

The exchange runs on a shoestring budget: just $67,000. The money comes from grants from private foundations and individual donations. The syringe exchange gets no money from the state or city to run the program, said Matt Allen, HIV prevention and education coordinator for Four A's.

Organizers recently started asking for donations from users — a dollar per visit is suggested. They could run out of money before the end of the year.

"With the increase in utilization of the syringe exchange, it now costs us approximately $8,000 per month (to run it), which will leave us short in late October or early November," Allen said.

The staff says they operate under the concept of "harm reduction," which seeks to reduce the negative consequences associated with drug use while meeting people "where they're at," Allen said.

"We polled people and asked, if we weren't here, what would you do. A majority of the people answered like, we would find a syringe on the ground, and use it," Allen said. "When people say you guys are enablers, if we weren't here they would still be using — they're deep in their addiction right now. We're just providing those clean supplies that they need."

Studies have shown such exchanges reduce HIV and hepatitis C infections, get people into treatment programs, prevent overdose deaths through education and save money by preventing infections that are expensive to treat, said Joe McLaughlin, the chief of the state Section of Epidemiology.

In Alaska, they are a critical tool in addressing an increase in rates of hepatitis C, he said. Alaska's rate of hepatitis C virus infection among young people has risen sharply in recent years, doubling between 2011 and 2015 among people in the 18- to 29-year-old age group.

Nationally, the increase is blamed on more people injecting drugs, a risk factor for contracting the virus. The same is probably true in Alaska, though no data are available yet to prove it, said McLaughlin. It's encouraging that more 18- to 29-year-olds use Anchorage's syringe exchange than any other age group, he said.

The increase in demand for the syringe exchange has begun to affect relations with other tenants of the two-story building the organization operates from, which also houses the ACLU of Alaska, Big Brothers Big Sisters, Standing Together Against Rape and other Anchorage nonprofits.

"It not only stresses us out, it stresses them out," said Davis. "We're hearing that people are not feeling comfortable in the building, and that's not OK."

BreAnn Kim is the co-owner of Pack Rat Antiques, directly across the street from the building housing the needle exchange. The increase in traffic at the exchange became more pronounced about a year and a half ago, she said. People walk right over looking to use the bathroom or sometimes to shoplift, she said.

"If we go two or three days without it, that's pretty good run for us," Kim said.

Every few months they find used syringes on their property, which they call the needle exchange staff to pick up.

Other building tenants have stories about exchange clients shooting up in the parking lot and arguing in front of the building, even shooting up outside.

Four A's staff say they do regular patrols of the area, trying to mitigate problems. In the past, they have banned clients from returning for not respecting the rules.

But Davis recognizes that the syringe exchange has far outgrown the office, a space it was never designed for. On one record day in June this year, 160 people showed up for supplies. Fifty-two of them arrived in the last hour the exchange was open, filling the lobby.

"We totally believe in the syringe exchange and what it does. We don't want it to go away at all," Davis said. "We just have to figure out a way to cope with its growth."

The group is drafting a letter to the mayor and city to ask for assistance, said the organization's development director, Petra Davis.

In theory, lots of people support syringe exchanges as a disease prevention tool, Davis said. But few want to get involved with serving a tough and unpopular constituency of injection drug users.

Executive director Heather Davis said she attended a recent Midtown community council meeting where the prevailing view was that addicts are responsible for many of Anchorage's ills.

"The opioid injection drug users are seen as what's causing everything wrong with this community," Davis said.

The city has no current plans to start a syringe exchange, said Department of Health and Human Services spokeswoman Shannon Kuhn.

For now, Four A's is cutting hours for the exchange in half in hopes it will give "breathing room" from constant needle exchange traffic for staff as well as other building tenants and neighbors.

Starting next week, the syringe exchange will be open only in the afternoons and Friday evenings, reducing the hours when users can exchange syringes from 40 hours a week to 17 hours a week.