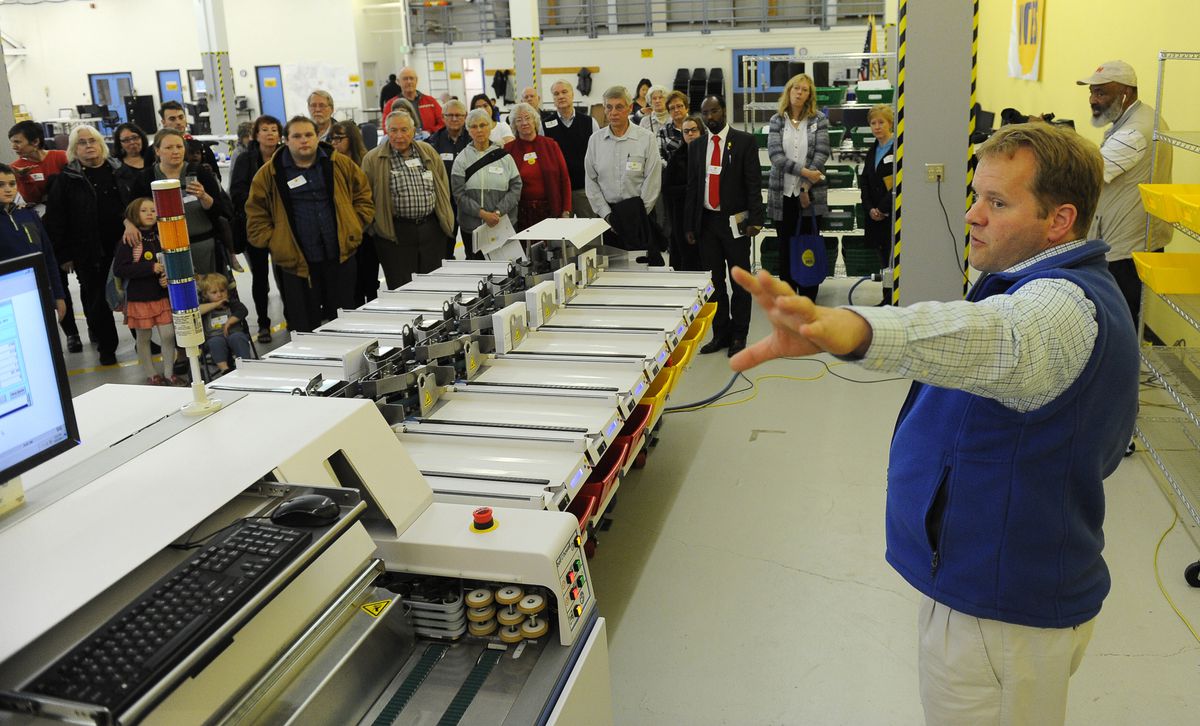 For a few noisy minutes on Thursday afternoon, envelopes zipped briskly into metal racks in a machine at a warehouse near downtown Anchorage.

The machine, an industrial mail-sorter designed to scan signatures, will be a key part of Anchorage's 2018 election — set to be the first in Alaska to be run almost entirely by mail. The city's 122 precincts will be largely replaced by drop boxes and U.S. mail, with a few in-person voting sites.

Proponents of vote-by-mail hope it will boost voter turnout. It's also likely to affect campaigning in a busy local election, with at least one contentious ballot measure and a race for mayor.

In early March, exactly three weeks before the election, officials will mail a ballot to every registered voter in Anchorage. Each voter will have until Election Day to mark the ballot, sign the front and postmark it. Voters can also drop them off in secure drop boxes around the city or at a few accessible voting centers until 8 p.m. on Election Day.

When the ballots return, they'll be taken to a warehouse in Ship Creek that is serving as the city's new election headquarters. At the back of the room sits a brand-new $600,000 mail-sorting machine, the kind used by giant insurance companies.

On Thursday, Dennis Wheeler, a former city attorney who has been working as a consultant on the vote-by-mail project, pressed a button on the machine to demonstrate how it works. A group that included state and local lawmakers gathered around, watching intently.

"This machine will run about 18,000 pieces an hour," Wheeler said, raising his voice over the whirring noise. "So we should be able to keep up."

The machine, built by the Illinois-based company Bell & Howell, will scan and sort envelopes containing ballots by precinct. It will also scan signatures, which will then be reviewed by two different elections officials to verify a voter's identity, Wheeler said.

From there, the ballot moves into a system of colored bins. Ballot envelopes that are empty, duplicated or smudged would go into metal racks above red baskets that indicate there's a problem with the ballot. If a person has a felony record or has died, it will also come out into the red basket area.

Green baskets with the good ballots will be carted to the middle of the floor. At that point, elections officials will separate ballot envelopes from the actual ballots using security envelopes, Wheeler said.

The ballots will then be counted in batches through new tabulating equipment that replaces the state's ancient AccuVote machines.

A key part of the system will involve using voter signatures to verify identities, but the city doesn't yet have signatures for every registered voter in Anchorage. So far, using precinct rolls, officials have collected the signatures of voters who participated in the 2015 Anchorage mayoral runoff election, as well as the 2016 and 2017 regular city elections and the 2016 state election.

If a signature can't be verified either before or in the 10 days after Election Day, the vote won't be counted, Moser said.

Elections officials plan to hold a mock election in December to work out kinks before the April race.

In shifting to vote-by-mail, Anchorage is joining dozens of cities and counties that hold all-mail elections, as well as three states: Washington, Oregon and Colorado.

King County and Thurston County in Washington have used vote-by-mail for years. Wheeler and other elections officials studied both counties as models for the Anchorage election.

One big selling point has been a boost in turnout. Anchorage typically sees turnout between 20 and 30 percent of registered voters in a local race. The goal is to raise that to more than 40 percent, said Joyce Anderson, director of the city's election commission and president of the League of Women Voters of Anchorage.

A 2016 report by the federal Government Accountability Office found that most studies on all-mail elections indicated that they increased turnout, though there are a variety of factors involved.

Anchorage elections officials have dramatically stepped up efforts in recent years to encourage people to vote early. Requests for mail-in ballots nearly tripled between 2012 and 2016, according to the Anchorage clerk's office.

Sen. Kevin Meyer, R-Anchorage, was among several legislators who attended the Thursday demonstration. He said in an interview the state will watch closely to see how the system works.

Former Anchorage Assemblyman Ernie Hall, who pushed for the shift while chairing the Assembly's election committee, called it "inevitable" that the state would shift to vote-by-mail sooner or later. He said it makes sense for a state where voters are often in far-flung places and can't always easily get to a precinct.

The state's voting machines, meanwhile, are worn out, Hall said.

Hall said he also expects that Anchorage will see changes in campaigning when there is no longer an Election Day on which most voters head to the polls.

"The thing that's not going to happen," Hall said, "is when people dump something in the mail on a Friday afternoon" before Election Day.

Justin Larkin, research analyst for Dittman Research, attended a stakeholders' meeting before the Thursday demonstration. Larkin said his company, which has worked for municipal candidates in recent years but does not yet have clients in the 2018 election, hopes to learn more about vote-by-mail as part of a broader election strategy.

"It will change how campaigns are run when people are voting over the course of weeks, as opposed to a single day," Larkin said.

Correction: An earlier version of this article incorrectly stated Thurston County was located in Oregon, instead of Washington state.