Spenard’s Paradise Inn — and its famous sign — headed for auction 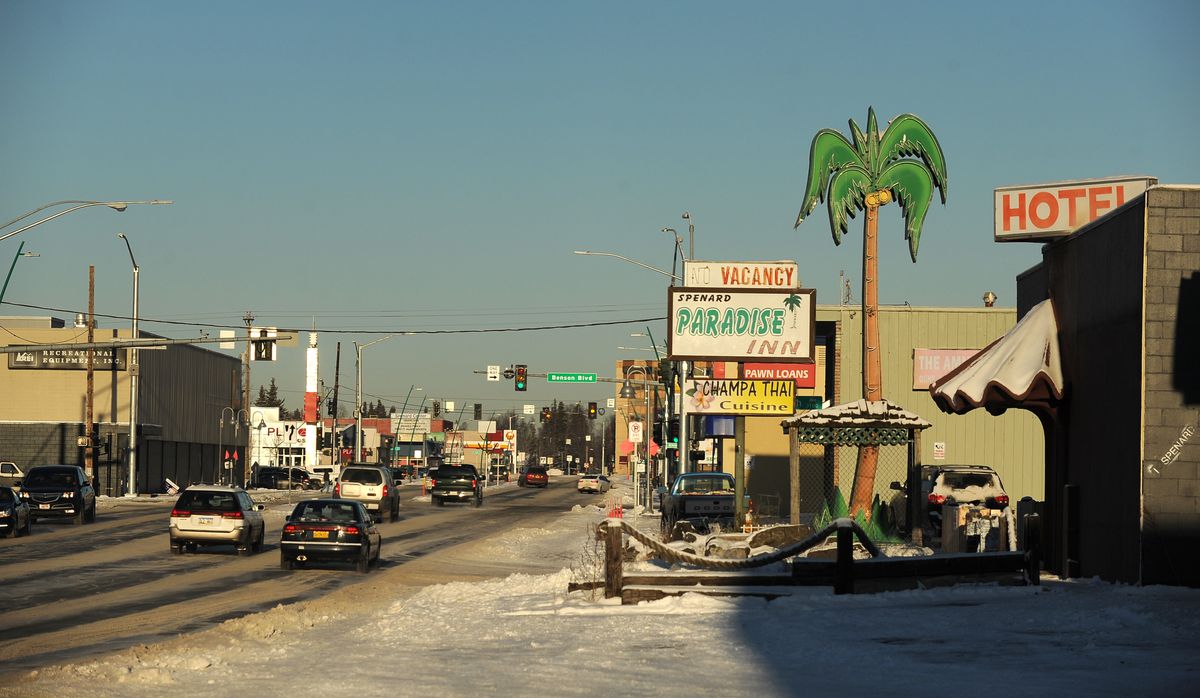 The Spenard Paradise Inn and Champa Thai Cuisine is closed and boarded up on the corner of Spenard Road and W 30th Ave. (Bob Hallinen / ADN)

The Spenard Paradise Inn and Champa Thai Cuisine is closed and boarded up on the corner of Spenard Road and W 30th Ave. (Bob Hallinen / ADN)

Most have never been to Spenard Road's Paradise Inn but many know its story-high neon palm tree, the one that casts a glow over the snow on winter mornings as buses rumble along and people file by with their chainsaws and engagement rings headed for the pawn shop on the corner.

After 55 years, the old tree, at once an Anchorage neighborhood landmark and, neighbors say, a beacon for the criminal activity that went on in the hotel for decades, will likely come down. Paradise officially became property of the United States Marshals Service and the FBI this month after its owner, Kyong Taek Song, was sentenced to prison for selling meth.

The date of its auction has not yet been set. It will be advertised online on the Government Services Administration auction site.

Spenard still has plenty of police sirens, prostitution and weathered mobile homes, but a few of the hard edges of the neighborhood have softened over the last decades — massage parlors and gritty bars giving way to a fresh juice shop, a spin studio and new housing. Locals are attached to the kitschy palm, one of the last few neon signs in the city, a relic from the neighborhood's history that seems worth holding on to.

Artist Duke Russell painted it. Prints hang on walls around the city.

"You know, it's kind of like when you are really trying to find something to love along Spenard Road, those are the kinds of things that seem like they were built with a certain level of integrity," he said. "But, I am sure some horrible things have happened inside there."

The inn was built in 1962, in mid-century California tiki style, with its neon tree and a front awning shaped like a clam shell. It opened at a time when the city was hard-up for hotel rooms to accommodate tourists, according to news clippings. Larger hotels downtown had not yet been constructed. It was previously called the South Seas Hotel and Lounge. Tom McGrath, a longtime businessman in the area, remembered visiting the bar in the '70s.

"At that time, it was a pretty popular place," he said.

But then its ownership changed, he said. It became a haven for sex trafficking and drug abuse, according to police. Neighbors tried for more than three decades to shut it down, McGrath said.

"We would call zoning enforcement, we would call the police, we would call everyone you could think of," said McGrath, who has long been involved in the Spenard Community Council. "It was just an open place for prostitution."

Detective Capt. Bill Miller, who has been with the Anchorage Police Department for 31 years, confirmed that the hotel had a chronic drug and prostitution problem. Though police would periodically arrest people there, it wasn't easy to shut it down.

"There is no leverage if you can't make that connection between the law-breaker and the property owner," he said.

McGrath said he'd sometimes come across tourists who stumbled into the Paradise Inn.

"Oh my God, it was a horrible situation in there," he said. "They weren't really looking for regular clients."

Then, one night in 2014, Song sold a Crown Royal whisky bag of meth to a government informant in the basement, according to a criminal complaint filed in federal court. After that, the hotel was finally boarded up and its residents evicted.

Song, 57, a South Korean citizen and permanent resident in the United States, pleaded guilty to drug conspiracy in federal court and was sentenced in July to more than six years in prison. He's currently serving time in Texas.

Once he finishes his sentence, he will probably be sent back to South Korea, according to court documents. Part of his sentence is also forfeiture of the hotel, which is currently valued by the city at $832,000. It's unlikely, however, it will sell for that price.

McGrath said the Paradise Inn is one of a number of poorly maintained and poorly managed hotels in Anchorage that are longtime magnets for criminal activity. The city doesn't have the resources it needs to enforce zoning and health codes to clean them up, he said. The hotels, where people often live long-term, become epicenters for neighborhood blight.

"(These hotels) charge enough rent that they can keep it up and run it responsibly but the owners are just putting all the money in their pockets," he said.

Miller agreed that the city could use more resources to investigate zoning and health violations. Police can now target property owners who have too many police calls to their property as well, he said.

It seems unlikely it will be cost-effective for the Paradise Inn to continue as a hotel, Barkeley said. There are numerous fire code violations that a new owner would have to deal with. And, he said, while Song's case wound through the legal system, people repeatedly broke into the hotel and squatted there. At one point people entered through the roof. There was an old school bus parked outside and someone living in the storage shed, he said. He went inside once, he said.

Caption
After the government took possession of the Paradise Inn in 2017, they spent $37,000 to clean up garbage and medical waste. (Photo provided by US Dept. of Justice)
Wait 1 second to continue.

"Drug use was evident, syringes," he said. "There were very dangerous and unsanitary conditions."

It was so unsanitary, in fact, that the government recently paid $37,000 to clean up the garbage and medical waste inside, hauling away 12 30-foot dumpsters and two 24-foot trucks of waste. In the cleanup process, one of the contractors found what looked like the corner of a baggie embedded in the drywall, he said.

"They did pull out of the wall a big ball of methamphetamine," Barkeley said.

The location lost its liquor license this year after more than a decade of violations. Most of the value is in the land, Barkeley said. It's possible the hotel could be used for law enforcement training before it is torn down. It's also possible that the iconic sign could be auctioned separately.

"It's completely up to the marshals and the FBI," he said.

The inn is at least the second property on that stretch of Spenard Road to be sold under such circumstances. The old PJ's strip club, near 36th Avenue and Spenard Road, was auctioned after the owner's sentencing in 2011. A housing complex has been built in its place.