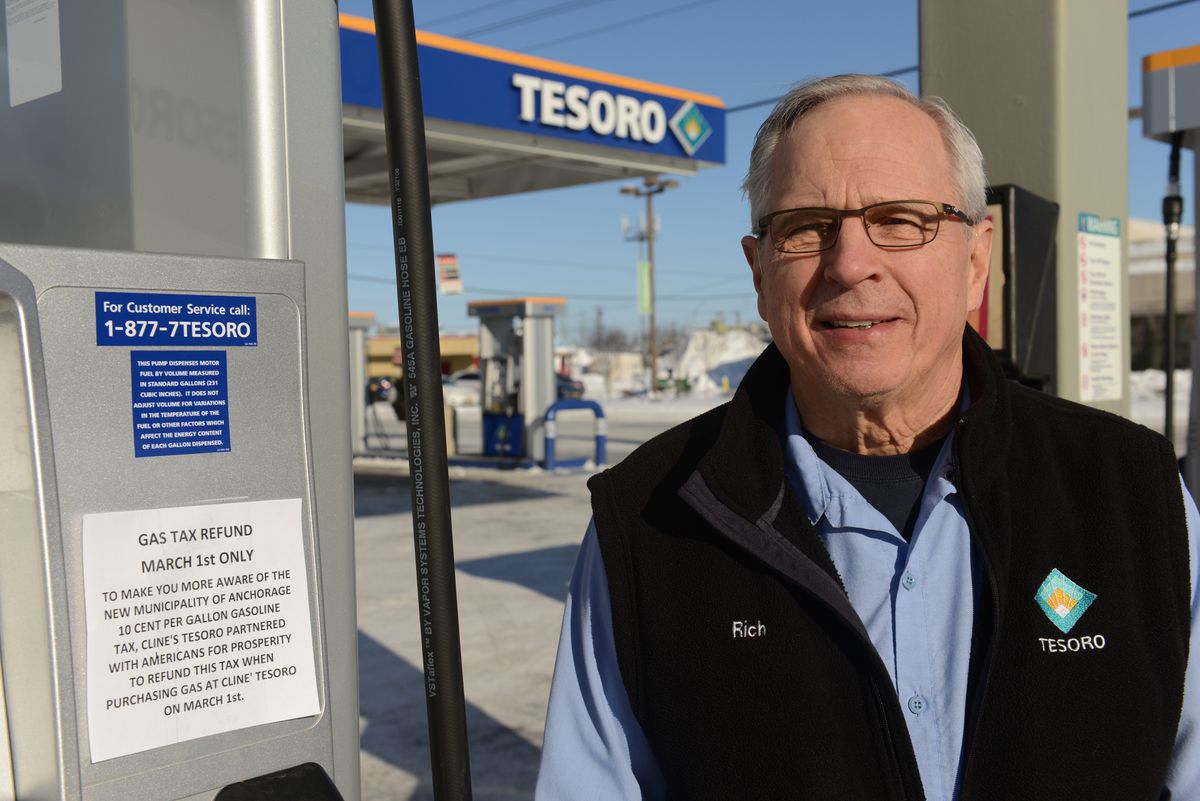 Rich Cline will refund the new 10-cent-per-gallon gas tax that will be implemented on March 1 in Anchorage at Cline’s Tesoro on the corner of Gambell Street and Fifth Avenue in conjunction with Americans for Prosperity. (Bob Hallinen / ADN)

Rich Cline will refund the new 10-cent-per-gallon gas tax that will be implemented on March 1 in Anchorage at Cline’s Tesoro on the corner of Gambell Street and Fifth Avenue in conjunction with Americans for Prosperity. (Bob Hallinen / ADN)

Anchorage drivers will pay an extra 10 cents per gallon at the pump starting Thursday, with the city's first-ever tax on gasoline and diesel fuel taking effect.

Mayor Ethan Berkowitz made the gas tax a key part of his 2018 budget plan, saying the city should rely less on property taxes to pay for general services.

The tax is expected to raise about $14 million annually. The average homeowner will see about a $130 property tax cut this year as a result, officials said.

Meanwhile, a car that drives 10,000 miles a year at 23 miles per gallon will pay an extra $43 each year for gas, officials said. About one-fifth of the tax revenue will come from tourists, commuters and other non-Anchorage residents, according to an estimate from city treasurers.

Anchorage does not have a general sales tax, unlike many other Alaska towns. The city taxes certain goods and services, like cigarettes and marijuana, rental cars and hotel rooms.

However, Anchorage appears to be the first city to levy an excise tax exclusively on motor fuel, said Larry Persily, a former deputy state revenue commissioner who has worked on various sales tax proposals over the years. It's coming on top of the existing state fuel tax of eight cents per gallon. The state tax has been in effect since 1961 and is the lowest in the United States, Persily said.

But local businesses that rely on driving were among those alarmed by the prospect of the new tax.

"Right now we're in a recession, and margins are already tight," Strong said. "This just adds a bigger impact on our business and cuts down on ability to grow."

He said he didn't expect to halt his delivery service or raise prices. But he said it could affect hours or other parts of the business.

DeAndre Bradshaw, one of the owners of the Anchorage delivery company 907 Deliveries, said his company may have to look at raising rates.

And Rich Cline, the longtime owner of the Tesoro station at Fifth Avenue and Gambell Street, planned a protest of sorts for Thursday. Drivers who come by the station will be reimbursed the amount of the tax.

Cline said his station sees a lot of drivers from the Valley. He said he worries Valley drivers will choose to fill up closer to home before driving to work.

The reimbursement money is coming from the Alaska branch of Americans for Prosperity, the Virginia-based advocacy organization founded by the billionaire industrialist Koch brothers. Jeremy Price, the director, said his organization questioned the need for the new tax and suggested the Berkowitz administration focus on cutting spending.

The Anchorage Assembly approved the tax in November. Anchorage Assemblyman John Weddleton, who voted in favor of the tax, said the "battle cry" for years has been that the city relies too much on property taxes.

"This is a pretty common, simple alternative," Weddleton said. "The cost to collect it is cheap."

By Wednesday, 11 dealers who sell or transfer motor fuel had registered to remit the tax, said Blyss Cruz, the principal administrative officer at the city finance department. She said the city had sent out letters to all of the dealers are registered to pay the state tax, hoping to alert everyone who qualified to pay the tax in Anchorage.

More information about the new gas tax is available on the city finance website.