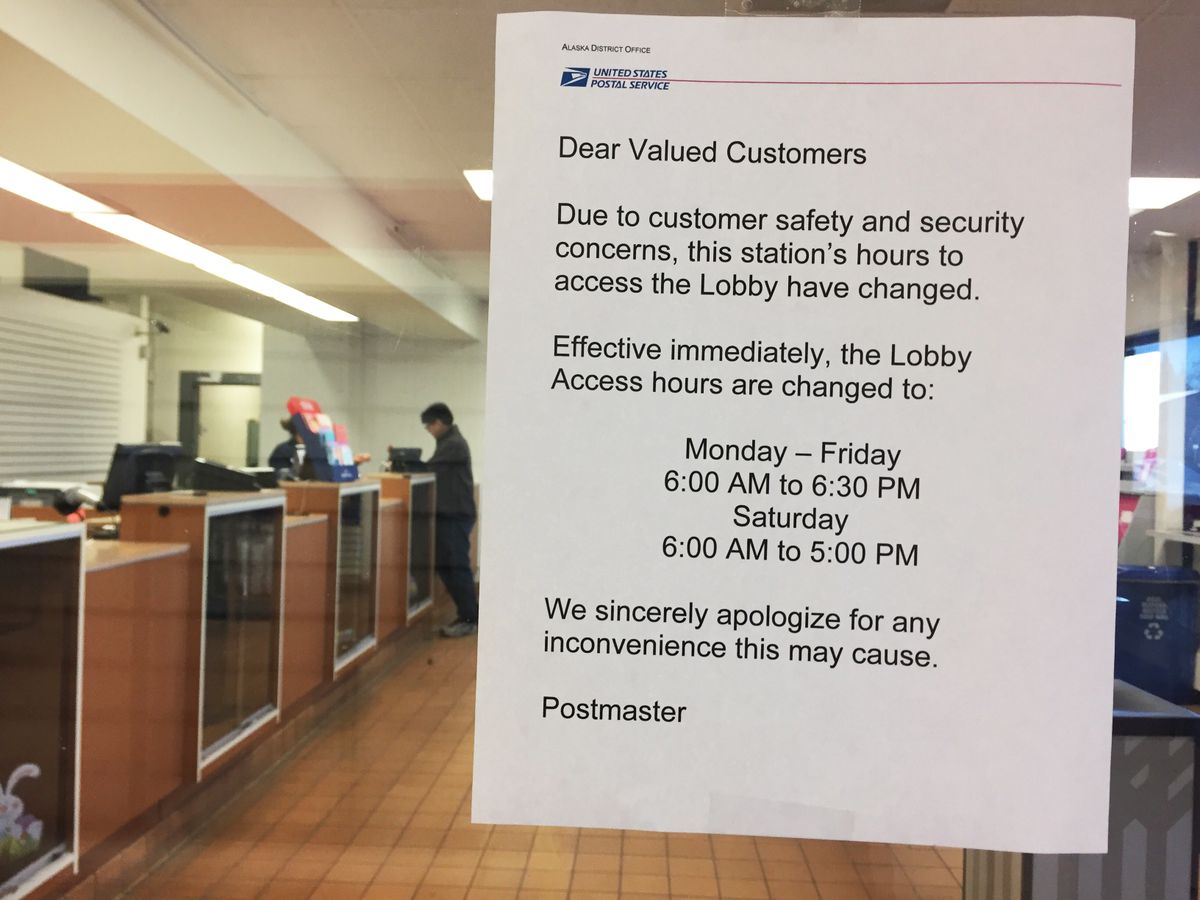 A sign shows shortened hours “due to customer safety and security concerns” at the U.S. Postal Service office at Ninth Avenue and Ingra Street in Anchorage on Wednesday, March 21, 2018. (Devin Kelly / ADN)

A sign shows shortened hours “due to customer safety and security concerns” at the U.S. Postal Service office at Ninth Avenue and Ingra Street in Anchorage on Wednesday, March 21, 2018. (Devin Kelly / ADN)

A U.S. post office near downtown Anchorage shortened its hours earlier this month after officials discovered roughly 20 people had bypassed a locking system and spent the night in the lobby, causing a mess.

It was the last straw for postal officials, said Dawn Peppinger, manager of marketing for the U.S. Postal Service in Anchorage. The post office, at Ninth Avenue and Ingra Street, has routinely encountered issues associated with homelessness and vandalism, but Peppinger said this case was particularly egregious.

"Basically, they were using our lobby as a restroom," Peppinger said. "And that's a very major concern for the safety of employees."

Some of the people appeared to be intoxicated and became confrontational when asked to leave, Peppinger said. Post office staff called police for help escorting people from the building, Peppinger said.

After that, the postal service started closing the lobby at 6:30 p.m. instead of 8 p.m. Monday through Friday, and at 5 p.m. Saturday. A sign posted on the door of the post office announcing the new hours references "customer safety and security concerns."

The change gives the post office more control to conduct security sweeps to make sure people aren't remaining in the building after it's locked, Peppinger said.

Peppinger said the shorter hours and heightened security reflect a broader trend among Anchorage businesses downtown, near where many of the city's social services are located.

"Inebriated people, confrontational people, people just basically sleeping in our lobbies … it's a concern," Peppinger said. "Several businesses in the downtown area share the same concern we do."

Peppinger said postal officials are especially concerned that customers who come early in the morning to check mail would encounter people who were sleeping or intoxicated.

The change to lobby hours only applies to the Ingra post office, Peppinger said. But she said that if issues crop up at other locations, the postal service may consider making a similar change.

She said officials were sorry to inconvenience customers. The Anchorage Post Office on Northern Lights Boulevard and the Anchorage main office on Postmark Drive are both open 24 hours a day, Peppinger said.

"It really is in the interest of safety and security," Peppinger said.