‘Somebody’s got to do it’: Anchorage Assembly members propose ban on plastic shopping bags 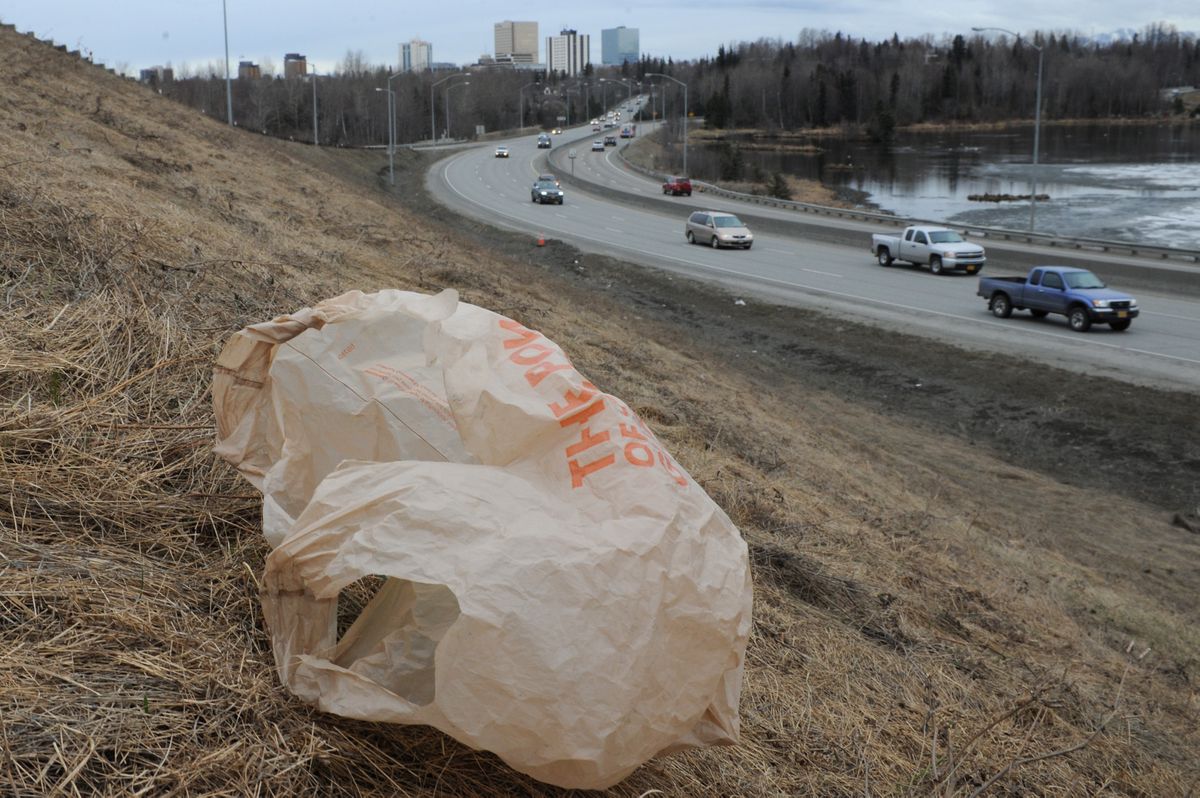 A plastic bag tumbles in the wind on the Hillcrest Drive offramp as motorist travel along Minnesota Drive on April 26, 2017. (Bill Roth / Alaska Dispatch News)

A plastic bag tumbles in the wind on the Hillcrest Drive offramp as motorist travel along Minnesota Drive on April 26, 2017. (Bill Roth / Alaska Dispatch News)

A string of Alaska communities have banned plastic shopping bags in recent years, and Anchorage may be next.

Members of the Anchorage Assembly say they plan to introduce ordinances in the next few weeks that would either levy a tax on plastic shopping bags or ban them entirely.

"Somebody's got to do it," said Assemblyman Dick Traini, who represents Midtown. "We've got to take care of the future."

Traini and fellow Assemblyman Chris Constant said they're concerned about  non-biodegradable trash bags littering the city. Local groups have also been calling for the ban, such as a South Anchorage faith group, said Assemblywoman Suzanne LaFrance.

The concerns mirror those voiced in fishing hubs, rural villages and more recently, the biggest cities in the Mat-Su Valley. The bans follow national trends in the past decade amid rising alarm over the sheer volume of plastic shopping bags in the environment.

San Francisco became the first city in the U.S. to create a ban, in 2007, outlawing thin plastic bags and adding a 10-cent fee to paper bags. A California statewide ban on single-use plastic bags in pharmacies and groceries followed in 2014.

Hooper Bay, an Alaska village on the Bering Sea coast, enacted a ban in 2009. Community members were fed up with seeing bags littering shores and beaches and snarled in plants while out berry-picking.

Bethel passed its ban that same year, after an earlier failed effort. The ban included plastic takeout containers, which were littering the tundra. The Alaska Commercial Co. does, however, provide thin, single-use biodegradable bags for customers in the region.

Cordova, the Southcentral fishing hub near the mouth of the Copper River, enacted a ban in 2016 after local advocates said it would promote healthier oceans. Then, earlier this year, the fastest-growing part of Alaska joined in. Wasilla passed a ban first, followed by Palmer.

The mayor of Wasilla, Bert Cottle, has said residents were tired of seeing the bags littering the roadways.

Around the same time, the Mat-Su Borough was considering a plastic bag tax, but dropped the idea after Wasilla took action.

While becoming more common, bag bans can also encounter steep opposition in a state known for a libertarian streak. The Fairbanks North Star Borough rescinded a 5-cent bag tax a month after approval in 2009, amid a public outcry.

Homer's bag ban was enacted in 2012 but repealed by voters a year later. Repeal leaders lambasted it as "nanny state overreach."

In the Alaska Legislature, an effort by Anchorage Democratic Rep. Andy Josephson to create a 20-cents-a-bag tax stalled last session. The national plastics industry hired a Juneau lobbyist to argue the measure would burden businesses and not help the environment.

Jeffery Temple, a Portland-based spokesman for Fred Meyer, said the store supported whatever constituents decided was best for their community. He did say that Fred Meyer is a big advocate of recycling plastic bags, and it has a higher recycling rate than paper.

"While plastic is a threat (ocean pollution is most often cited) due to past practices, there are more sustainable aftermarket practices now for plastic and great strides are being made to remediate those past sins," Paul Petillo, a expense, sanitation and sustainability manager for Fred Meyer, wrote in an email forwarded by Temple.

Constant, one of the Anchorage Assembly members helping draft an ordinance for a ban, said Anchorage should follow the example set by other towns, like Wasilla in Palmer, to stem trash problems.

"We need to get in line," Constant said. "Single use plastic is so gross."