‘What am I supposed to do with these things?’ Plastic bag ban puts some Anchorage businesses in a bind 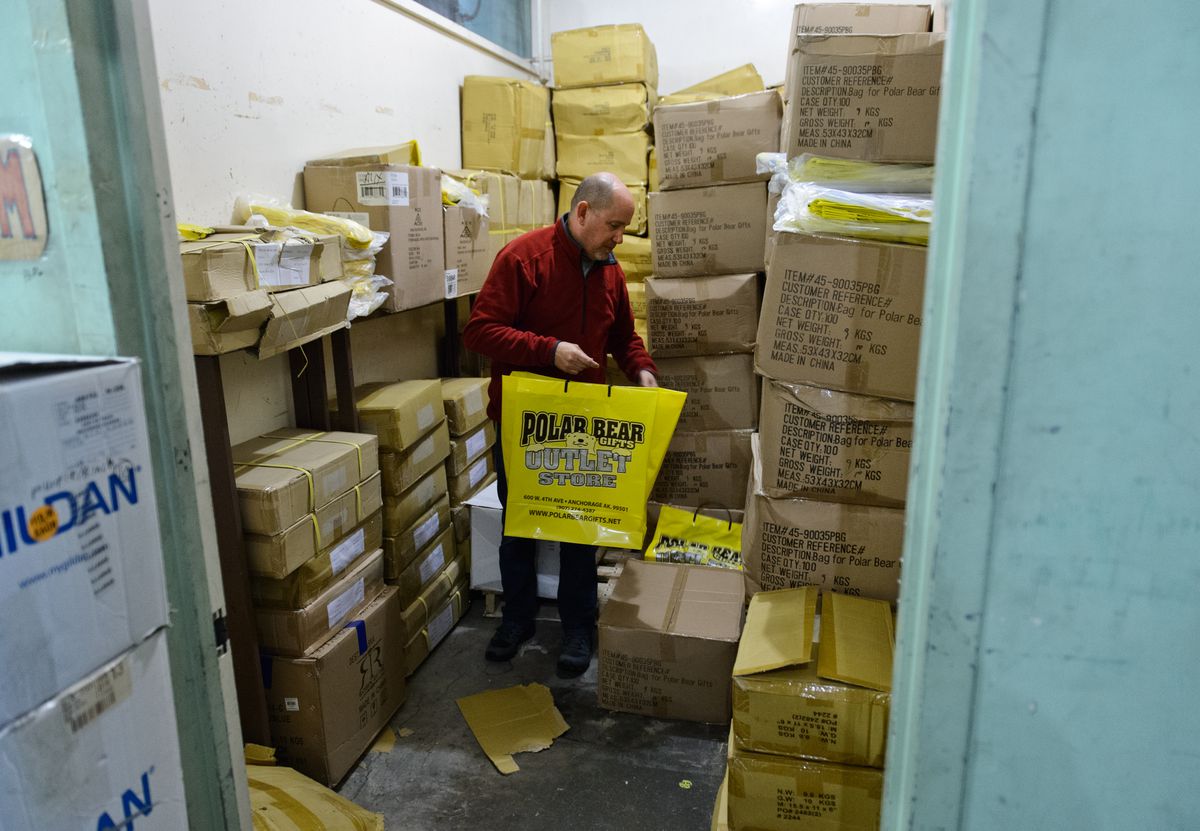 Jay Green has thousands of plastic bags stored at his Polar Bear Gifts. He said it’s unclear what will happen to them when a plastic bag ban goes into effect. (Marc Lester / ADN)

Jay Green has thousands of plastic bags stored at his Polar Bear Gifts. He said it’s unclear what will happen to them when a plastic bag ban goes into effect. (Marc Lester / ADN)

Many of the bags were ordered two years ago, said Jay Green, the store's owner. But in March 2019, a new local ban on plastic bags will prevent Green from distributing his stockpile of bags to customers. Green said there's no way he'll run out by then — but he doesn't want to throw out the bags either.

"What am I supposed to do with these things?" Green said, standing in the room recently.

Green's question is being echoed by a number of Anchorage business owners after a majority of the city Assembly voted Aug. 28 to approve a stringent ban on plastic shopping bags.

As well as barring retailers from handing out single-use plastic bags, the new law requires a 10-cent fee for paper bags. Reusable cloth or woven plastic bags can be handed out for free, and exceptions include plastic bags used to carry bulk food and vegetables, line trash cans, or carry dog poop.

[How Anchorage's plastic bag ban will affect the way you shop]

The ban is the latest to be adopted in Alaska and in the Lower 48. City officials and other advocates said they were alarmed by a proliferation of flimsy plastic bags littering the city.

Some retailers were caught off-guard when the Assembly extended the ban to thicker plastic bags, which are allowed in Wasilla and Palmer. They say they order plastic bags in bulk to contend with Alaska's high shipping prices, and the six-month deadline isn't enough time to use them.

The ban itself is facing a referendum challenge. David Nees, a retired math teacher who often runs for local office, and Michael Chambers, the past chair of the Alaska Libertarian Party, applied for a referendum petition on Sept. 14, records show.

If the petition passes a review by the city clerk's office, Nees and Chambers would have another 90 days to collect the several thousand signatures needed to get a referendum on a future city ballot. Nees said in a phone interview he thought voters should be given a chance to decide on the ban.

Meanwhile, supporters of Anchorage's new ban say they're coming up with ways to help businesses and residents adapt.

The group hopes to make enough bags to hand them out for free at grocery or retail stores, Munson said.

Munson is also a member of Plastic Free Anchorage, a loose association of bag ban supporters that helped push for Anchorage's new law. Munson, who has also worked on local zero-waste projects, said people can switch to reusable bags by forming habits. Little tricks like putting reminder notes in the car can help, Munson said.

Munson also encouraged people to be creative about reusing other types of plastic bags, like orange newspaper bags or bread bags, to carry dog poop or to line trash cans.

In downtown Anchorage, business owners said they supported banning the thin plastic bags used at major grocery stores. The problem was the timeline, and the ban on the thicker plastic bags often used by smaller retailers, they said.

Green, the owner of Polar Bear Gifts, said he didn't think paper bags would work for heavier purchases. His store sells a wide variety of souvenirs, including clothing, he said. Tourists aren't likely to bring in their own bags, Green added.

Green estimated that his warehouse contains more than $30,000 worth of plastic bags imprinted with his store's logo. He orders the bags in large containers directly from China and Laos because it's cheaper, he said.

Jana Hayenga owns three stores in downtown Anchorage, including Cabin Fever. She said she supported the ban but was concerned about the timeline.

Like Green, Hayenga orders tens of thousands of preprinted bags at a time. She said she's sitting on about a three-year supply, or $15,000 worth.

"It's an economic loss, but also, to dump that in the landfill … that's not exactly the footprint I think they're going for," Hayenga said.

City officials and Munson didn't have an immediate answer to the retail problem of excess bags but said they were working to come up with a plan.

Assemblyman Christopher Constant said he was working with the Anchorage Museum to spearhead an art project that uses business's excess plastic bags. He said he envisioned a follow-up to the museum's 2014 exhibit called "Gyre: The Plastic Ocean," an exhibition that featured plastic collected from beaches around the world.

In an email, Julie Decker, the director of the museum, said Constant had approached the museum with his idea. She said nothing is set in stone, and the idea would go through a process to see if there's artist interest and support from other organizations.

Anchorage Assemblyman John Weddleton, who owns a comic book store in Spenard, had suggested the March deadline to give businesses time to adapt. He said he thinks Anchorage's ban goes too far but it could save businesses money over time if customers are forced to switch to reusable bags.

Weddleton also said he surveyed similar retailers in other areas and found bag bans to be a non-issue.

"Uniformly they said it's not a big deal, you'll figure out it, you'll be fine," Weddleton said. "It's just wrapping our head around it creatively."

Weddleton said retailers could donate the bags to nonprofit organizations like Visit Anchorage, as a form of free advertising. Munson, of Boomerang Bags, suggested a downtown "bag library" where people could take and return reusable bags as needed.

"However it happens, it's giving bags to people who need them and helping people develop these habits as a community," Munson said.

On Thursday, the University of Alaska Anchorage Center for Community Engagement & Learning will host a workshop on going plastic-free. The event is scheduled from 3 p.m. to 4:30 p.m. in the UAA Student Union Cafeteria.