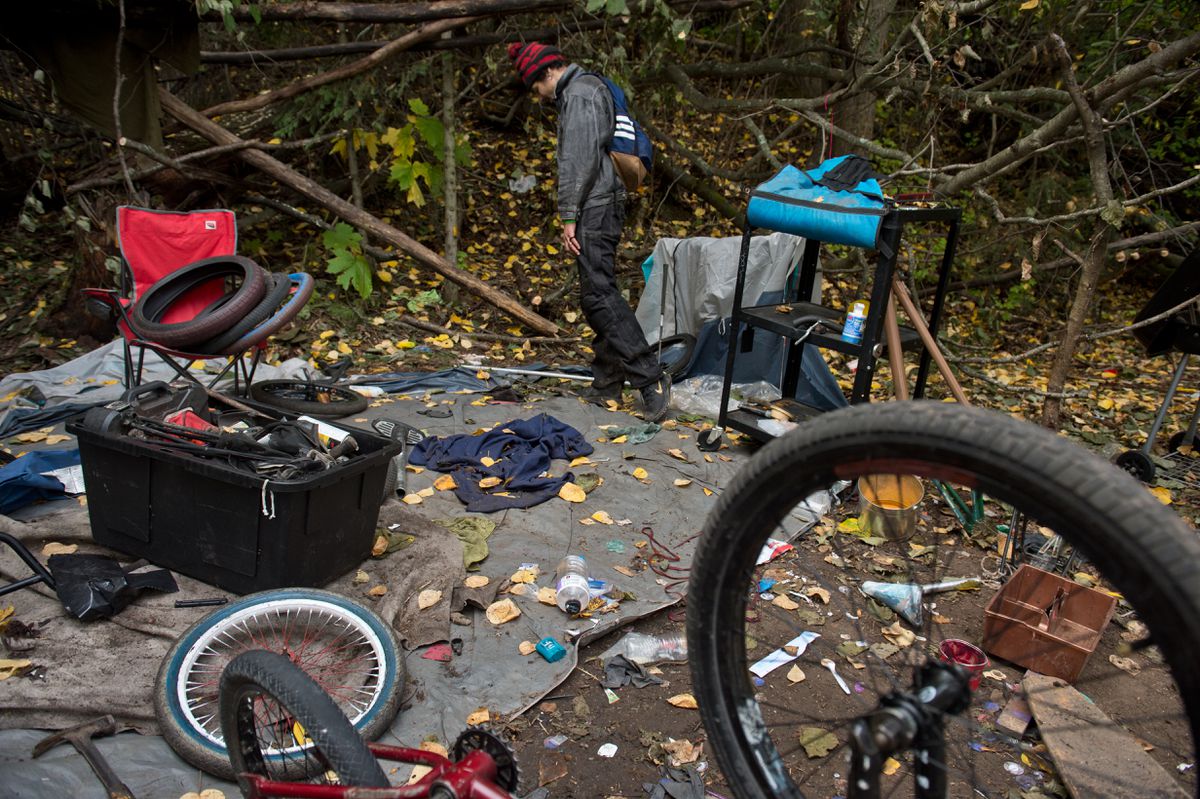 A camper packs up items in the woods near Spenard Road and the Chester Creek greenbelt on September 21, 2018. City officials began a pilot program to clean up homeless camps in three days, while allowing evicted campers to store their belongings for 30 days at Central Transfer Station. (Marc Lester / ADN)

A camper packs up items in the woods near Spenard Road and the Chester Creek greenbelt on September 21, 2018. City officials began a pilot program to clean up homeless camps in three days, while allowing evicted campers to store their belongings for 30 days at Central Transfer Station. (Marc Lester / ADN)

The scene looked like one of the routine cleanups in the city's many illegal encampments in public parks and greenbelts. But something was different. Not all the stuff was being hauled to the dump.

Instead, some of it was being stored. Four miles away, at the city's Central Transfer Station on East 54th Avenue, a pair of khaki-gray shipping containers were waiting.

It was sign of another stage in Anchorage's evolving policies toward homelessness and illegal camping in public places. For years, the possessions of the campers, and their right to them, has stopped the city from quickly clearing camps. In the past, city officials insisted that it would be too time-consuming and complicated to store belongings, which would have allowed for quicker expulsions.

Now Anchorage is re-thinking its approach, inspired by larger cities in the Lower 48 that have confronted similar problems.

City officials say the new storage strategy allows for camps to be cleared with just three days' notice to the occupants. A year ago, the city had to give 15 days' notice before throwing out people's belongings; in December 2017, facing mounting public concern, the city Assembly tightened the window up to 10 days. The city says it's walking a line to avoid a repeat of a 2011 civil rights lawsuit.

Ray Pikonganna, 20, had been living at the Westchester Lagoon camp. He had black hair that was dyed with shades of purple and green, and wore a long black coat with sleeves extending past his hands. He pulled a piece of folded paper out of his pocket and unfolded it. It listed contact information for Rosa Salazar, the city employee coordinating the storage. It showed bus routes, a 32-minute ride from his current location to East 54th Avenue.

Pikonganna said the city was storing a few bags of clothes and a backpack. He just couldn't take everything with him. Instead of the usual 10-15 days, Pikonganna only got three days to move. He said it didn't feel like quite enough time.

But the policy shifts come amid a crescendo of fury and frustration among people who live in neighborhoods along Anchorage's greenbelts.

Some of that frustration played out in emotional meetings in a conference room on the eighth floor of City Hall, and on social media forums like Nextdoor.com. Neighbors pointedly asked Anchorage Assembly members and city officials about their plans to remove illegal encampments.

Much of the frustration is captured in a 12-point-plan devised by Stephanie Rhoades, a former Anchorage superior court judge, and her husband, Russ Webb, who once chaired the board of the Alaska Mental Health Trust Authority. The two former public officials contend the city has been too narrowly focused on housing and is not doing enough to respond to camping in public spaces, which they say create health and safety risks.

Anchorage should develop a systematic approach to both camping and housing, Rhoades and Webb said. They say the current system is too permissive toward campers who are not truly disadvantaged or disabled. They said the city could make changes while increasing availability of emergency shelters and providing temporary storage of campers' belongings.

For several years, the city had been working on ways to change its storage policies, city officials said. Those efforts culminated in the Sept. 21 trial in Westchester Lagoon.

The city picked the Westchester Lagoon camp because it was near a preschool, said Salazar, the storage coordinator for the city.

The cleanup was calm and orderly, but it was met with mixed reactions by the campers.

Toni Anaruk, who said she was helping a friend who lived in the camp, said the woods are much cleaner now, but the city's actions weren't going unnoticed.

"This is them tightening up," Anaruk said. "They didn't do this last year, last summer. They're really cracking down hard because they don't want people on the streets."

Three days before the clean-out, Tanya Vandenbos, a city social worker who conducts outreach at camps and the emergency shelters, came to the camp and handed out her card. That way, she said, campers would know who she was when she returned.

Nancy Burke, the city homeless coordinator, said the city intends to clear camps and store belongings more broadly and frequently in the summer of 2019.

"This can't work for a community," Burke said.

She said the city needs a "carrot-and-stick" approach. None of the campers would have sought services if they'd just been allowed to stay there, Burke said.

But she also acknowledged that right now, it takes too long to move people into shelter or housing. She said the city hopes to have created more housing options by next summer.

Storage has come up again and again in the city's struggle with illegal camping the past decade.

At one time, city and police officials — including Burke and Sgt. Jen Haywood with APD's Community Action Policing team — toured a city-owned building in Mountain View that was seen as a candidate for warehousing the belongings of homeless campers. But the building was never used.

Police, in particular, did not want to deal with storage. It seemed to be far too time-consuming, said Haywood.

"(For) APD to be involved in that chain of custody … it would just limit our time out there to deal with (other) issues," Haywood said.

Then, in April, Haywood and Burke were part of a group that traveled to Denver and Colorado Springs as part of a conference to present the city's work to use GIS mapping to track camps. Many of the same officials traveled to Seattle in early September to visit a shelter run by the Downtown Emergency Service Center, one of the biggest contractors in town.

In Denver, police officials went on a ride-along and observed storage procedures, Burke said. At the Seattle shelter, the officials learned about protocols for people who are evicted from camps but don't come to the shelter, Burke said.

Now, police have largely stepped away from dealing with storage, leaving it to Salazar and the city parks and recreation crews.

Storage makes it so people don't have to start all over in a new place, said Vandenbos, the social worker.

As the camp dispersed on Sept. 21, one man, who refused to give his legal name, was gathering up a work bench, a toolbox, several tires and bike frames. He said he liked fixing things.

He and others insisted they hadn't stolen the items, as neighbors along the trail system suspect. They said they were legally purchased, traded for or "gifted."

Haywood, the police sergeant, said she didn't buy that — a view shared by Rhoades, Webb and others who live along the trails system.

"I can guarantee you they don't acquire those things by buying them," Haywood said.

But there's not much police can do, Haywood said. Most of the time, the owner of a stolen bike didn't record the serial number and report it stolen, Haywood said. She said only a fraction of the bikes recovered from camps are actually proven to be stolen.

After collecting the items the camp's residents wanted stored, a large truck brought the items to the Central Transfer Station. Two workers unloaded the roll carts from the back and wheeled them into an open Conex, donated by the city's water and wastewater utility. Salazar checked the names, written on white labels, and filled out a spreadsheet.

The city can't store belongings infested with mold or mildew. There are guidelines for what constitutes "trash." But city law defines a variety of other property that must be stored in good condition, such as tents and shelters, sleeping bags, toiletries and cosmetics, photographs, generators, cooking equipment and "property stored in a manner that reasonably suggests the owner intended to keep it.

The day of the clear-out, Pikonganna and other campers weren't sure where they were going to go next.

The man who said he liked fixing bikes insisted he suffered from claustrophobia and wouldn't live within four walls.

"I tried it all sorts of different ways. Someone paying rent for me. Me paying rent myself. It's just … confined space. With that surcharge of, if you do this, just know, I can come kick you out immediately," the man said.

Melina Breeland, one of the members of the city's mobile team of social workers that responds to camps, said that of the hundreds of people she'd encountered over the years on the street, she'd only met two who truly wanted to live outside. She said it was possible the man was the third.

But it's far more likely that he doesn't want to go to the city's emergency shelter because it's too crowded and chaotic, Breeland said.

Pikonganna said the Westchester camp was "sort of like home." He described a crew that had hung together for several years, helping each other out, fixing bikes and bartering goods with other campers.

Pikonganna said he had a place to live up until about six months ago, when he lost his job at Subway. He doesn't have a lengthy court record: He was convicted in July of misdemeanor forgery, where he was accused of stealing checks that totaled about $1,500. In a charging document, Pikonganna told police he was trying to cash the checks for his boyfriend at the time, who didn't have an ID.

Pikonganna said he wants to go back to paying rent and bills, like when he had a job.