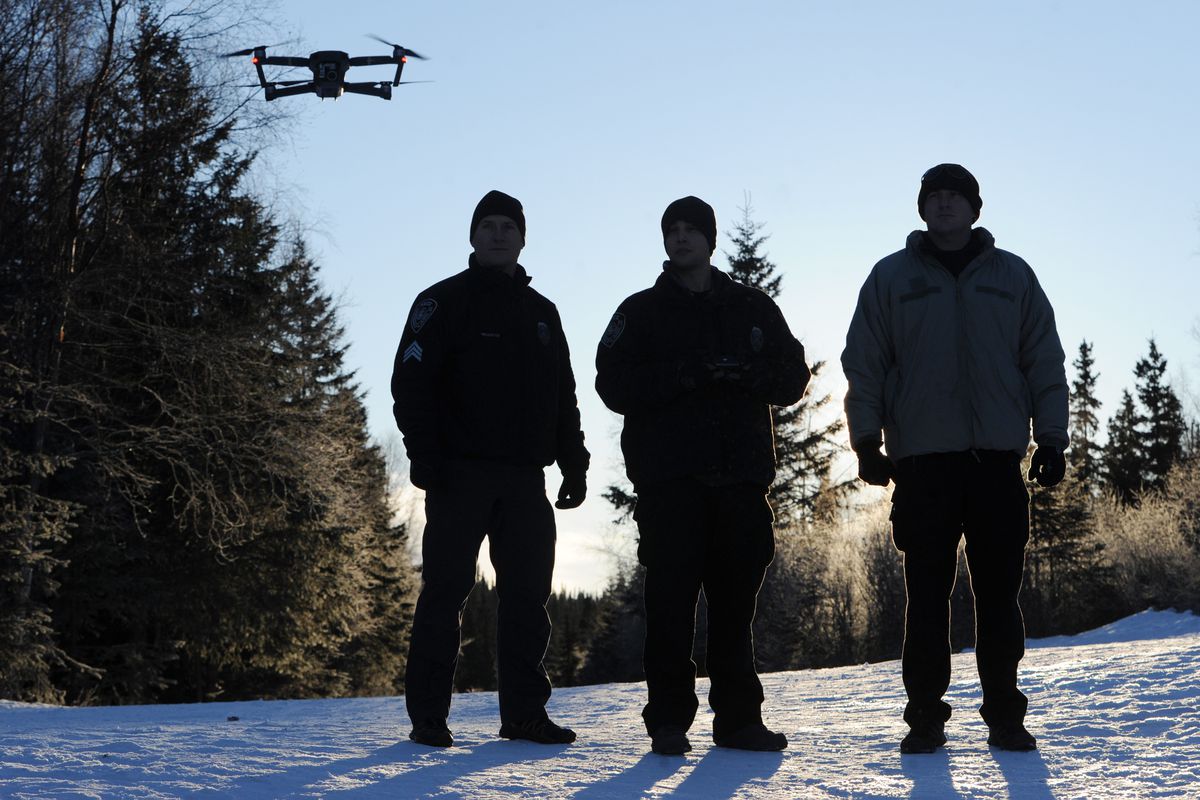 Ryan Marlow peered at his handheld screen, keeping his eyes peeled for a small, black dot.

For Marlow, who was flying a drone equipped with an infrared camera several hundred feet overhead, black meant hot. That hot spot, in turn, could indicate the presence of a live creature in the forest he was searching.

The drone pilot with Alaska Aerial Media had come to the crest of a Hilltop Ski Area cross country trail for two reasons: to train Anchorage police officers on how to fly drones, and maybe, if they were lucky, to find a loose cow.

The drone managed to pick up a number of black dots as it flew over the south fork of Campbell Creek: a skier here, a fat-tire biker there, a couple of dogs and the occasional splash of water reflecting the sun. None of them was the right dot.

None of them was Betsy, the rogue rodeo cow that has been eluding capture for more than six months.

The cow, which belongs to rodeo promoter Frank Koloski, has been spotted wandering the trails between Campbell Airstrip Road and Abbott Road since she escaped from the William C. Chamberlin Equestrian Center in June. Some people have tried to snap photos of her or coax her with food, but as of Tuesday, Koloski hadn’t caught up with her.

Sgt. Mark Huelskoetter, who leads the Technical Support Unit for the police department’s SWAT team, said Betsy’s elusiveness was an opportunity to add real-life practice to his team’s twice-monthly trainings. Normally, he said, the team doesn’t have much to look for.

“It’s a good training opportunity for our guys, since we’re going to be training anyway, to maybe get something good out of this — find this dude’s cow,” Huelskoetter said.

However, not even two different drones equipped with high-definition video cameras — one of which also had infrared imaging — succeeded in locating the cow. After about two hours of searching, the officers began packing up.

In a human search-and-rescue situation, the search would be more organized, Huelskoetter said. The officers would set up a grid to comb, for example, but even so, the police are still limited in what they can do with drones. By law, drones can’t fly beyond the pilot’s line of sight, nor can they fly above 400 feet, Huelskoetter said.

A few cross country skiers and fat-tire bikers curious about the officers' presence said they had heard about the cow but hadn’t spotted it themselves. Koloski, the cow’s owner, has asked anyone who spots the cow to call or text him at 907-748-7336.

Huelskoetter said it’s unlikely the department will use its drones again in the ongoing search for Betsy. The team has other equipment to train on, he said. If the cow is still loose in two weeks, he said it’s possible they may lend their services again, but “I doubt it.”