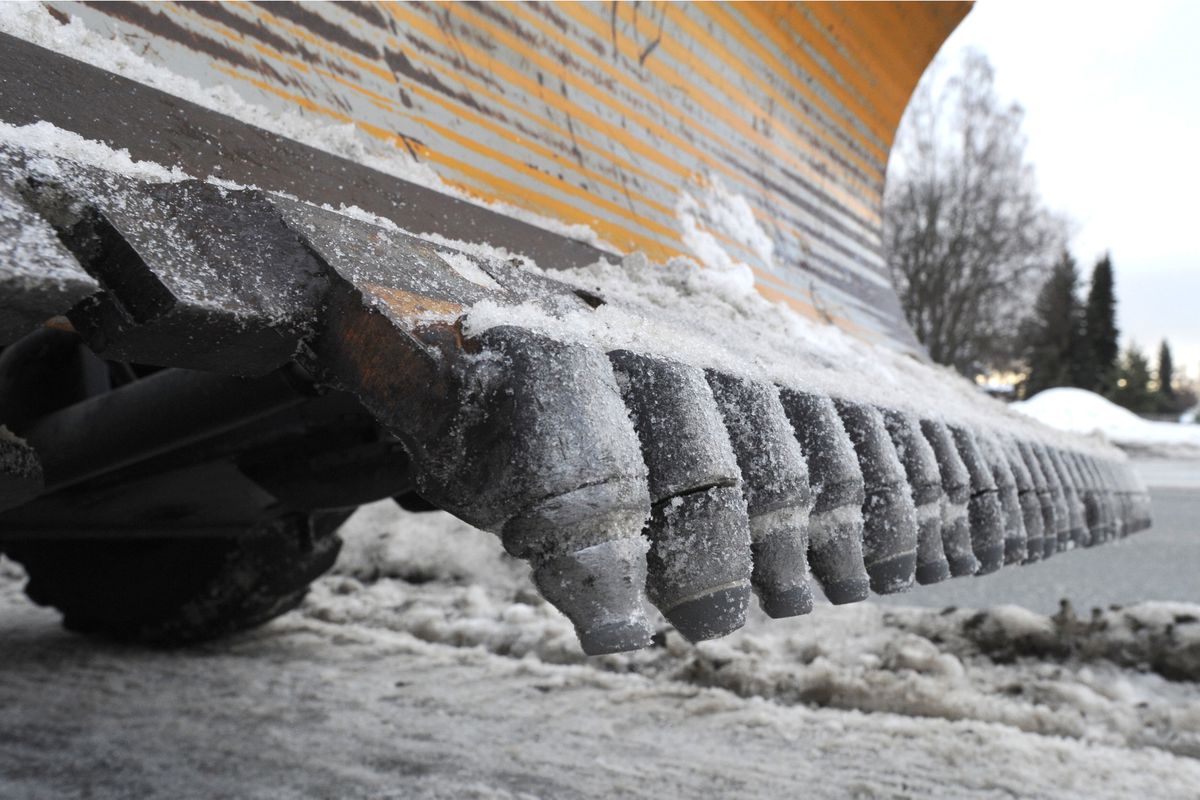 On city-maintained streets this week, sidewalk tractors have been out cutting grooves into ice. One rolled slowly Thursday along East Northern Lights Boulevard near Baxter Road.

The goal is to create a bit more traction for walkers, said Paul VanLandingham, the manager for street maintenance.

The city already keeps toothy blades called “shark edges” in its fleet maintenance shop. The blades usually attach to road graders. But recently, a few mechanics cut the blades and attached them to the bottom of plows on sidewalk tractors, VanLandingham said.

“Last week was pretty gnarly out there because it was so slick,” VanLandingham said.

The tactic is getting mixed results — and depends entirely on the temperature.

When it’s particularly cold, glare ice hardens on sidewalks and the equipment can’t cut through, VanLandingham said. If the temperature swings well above freezing, the water runs over the scratch marks and re-freezes, erasing the work.

“The one that’s killing us is 38 (degrees),” VanLandingham said.

Once grooves are cut in and it stays below freezing, that’s the best chance for short-term traction, VanLandingham said. That was the case Friday, he said.

In a normal winter, city sidewalk tractors work as snowblowers, VanLandingham said. But now, if the landscape is more ice than snow, the scratchers will go out. Four of the city’s 14 sidewalk tractors have been equipped with the metal edges, he said. It looks like a snowplow attachment on a pickup.

The responsibility for maintaining Anchorage sidewalks splits five ways. The Anchorage Downtown Partnership handles downtown; the city parks and recreation department does greenbelts and the area around the Delaney Park Strip; the state handles trailheads and state-owned arterials; and the city generally picks up city roads.

A big snowfall triggers a priority map that puts sidewalks lower on the list. The top priorities mirror transit routes.

The state, which has seen dramatic cutbacks in its snow maintenance budget in recent years, maintains major arterials, including C and A streets, Minnesota Drive and the section of Northern Lights and Benson boulevards that runs through Midtown.

State crews have not yet taken a similar ice-scratching approach, according to Shannon McCarthy, a spokeswoman for the state Department of Transportation and Public Facilities.

Neighborhood walkers also aren’t likely to notice a difference. Especially in older neighborhoods like Fairview, residential sidewalks were developed when there was less pedestrian traffic and a smaller population, VanLandingham said. The sidewalks are narrower than today’s standards, and the city doesn’t have plowing equipment that will fit, VanLandingham said.

The city also won’t sand sidewalks, VanLandingham said. All of it would all have to be cleaned up in the spring.

“The dust in this town would be incredible,” VanLandingham said.

Street maintenance has been looking at cities in the lower 48, including Minnesota, for how they handle ice, VanLandingham said.

But with the freeze-thaw cycles, it’s hard to know what to do, VanLandingham said. He said the scratching approach might be more sustainable if winter temperatures ever go back to “normal.”

“We’re trying to think outside the box as much as we can right now,” VanLandingham said.

How has it been, walking on Anchorage sidewalks this winter? Tell reporter Devin Kelly about your experiences at dkelly@adn.com.