For some Alaskans struggling with earthquake losses, recovery aid falls short of expectations 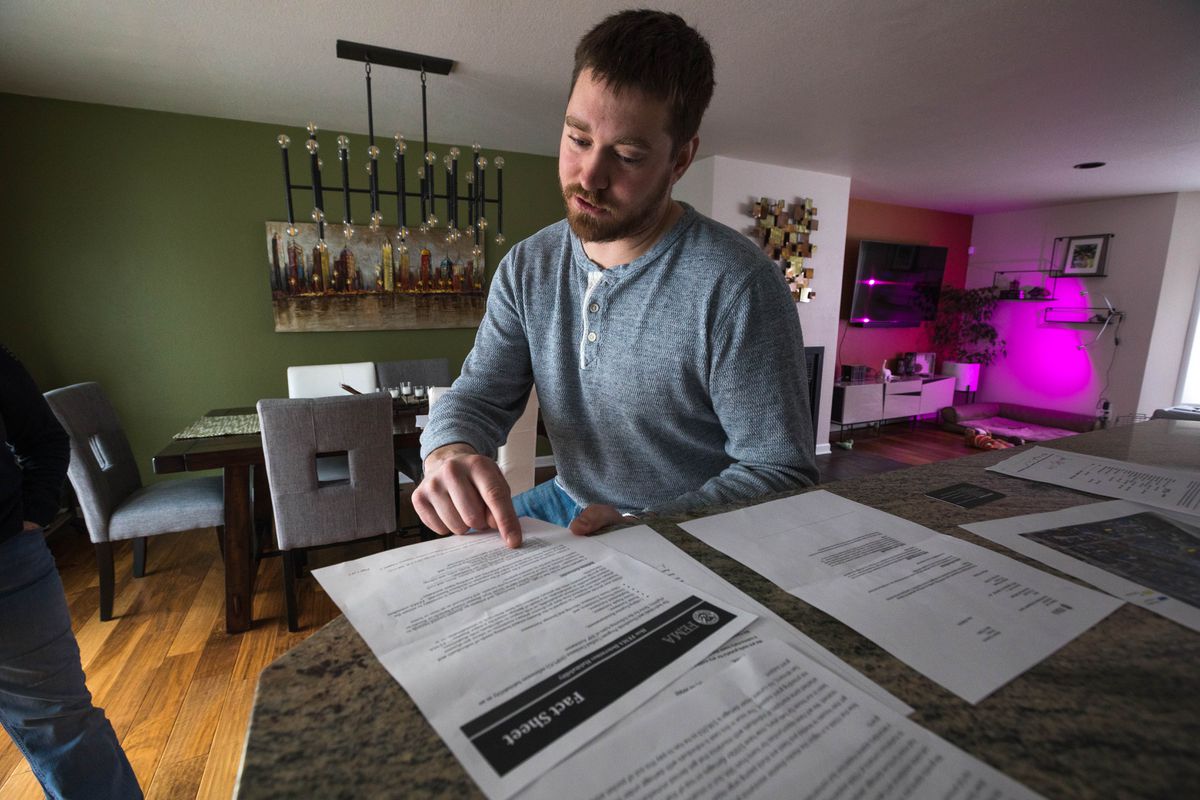 Some Southcentral Alaska homeowners with earthquake-rocked foundations, tilting walls and mounting repair bills after the 7.1 Nov. 30 earthquake say they’ve received far less disaster relief than they were led to expect and are now bracing for financial uncertainty.

As of Monday, the Federal Emergency Management Agency had paid nearly $6 million in disaster aid to about 2,600 households. That’s out of 5,200 cases that FEMA reviewed. A typical aid amount falls between $2,000 and $6,000, according to FEMA officials and interviews with homeowners.

That’s far short of the maximum of nearly $35,000 that some homeowners with serious damage say they expected.

Earthquake insurance is relatively uncommon in Alaska. FEMA, which rarely responds to earthquake disasters, says the aid will only cover minimal repairs to “make a home safe, sanitary and functional.” That includes a structurally sound exterior and interior, including the ceiling and floors, a March 1 fact sheet said.

A half-dozen homeowners interviewed by the Anchorage Daily News all reported serious structural damage. City engineers gave each a “yellow tag,” which means a home needs repairs before it can be lived in long-term.

The homeowners described the experience of applying for aid as confusing. Several said they were grateful for the public money they’ve received, but had expected to receive maximum aid from both FEMA and the state — and now appear unlikely to get either. Some now face bankruptcy or foreclosure.

It’s also been hard to know why award amounts have varied, homeowners say.

[Drained after the Southcentral earthquake, Alaska’s disaster relief fund is running out of money]

With a sunken foundation and tilted floors, Sand Lake resident Ryan Manzek thought he would qualify for the maximum federal and state disaster relief. His contractor’s estimate shows well over $200,000 in damage.

After two appeals, Manzek has received $6,000 in FEMA aid. He has since been told his only option was to apply for a loan from the Small Business Administration. If Manzek doesn’t apply for a loan, or refuses it, he will no longer be eligible for a separate pool of up to $18,000 in disaster relief through the state of Alaska.

FEMA officials say it’s rare nationally for the maximum amount to be awarded, which has led in other places to complaints of “reverse sticker shock.” The average amount of aid is in line with other major national disasters, including Hurricane Harvey in Texas and the Paradise wildfire in California, officials said. The agency has emphasized more recently that the government program only gets people back on their feet and is not a substitute for earthquake insurance.

Just five homeowners have received the full amount so far, according to Jack Heesch, a spokesman for FEMA in Alaska.

“You probably lost your house, to get the max grant,” Heesch said.

The program also isn’t meant to make getting a payout easy. A 1988 federal disaster relief law put strict rules in place to prevent fraudulent or improper payouts of taxpayer money.

Heesch said he would encourage homeowners to exhaust their appeals with FEMA. But appeals take time and energy that some say they don’t have.

One particularly tenacious homeowner, after weeks of emails to officials, substantially boosted her award. Helen Sharratt, whose Eagle River home experienced a collapsed chimney flue, foundation damage and a broken sewer line, initially received about $2,100 and spent several weeks sending emails to government officials and elected representatives to complain. Sharratt said she wasn’t asking FEMA to restore her home to its original state but estimated $60,000 in immediate safety issues.

On Tuesday, an additional $27,353 from FEMA popped up in Sharratt’s bank account. It came without a detailed explanation, and it wasn’t clear who made the decision, Sharratt said.

Sharratt said her training as a lawyer and persistence may have worked in her favor. She said it appeared others were also deserving of the higher award.

“I’m concerned with everyone who isn’t pushing as hard as I am,” Sharratt said.

‘It’s not for long-term habitation’

As of early March, building inspectors with the city of Anchorage had completed about 2,700 free structural assessments. Fewer than 1,000 remained. The inspectors have been posting colored tags — indicating the level of damage — on homes.

Nearly three-quarters of those inspected have been green-tagged, or declared safe to occupy, according to Don Hickel, the city’s lead structural inspector.

Some 682 buildings, however, had been yellow-tagged, restricting use. An additional 71 buildings had been red-tagged and legally declared unsafe.

A yellow tag, which Manzek and Sharratt were both given, means the home is habitable in the short term, Hickel said.

“But ... it’s not for long-term habitation. You’re going to have to repair it.”

The FEMA disaster response team has been in Alaska since early February and was running disaster centers and conducting inspections in Anchorage, Wasilla and the Kenai Peninsula. The agency contracts with private companies for inspections.

One of FEMA’s disaster recovery centers is tucked away in a once-bustling mall in Midtown, near a La-Z-Boy furniture gallery. On a Wednesday in late February, people were walking in, picking up referral sheets and visiting a series of booths.

Of roughly 200 FEMA employees deployed in Alaska to respond to the earthquake, Heesch, the FEMA public affairs officer, is one of the very few that lives in Anchorage. His home, near Valley of the Moon Park, sustained minimal damage in the quake, he said.

He said he preaches earthquake and flood insurance but doesn’t own policies for either, for the same reason as a lot of other people: “It’s too damned expensive, and I’m willing to run the risk.”

Heesch said his agency tries to manage expectations about the grant program. FEMA inspectors are trained to look for what the agency will help cover, he said.

Living in the home, Heesch said, is a big indicator the homeowner is not eligible for a large payout.

“If your house is still safe and habitable, then we can’t help it,” Heesch said. “We’re not insurance people.”

[Should you have had earthquake damage insurance on your Southcentral Alaska home? Not necessarily.]

FEMA covers basic facilities needed for a home to be habitable, including a toilet, roof, windows and doors, according to the March 1 fact sheet. The main questions are whether the doors are locked and the water, heater, electricity and hot water are all on, Heesch said.

As an example, Heesch said, FEMA won’t pay to fix a front door that won’t open. It’s a different story if the door doesn’t lock, he said, because that creates a safety problem.

Heesch said he could not explain the specific criteria FEMA inspectors use to assess damage. In interviews, homeowners described inspectors with tablets who checked off a series of boxes.

“There’s no hard and fast,” Heesch said. “In the end, it’s the opinion of the inspector whether he thinks a sunken foundation is safe or unsafe.”

Loans available, but not guaranteed

For homeowners with repair bills that exceed FEMA help, the U.S. Small Business Administration comes in. The federal organization, also known as the SBA, offers low-interest loans of up to $200,000 for homeowners and $2 million for businesses.

Of about 900 individual households that applied for the SBA loan, 284 have been approved, totaling nearly $15 million. Others are turned away because of credit, income or other factors. Thousands more were referred to FEMA but had yet to fill out an application.

For businesses, the SBA has so far approved 13 loans from 60 applications, totaling $1.2 million.

A disaster assistance program run through the state of Alaska, meanwhile, has been effectively put on hold. In the first two months after the earthquake, the program was heavily advertised. The state paid $314,000 to 24 households that reported major damage.

The payments stopped Jan. 29, after President Donald Trump declared a major disaster declaration for Southcentral Alaska. Now the state is waiting for homeowners to exhaust the federal options first, said Jeremy Zidek, spokesman for the Alaska Division of Homeland Security and Emergency Management.

Homeowners with earthquake damage must apply for a loan with the Small Business Association and be turned down before being found eligible for state aid, Zidek said.

“We realize people don’t want loans, but that is how our plan works here in Alaska,” Zidek said. The aim is to not pay twice for the same service, he said.

The process of navigating dual disaster aid programs at different levels of government has sown confusion among earthquake victims. Multiple homeowners reported that state inspectors told them early on they would be recommended for the maximum state aid of about $18,000, only to be referred to FEMA, given a few thousand dollars and then directed to a loan.

Homeowners also felt FEMA’s standards for “safe and habitable” were open to interpretation.

Sharratt, in Eagle River, said she was incredulous at an email from a state official. The email said the grant money aimed to help survivors “make their homes livable” while looking for other funds.

“That is exactly what most of us who have proven we have substantial structural damage to our damaged foundations and collapsed, gaping walls were led to expect,” Sharratt wrote in an emailed response, which she provided to the Daily News.

Others said the FEMA inspections did not appear to be experienced in assessing earthquake damage.

Leslie Dickson bought her duplex near Lake Hood more than a decade ago. It was built in 1982 and backs up to a bog. The foundation sank in the earthquake and her sewer line broke. She got a yellow tag, and now has a few inches separating columns in the house from the floor and blankets and cardboard boxes keeping the cold air out of the garage.

Her first FEMA inspector was from Florida. According to Dickson, the inspector carried a tablet with a checklist, and kept referring to “the storm.” Dickson was awarded $2,400, which she planned to appeal.

In Sand Lake, 72-year-old Patti Bogan got about $12,000 from FEMA. That’s less than half of what it cost to fix a sewer line that broke in the earthquake, Bogan said. She and her partner live on a fixed income and are also confronting costs associated with a sunken foundation.

Eugene Cho, 31, stayed with his brother after the quake but moved back into his Jewel Lake home after a series of break-ins in empty homes in his neighborhood. About a dozen homes were hit with very similar damage, particularly sunken foundations, Cho said.

An engineer gave Cho a yellow tag and wrote in a report that it wasn’t safe to live in his house long-term without repairs.

Then, a few weeks later, FEMA told him he wasn’t eligible for aid because he was living in the home.

Nearby, Mandy Robison’s house sank unevenly and is slanted. Her family did get FEMA aid, though it amounted to less than 5 percent of the estimated damage, Robison said. Like Cho, Robison and her husband decided to move back in despite a yellow tag and safety concerns. They have a child and pets, Robison said. The couple is working on their first appeal.

Robison applied for an SBA loan last month, but was told it might only cover half the estimated damage.

Cho and Robison in Jewel Lake, and Manzek and Bogan in Sand Lake, have been helping organize neighbors. There are now Facebook groups, email chains and Nextdoor threads. A Sand Lake block party was even in the works. Cho and Robison, along with their neighbors, pushed for their street damage to be put on the city road bond in the upcoming Anchorage election.

“We’ve all come together a lot since the earthquake,” Robison said. “It’s a crappy situation to bring us all together ... but we’re all very good friends now.”

In an email chain with other homeowners this week, Sharratt — the homeowner who successfully boosted her award — said her appeal letter quoted FEMA’s eligibility definitions. Then she just kept fighting, she said.