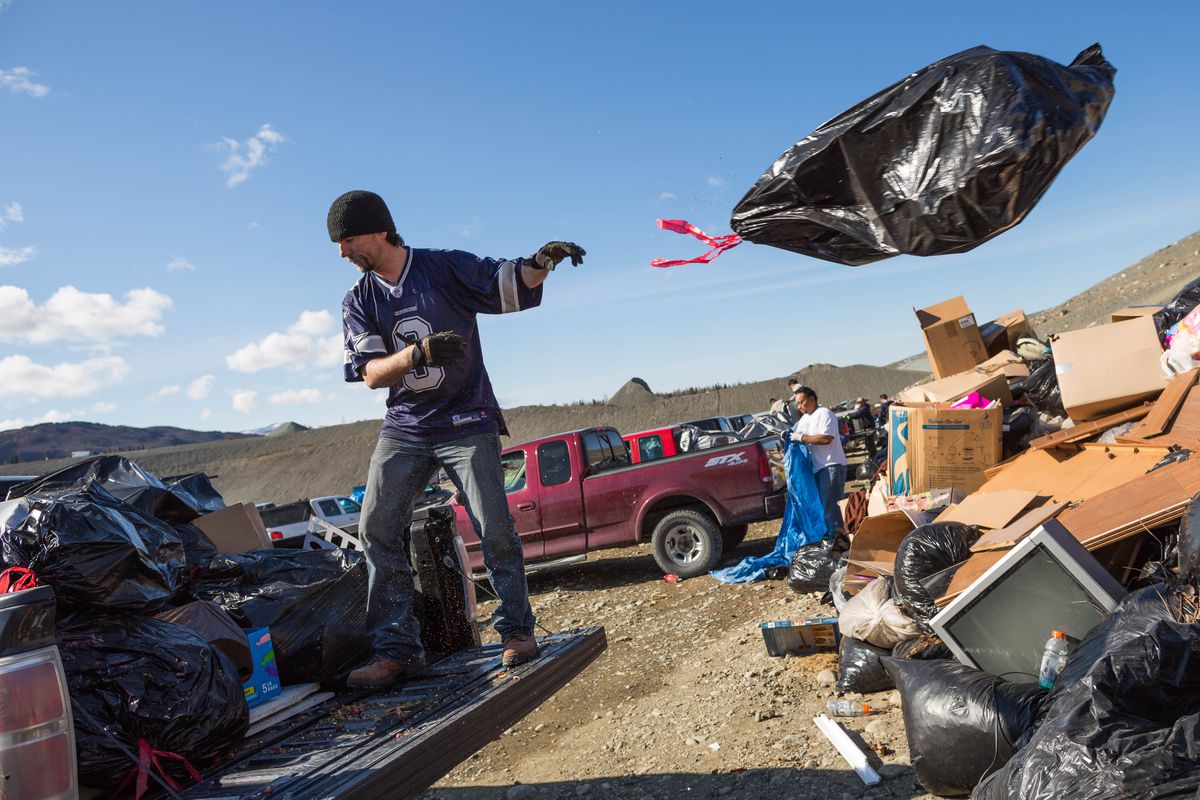 Anchorage resident Rick Teel unloads a pickup full of trash at the Anchorage landfill on the first of two free dump days in 2015. Approximately 5,000 loads are expected this year over the two days. (Loren Holmes / ADN archive)

Anchorage resident Rick Teel unloads a pickup full of trash at the Anchorage landfill on the first of two free dump days in 2015. Approximately 5,000 loads are expected this year over the two days. (Loren Holmes / ADN archive)

Anchorage will host Free Dump Days the next two Saturdays for residents looking to get rid of their spring-cleaning garbage, the city’s Solid Waste Services announced Thursday.

Anchorage residents can drop off trash loads for free at the Anchorage Regional Landfill in Eagle River between 8 a.m. and 5 p.m. April 27 and May 4. The Girdwood Transfer Station will also accept trash for free on the same days between 10 a.m. and 5 p.m.

The Central Transfer Station in Midtown Anchorage will be closed on those days.

Solid Waste Services is expecting to see between 2,000 and 3,000 vehicles drop off 1,100 to 1,200 tons of trash this year, said recycling coordinator Suzanna Caldwell.

Loads must be less than 1,000 pounds and no larger than can fit in a standard pickup, Solid Waste Services said. That means no oversize trailers or U-Hauls will be allowed. Loads must be fully secured.

Residents bringing loads much larger than that will have to pay the usual fee of $61.50 per ton, Caldwell said.

Fees will apply in a few other special cases, as well: Residents disposing of an appliance that contains freon, a cooling agent found in refrigerators and air conditioners, will need to pay a $20 per item fee. There will also be a fee for people bringing 40 pounds or more of hazardous household waste.

The landfill will also be accepting orange trash bags for free during the workweek from volunteers picking up litter as part of next week’s Citywide Cleanup, Caldwell said.

Solid Waste Services is asking residents to take their recyclables to the Anchorage Recycling Center at 6161 Rosewood St. on those days to relieve some of the burden on the landfill, which becomes very busy on Free Dump Days, Caldwell said. Dropping off trash takes about 30 minutes on average.

“That said, if the weather is nice — which it looks like it will be — we expect more traffic so we just encourage people to be patient and know that we will get them in and out as quickly as possible,” Caldwell said in an email.