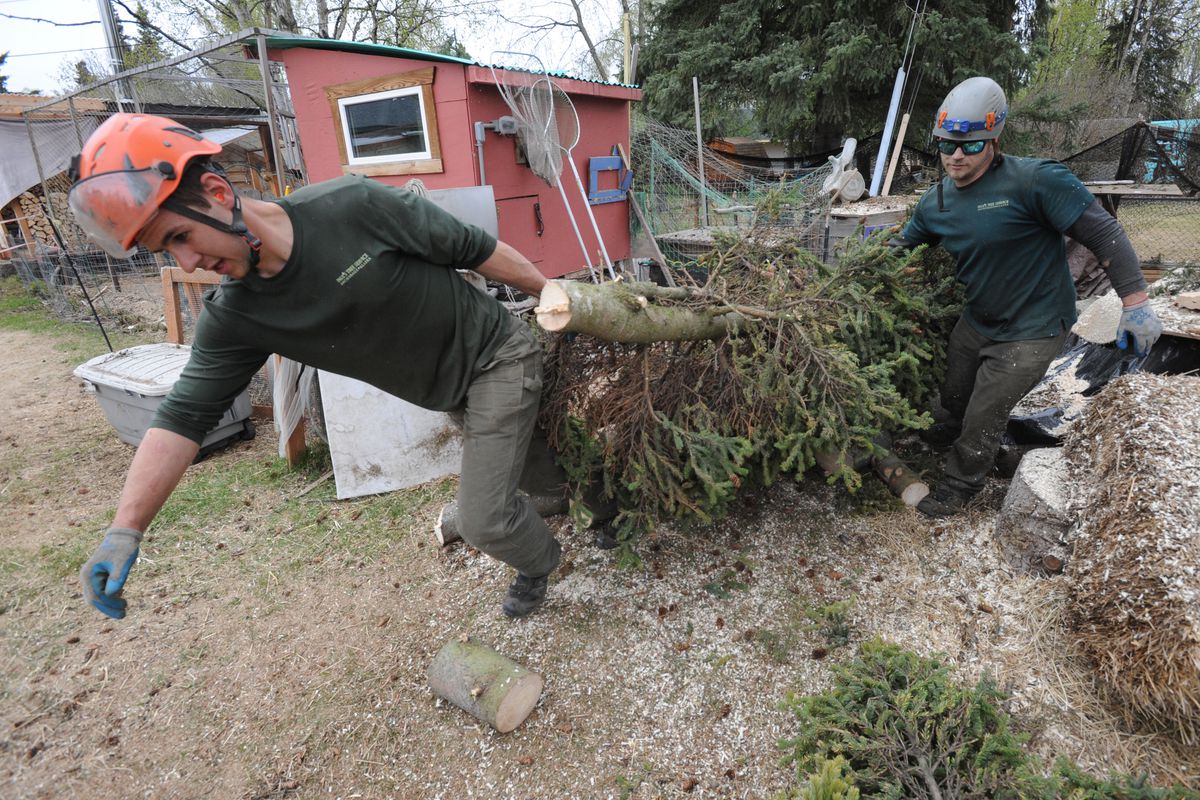 Hans Koeneman and Tyler Valeu with Paul's Tree Service carry the top of a white spruce infested with bark beetles to the chipper on Thursday, May 9, 2019. (Bill Roth / ADN)

Hans Koeneman and Tyler Valeu with Paul's Tree Service carry the top of a white spruce infested with bark beetles to the chipper on Thursday, May 9, 2019. (Bill Roth / ADN)

A spruce bark beetle infestation that began a few years ago in Southcentral Alaska is spreading in Anchorage, taking out hundreds of acres of trees, arborists and forest scientists say.

“We’re cutting them down every day,” said Mike Post, an arborist who owns Tall Trees tree service. “We’ve cut hundreds of them down, probably in the thousands in the last three years."

The U.S. Forest Service recorded 18 acres in the city with beetle damage in 2017. That number grew to 1,500 in 2018, indicating a growing urban infestation, according to Stephen Burr, a forest service entomologist.

Anchorage’s damage, however, is a small fraction of the Southcentral total, according to forest service numbers. The Matanuska-Susitna Borough had the bulk of the infested acres, 504,000 in 2018. Numbers in Anchorage and Mat-Su are likely to increase.

“Unfortunately, these outbreaks can occur for 10 years,” Burr said.

Spruce beetles are native to Alaska, and big tree-killing infestations tend to run in cycles, he said. The last major one in Southcentral was in the 1990s and damaged 3 million acres, most heavily on the Kenai Peninsula. In the Anchorage Bowl, 25,000 to 30,000 acres were damaged, Burr said.

[Voracious spruce bark beetles are back in force in Southcentral Alaska]

Arborists report pockets of infestation across the city, but the worst-hit areas appear to be established neighborhoods with big, older spruce trees, especially in Turnagain and Spenard.

“Old, old spruce trees that survived the last round (of beetle infestation) are the kind that are succumbing,” said Paul Guzenski, owner of Paul’s Tree Service, who was cutting trees in Turnagain on Thursday. “We’ve been clear-cutting some lots in Turnagain. ... It definitely changes the character of the neighborhoods.”

Guzenski tells customers not to prune big trees until mid to late summer because the fresh sap can attract beetles. And if people cut down an infected tree, he recommends they de-bark it before stacking it as firewood.

Over on Lois Drive in West Anchorage, homeowner Barbara Diamond lost eight trees last summer. A neighbor was having trees cut and the arborist noticed her trees had beetles, she said. She tried to save two by spraying, but the needles turned brown and they had to be cut down.

"We counted the rings on one of them and there were 65,” she said. “The fact that they were so old, it actually chokes me up.”

Her house was once so surrounded in trees she called it “the little cabin in the woods,” she said. No longer. She’s still working on the landscaping in the areas where the trees used to be.

“My yard looks like a war zone,” she said.

Beetles fly and can also be carried on people. No studies link these current beetle infestations to climate change, Burr said. But warmer summers accelerate their life cycles, causing more to be born in a shorter time, and warmer winters kill fewer of them, bolstering populations.

The only way to prevent beetles from overtaking a tree is to spray. The cost of spraying is a few hundred dollars. Removing a big tree can range from $600 to over $1,000, depending on whether the tree service grinds the stump and mends the landscaping, Post said.

“(Spraying) is a lot less expensive, and it lasts two years,” Post said.

Leaving a dead tree in a yard is a fire risk, he said.

Post said the last time there was a big infestation, many people sprayed only the bottoms of large trees, but beetles ended up in the tops and then he had to cut them down. He recommends giving trees a comprehensive spray, he said.

The pesticide used to spray for beetles does kill other insects, including bees, Burr said, but if it is applied correctly, the impacts on other species are limited. The current outbreak is allowing the forest service to test other types of beetle management, he said, including an injectable pesticide and a pheromone that can be applied to trees that tells beetles a tree is already occupied and not a good candidate for infestation.

The Cooperative Extension Service is completing a survey of Anchorage public land affected by beetle kill, said Jessie Moan, who works in forest health and integrative pest management at the service. She has also observed that older West Anchorage neighborhoods are losing a good number of trees, along with pockets on the Hillside. Beetle-kill trees have also started to show up around public parks and trails, she said.

“(The beetles) are always present. We do see some activity every year from them," she said. "Just not on the scale we’re seeing it now.”