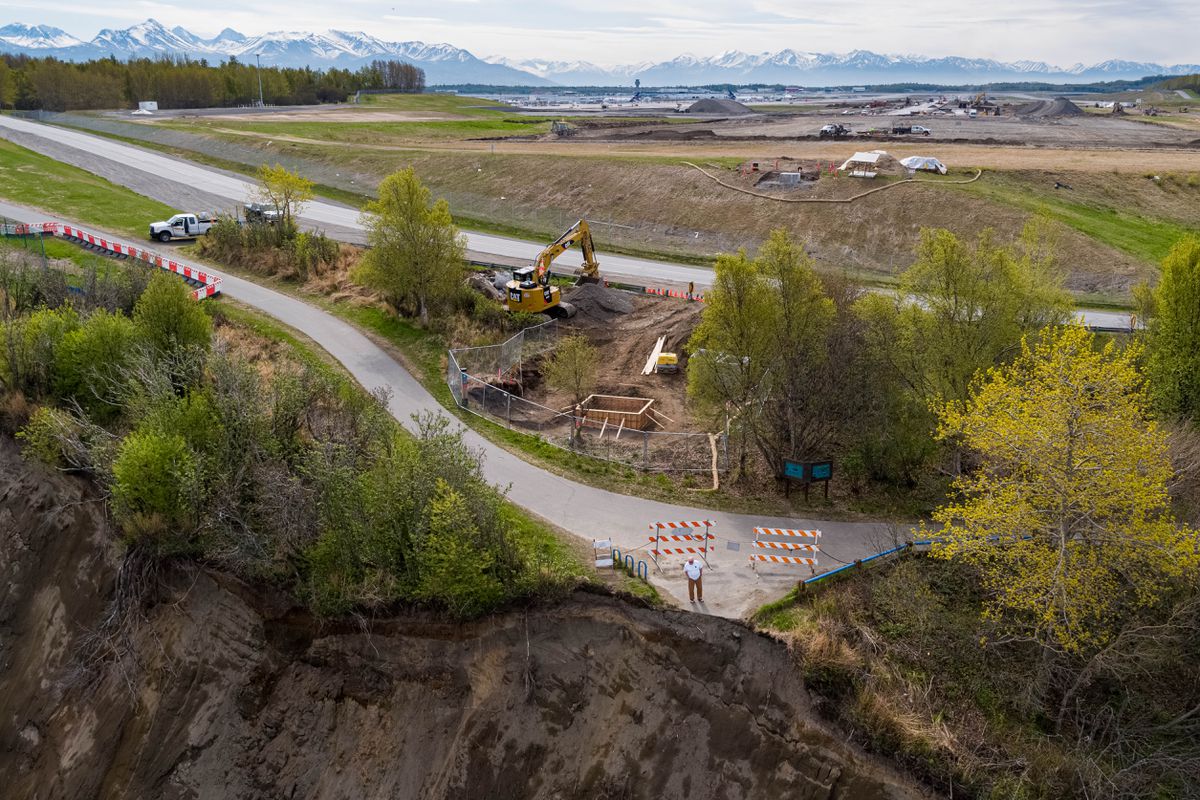 A man looks over the edge of the bluff at Point Woronzof on Tuesday, May 14, 2019. The bluff has been eroding for many years and is encroaching on the popular Tony Knowles Coastal Trail and nearby road. The Ted Stevens Anchorage International Airport, behind, is expanding the runway and adding additional navigation lights. (Loren Holmes / ADN)

A man looks over the edge of the bluff at Point Woronzof on Tuesday, May 14, 2019. The bluff has been eroding for many years and is encroaching on the popular Tony Knowles Coastal Trail and nearby road. The Ted Stevens Anchorage International Airport, behind, is expanding the runway and adding additional navigation lights. (Loren Holmes / ADN)

Erosion is eating away at Point Woronzof, a popular lookout spot along a bike trail at the foot of the main runway at Anchorage’s international airport. Public officials are getting nervous.

But a fix is likely years off at this point, officials say, and there isn’t a clear plan for dealing with worsening erosion in the meantime.

City park maintenance staff set up simple barriers a few weeks ago after noticing how close the cliff had come to the Tony Knowles Coastal Trail, said Josh Durand, the city parks superintendent. The bluff is a popular local spot for watching sunsets and planes. Durand said it isn’t safe for people to go near the edge.

The state installed a fence a short distance north along the bluff a few years ago, after officials also determined it was unsafe.

At this point, a federal study to calculate the erosion rate and come up with fixes is years away. And any project to fix it would come with a big price tag that local or state government would have to help pay, officials said. Next to the Coastal Trail runs Northern Lights Boulevard, an access to a water treatment plant; behind, there’s the runway for Ted Stevens Anchorage International Airport.

There are no immediate short-term plans for detours or additional fencing.

Airport officials have long tracked erosion at Point Woronzof, said Eland Conway, development specialist for the airport. The actual job of studying and fixing it, though, has fallen to the Army Corps of Engineers, the federal engineering, design and construction management agency under the Department of Defense. The agency can help local or state government with issues related to water resources and coastal storm erosion.

The Corps’ involvement allows the local authorities to split the cost of erosion repairs with the federal government.

Cindy Upah, the chief of planning for civil works with the Army Corps of Engineers in Alaska, said her agency considered an erosion study at Point Woronzof in 2015 but decided it wouldn’t work out financially under an existing erosion control budget.

The agency has since asked for a bigger budget to cover a three-year study and future repairs, Upah said. The study, which would cost about $3 million, would likely come up with an erosion rate and compare different options for fixes, Upah said.

In particular, the study would be focused on protecting the airport, Upah said. But she said the Coastal Trail and Northern Lights Boulevard would be included too.

It isn’t clear whether the money would come through, since the project would compete with other national priorities and also require buy-in from the state or local government, Upah said. Either way, the soonest the study could start would be October 2020. Then it would take a few more years to design and build the project, Upah said.

If signs of imminent danger emerged, the Corps could request emergency shoreline erosion protection for the area, Upah said. A similar request already exists for a part of the Coastal Trail bluff further north.

Army Corps engineers will visit the site this summer to assess whether the 7.1 earthquake in November 2018 made the situation worse, Upah said.

In the meantime, Upah said she would advise staying away from the cliff.

“It may look stable while you’re standing on top, but you don’t know how it’s been undercut,” Upah said.