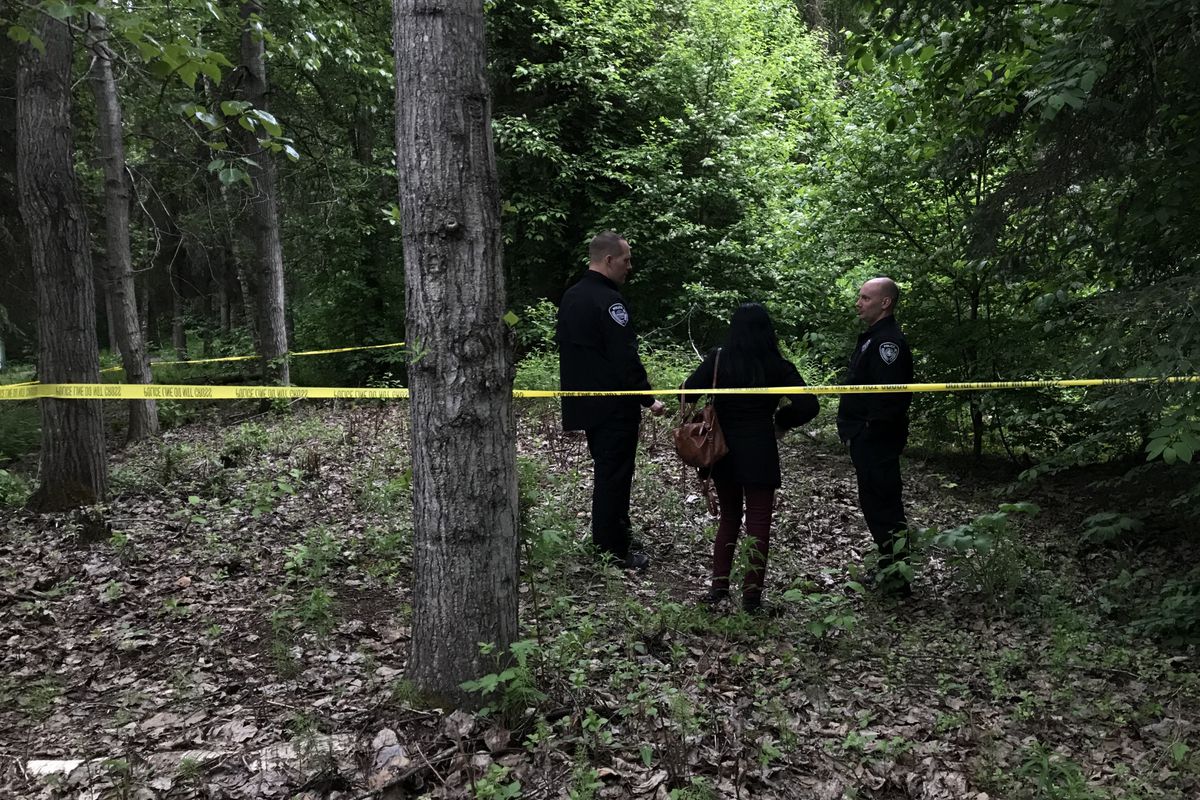 Anchorage Police officers and Assistant District Attorney Saritha Anjilvel near the scene of a shooting that occurred in the woods off the Chester Creek Trail near Sullivan Arena, which left one juvenile dead and another severely injured Sunday evening, June 2, 2019. (Bill Roth / ADN)

Anchorage Police officers and Assistant District Attorney Saritha Anjilvel near the scene of a shooting that occurred in the woods off the Chester Creek Trail near Sullivan Arena, which left one juvenile dead and another severely injured Sunday evening, June 2, 2019. (Bill Roth / ADN)

A juvenile male is dead and another severely injured after a shooting Sunday evening in the woods off the Chester Creek trail in the area of the Sullivan Arena, police say.

Someone called police at 6:25 p.m. to say they heard gunshots in the area. A short time later, someone else called to say they had been shot in the woods, police said in a Sunday evening alert.

Officers found two juvenile males deep in the woods, “very far off the trail system,” Thim said. Both had been shot multiple times, he said.

One of them was dead, police said. The other was taken to a nearby hospital with life-threatening injuries, police said.

Police shut down trail access Sunday evening near 20th Avenue and C Street to investigate the shooting. Yellow tape was stretched across groves of trees.

It isn’t yet known what the juveniles were doing so deep in the woods, Thim said. He said police do not suspect a public safety threat.

Harrison Bedell was playing baseball at the Kosinski Baseball Fields off A Street when he and other players heard “five to seven” shots in the woods to the south of the field, he said. At first the teams kept playing, he said.

“We knew what it was, but to be honest it’s not the first time we’ve heard it in that area. We didn’t stop (the game) until the cops came, because it was a pretty heavy response,” Bedell said.

About 15 minutes after they heard the shots, the players heard “cops, a lot of cops” as well as a firetruck and ambulance, Bedell said. Some of the emergency vehicles pulled off A Street onto the Chester Creek Trail, he said.

Bedell plays with the Anchorage Adult Baseball League, and said he’s had games on the Kosinski Baseball Fields about three times a week for the past six years. He’s heard gunshots in the area about once a summer, he said, but this was the biggest emergency or law enforcement response he’s seen.

Thim urged anyone who heard the shooting or who may have information about the incident to come forward and speak with investigating officers.

“It’s a pretty popular area, it’s summertime, it’s light out,” Thim said. “(People) may not even think they saw something that’s related to it, but let us make that decision.”

This is the second incident involving gunfire on the Chester Creek Trail in two days. On Saturday, after receiving reports of gunshots in a park along the trail near Lake Otis Parkway and East 20th Avenue, police chased down and arrested a man with a handgun. The man, Timothy Wood, had a felony record and an outstanding warrant, police said. Wood told police that he threw his gun into the mud by the creek while running away from police, but it was never found.

Anyone with any information can call 911 or give an anonymous tip by calling Crime Stoppers at 907-561-STOP.