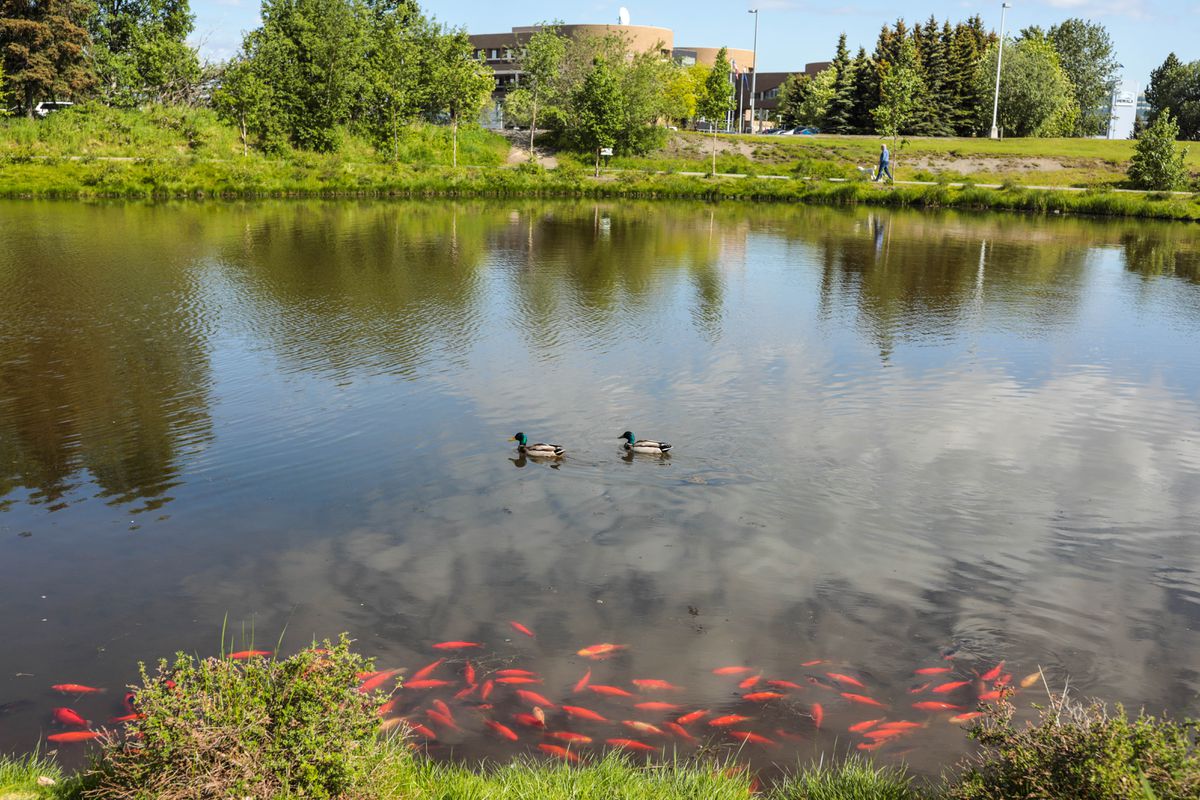 For months, the murky water of Cuddy Pond in Midtown Anchorage has been home to dozens of bright orange, white and red goldfish.

The fish, probably former aquarium pets, are an example of an alarming trend in Alaska’s waterways, officials say: People are putting fish and other marine life where they’re not supposed to be.

In the past few years, officials have documented largemouth bass in Sand Lake in Anchorage, crayfish in Kodiak, northern pike around Southcentral Alaska and red-ear slider turtles in Anchorage lakes and creeks.

Then there are the Cuddy Pond goldfish.

“This is a real clear example here in the heart of Anchorage -- here’s all these goldfish, over 150 of them I counted last week, swimming around,” said Krissy Dunker, an invasive species research biologist for the Alaska Department of Fish and Game in Anchorage.

Dumping non-native fish in Alaska’s waterways is illegal. The penalties include a criminal misdemeanor charge and a $10,000 fine.

The penalties reflect severe ecological and financial consequences when it comes to invasive species, Dunker said. Northern pike, for example, have decimated salmon and trout populations in Southcentral Alaska, and have cost the state and federal government millions of dollars.

While eradicating a school of the sport fish muskellunge, or “muskie,” from the Kenai Peninsula, the state worked with geneticists in Wisconsin and Minnesota to trace the fish back to the Midwest, Dunker said.

Fish and Game officials have been aware of the goldfish in Cuddy Pond since at least spring 2018. The popular aquarium pets, a domesticated carp originally bred in China, have also gained a reputation as one of the worst invasive aquatic species in the world.

The fish have been found in several other spots in Anchorage, including Jewel Lake, Cheney Lake and Taku Lake, though there’s no evidence they were reproducing, Dunker said. A population was also found in the small Southeast Alaska town of Gustavus.

This spring, Fish and Game employees used nets to corral and capture a handful of goldfish from Cuddy Pond. The fish, tiny in captivity, had grown to between 8 and 10 inches long.

The fish were taken to a pathology lab, where they are being tested for parasites or disease, Dunker said.

The plan for removing the fish entirely is still in the works. In 2018, Fish and Game took a boat out on Cuddy Pond that was outfitted with electroschock equipment, which sends pulses through the water to stun fish and make them easier to catch. Those pulses ended up driving the goldfish deeper into the water, so it wasn’t very effective, Dunker said.

A big question is whether the fish are reproducing, Dunker said. She said officials would also like to know where the fish came from.

Anyone with information about the goldfish or any other invasive marine species can call 1-877-INVASIV or report observations online at the Department of Fish and Game’s website.

It’s generally very helpful to hear from the public when an animal doesn’t look like it’s in the right place, Dunker said.

It isn’t clear yet how much the goldfish have harmed Cuddy Pond. Goldfish can carry diseases and bacteria that harm the ecosystem and other marine animals. Tank water can contain similar contaminants, Dunker said.

But the pond is part of the Fish Creek system, which runs through Spenard and Turnagain and into Cook Inlet. Most of the creek is in culverts, and Jay Stange, president of the Spenard Community Council, and other advocates have been pushing to “daylight” the creek -- bring it out into the open.

Dunker said she’s been trying to learn more about the creek system. Any plans to restore Fish Creek make it even more important to remove the goldfish, she said.

The goldfish are one piece of an odd ecosystem surrounding Cuddy Park. The park is also home to large flocks of ducks and geese, which in some cases overwinter there because of an endless supply of food from passers-by.

The Anchorage Waterways Council has pleaded with residents to not feed the birds there, saying that while people have good intentions, it’s harmful for the birds.

A similar rule goes for “freeing” aquarium pets, Dunker said. She said it’s more humane to euthanize an unwanted pet fish than to release it into the wild. Many aquarium pets are adapted to warmer water and are likely to starve in the winter, she said.

“People think they’re doing something kind for the pet, but you’re actually causing it to suffer,” Dunker said.

At least one specialty fish store in Anchorage will take in unwanted fish pets.

“We will always take in fish, no questions asked,” said Cody Hall, a manager at Alaska Coral and Fish, which is on West Potter Drive in the Taku-Campbell area.

The store takes fish of any size, Hall said. He said the hope is to find them new homes.

“We’re sort of like the pound for fish tanks,” Hall said.