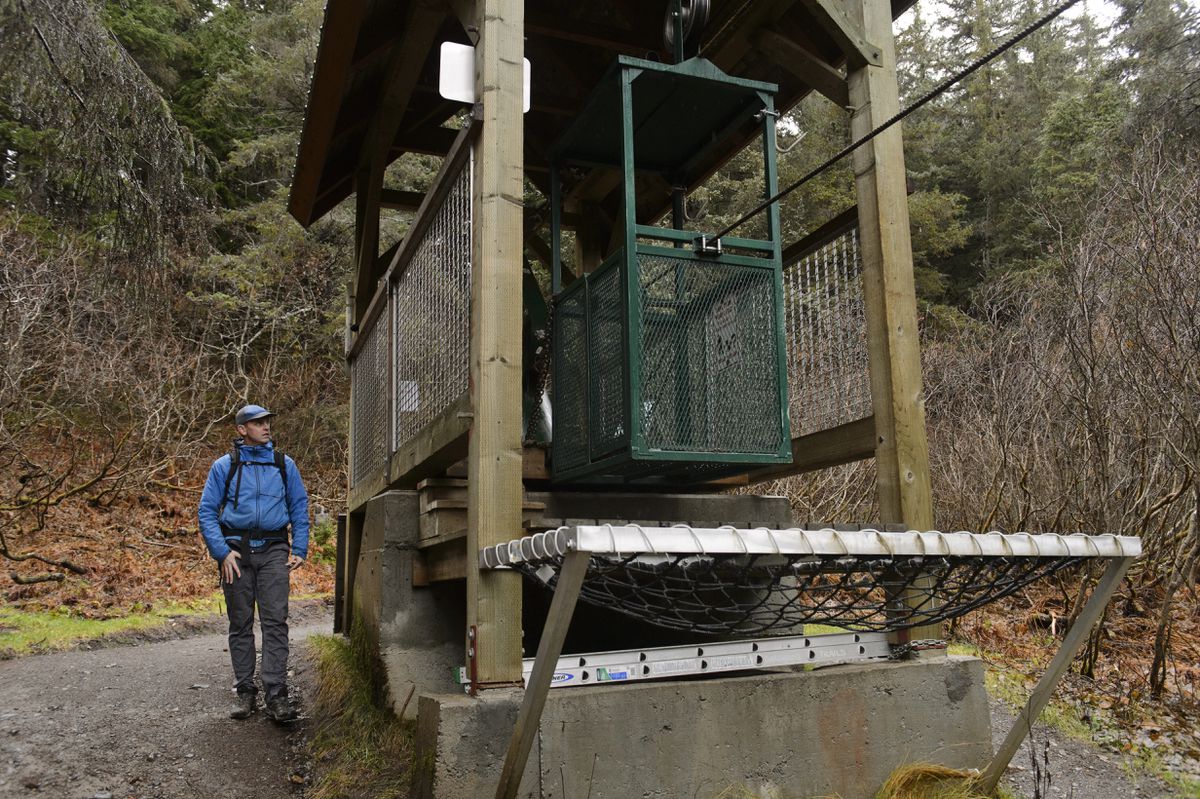 Girdwood Valley Service Area Manager Kyle Kelley is working with the Girdwood Trails Committee to come up with recommendations for the hand tram on the Winner Creek Trail system. (Marc Lester / ADN)

Girdwood Valley Service Area Manager Kyle Kelley is working with the Girdwood Trails Committee to come up with recommendations for the hand tram on the Winner Creek Trail system. (Marc Lester / ADN)

The future of the popular hand tram on Girdwood’s Winner Creek Trail is uncertain after two people fell from the tram’s platform this summer, leaving one of them dead and the other badly hurt. Following the accidents, the tram was closed indefinitely.

The Girdwood Trails Committee is talking about whether to recommend reopening the hand tram at all. If it does reopen, the group is weighing what improvements need to be made, such as bigger safety nets to new railings.

The tram — first opened in 2001 as a way to connect trails for a handful of hikers — has grown into a beloved, busy attraction for the community south of Anchorage, Kelley said.

But with more users comes the need for more maintenance and the potential for more risk, he said.

“It’s like a pool with no lifeguards on duty and you hope people read the signs and use their best judgment,” Kelley said.

The tram operates on a pulley system. To use it, people load into a metal cart and pull themselves roughly 200 feet across a gorge, gliding more than 100 feet above Glacier Creek.

Some use the tram as a connection to continue hiking on the windy and woodsy Winner Creek Trail between Crow Creek Road and the Alyeska Resort. Some also hike the trail simply to ride the tram back and forth. Stop and take a selfie over the rushing waters of the creek, one travel website recommends.

“We had no idea the hand tram was going to become this popular,” said Carolyn Brodin, trails committee chair and longtime Girdwood resident.

The U.S. Forest Service manages the Winner Creek Trail, but the land surrounding it is owned by Heritage Land Bank, under the Municipality of Anchorage. The Girdwood Valley Service Area — within the municipality with certain government powers — owns the tram itself, Kelley said.

Volunteers on the trails committee originally spearheaded the project, he said. Before the tram, hikers would cross the creek on foot or they’d shimmy across suspended cables over the gorge or use a carabiner to clip in and slide across, Kelley said.

The hand tram, he said, “was meant for those who were more of the hearty adventurists.”

At the time the tram was installed, the trail was full of roots and mud. It has since been improved, and that has made it inviting to more hikers. On a summer afternoon, it’s not uncommon to find lines to ride the tram.

“It wasn’t originally designed to handle the amount of traffic it gets, so we’re just trying to figure out its future,” Brodin said.

While there’s no official count of how many people use the tram daily, Kelley said, a volunteer in July 2017 tallied 248 people and three dogs boarding the tram over two four-hour periods. About a third of them immediately turned around and rode back.

On a recent weekday afternoon, Bill and Bruce Kakel hiked the Winner Creek Trail with friends visiting from out of state. They often bring visitors on the trail to the hand tram. It’s so unique, and the trail is so accessible, Bruce Kakel said.

Inside of Alyeska Resort, Tylor Acheson, who was visiting from Anchorage, described the tram as “a little sketchy.”

“But that’s what makes it fun,” he said.

For Girdwood, the tram’s popularity has come with a price.

The Girdwood Valley Service Area spends between $2,500 and $5,000 on the tram each year, funded by property taxpayers, Kelley said. At least every year it replaces the rope. At least every other year, a helicopter picks up the tram cart and hauls it away for inspections.

In the tram’s 18 years in operation, Kelley said, he knows of three accidents.

In 2011, a child tumbled off the tram platform. The child lived, he said, and the fall prompted the installation of safety nets and railings.

Then this June, a 57-year-old Anchorage resident was standing on the lower platform and helping pull the rope to move hikers across the gorge. But at some point, while holding on to the rope, he was pulled off the platform and past the safety net. He fell 50 feet to his death, according to police.

A similar scene played out two months later, and the person was badly injured, Kelley said.

The tram has remained closed since then.

It normally closes each year by the end of October and reopens around Memorial Day, Kelley said.

The Girdwood Trails Committee is currently waiting on estimates of how much it would cost to add new railings to limit access to the lower platform and install larger safety nets.

Other ideas have included replacing the hand tram with a bridge or hiring tram operators, but both would require a significant investment, Kelley said.

The committee will ultimately forward its recommendation to the Girdwood Board of Supervisors, which will work with the municipality on a path forward, Kelley said.

Assemblyman John Weddleton, whose district includes Girdwood, said he trusts the community to come up with good, reasonable solutions.

“So I’ll wait and see what they say,” he said. “I mean safety is critical but, boy, people love that hand tram.”