A lot has happened over the past year at Alaska Psychiatric Institute. Here’s where things stand now. 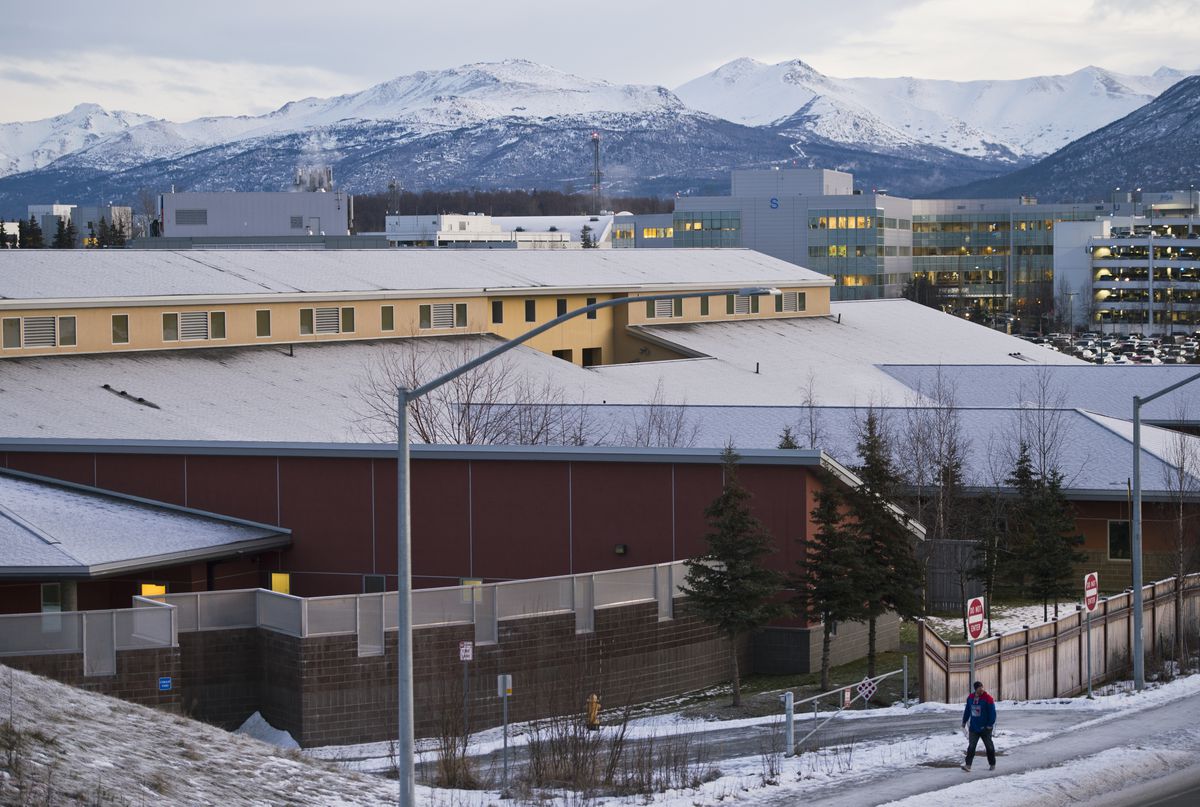 Between a crisis that threatened the hospital’s ability to operate and an unprecedented state move to turn over management to a private corporation, the Alaska Psychiatric Institute has been in the spotlight this year.

Here we attempt to answer your questions about what’s happened recently at the only state-run psychiatric hospital in Alaska, and where things stand today:

Why has API been in the news?

Around this time last year, API was in a state of disarray, close to losing its crucial accreditation from the federal government because of pervasive dysfunction that regulators said put patients and staff in danger.

In early February, the newly appointed commissioner of the Department of Health and Social Services under the administration of Gov. Mike Dunleavy announced that a private company, Tennessee-based Wellpath, would take over management of the hospital under a no-bid, emergency contract.

The situation was “dire,” Commissioner Adam Crum said at the time.

Wellpath Recovery Solutions soon drew scrutiny for its ties to the private prison industry and its history working in troubled institutions.

In April, the state canceled the long-term part of the contract with Wellpath, bowing to pressure from legislators and the public.

“With the controversy surrounding this project, we want to make sure everybody sees we’re trying to do this the right way,” Crum said.

[Dozens of patients at the Alaska Psychiatric Institute have been arrested this year for assaults inside the hospital. Is there a better way for authorities to react?]

Who has been running API?

After the union representing most workers sued in April, the state canceled the second phase of the contract worth about $225 million that it had offered to Wellpath to manage the hospital.

Instead, the state amended the contract to extend the first phase.

Wellpath is currently on the month-to-month “hospital administration services” contract through March 31, according to the state.

In September, the state downgraded Wellpath’s monthly pay from $1 million to $700,000 per month.

Alaska’s Department of Health and Social Services says it is in charge of the hospital and always has been.

What has Wellpath been doing?

Consultants from the company have worked to rewrite hundreds of policies and procedures, many of which hadn’t been updated in decades, and have retrained staff in new safety procedures and techniques to decrease violent incidents and the use of restraint and seclusion, said Kevin Huckshorn, a Wellpath executive who has been working at the hospital.

“It’s a lot easier to start up a brand-new hospital from the get-go than to go back and revise policies that have been in place for a long time," she said. "You have to retrain every single staff member in that facility, and then monitor them ... because people tend to go back to what they know.”

Wellpath is limited in authority, according to the terms of the contract. The company says it can’t hire, fire or directly manage most workers at API. It also can’t set wages or benefits for union positions but has helped recruit for some positions, like a psychiatrist, that aren’t in the union, Huckshorn said.

The company is in a “consultant” role, said Huckshorn.

“You’re a supporter, you’re a suggester, you can train,” she said.

Is API still in crisis? What progress has been made?

State officials assert that API has made progress in opening more beds to patients, hiring staff and getting out from the threat of serious regulatory sanctions:

• Hospital bed capacity rose to 47 from a low of 27 and the hospital received accreditation from The Joint Commission, an organization rating the quality of hospitals. API resolved all of its regulatory sanctions with the federal Occupational Safety and Health Administration, according to the agency, and regained its full license from state licensing authorities.

• Vacant high-level positions have been filled, including a chief of psychiatry, a behavioral health director, a medical director and a quality assurance director. All staff have been retrained on defusing dangerous situations, and in new techniques to avoid excessive restraint and seclusion that got the hospital into regulatory jeopardy to begin with, according to DHSS.

But the news hasn’t all been good.

Federal regulators with the Centers for Medicare and Medicaid Services found other problems during inspections at API this year, including an incident in May in which a patient punched a nursing assistant and the assistant hit back.

The hospital provided plans to correct the problems and was, as of Dec. 7, under no immediate threat of sanction, according to the Centers for Medicare and Medicaid Services.

There’s still a long waiting list for beds at API.

As of Thursday, the state’s online tool showing bed availability for psychiatric patients put the wait for a civil-commitment patient at 17 days. The hospital’s unit for adolescents wasn’t operating at all

Gridlock in the state’s program for mentally ill criminal defendants is still extreme. The wait for a slot in the 10-bed forensic unit was 90 days as of Thursday, with a 23-person waiting list.

Finding enough qualified staff — which many believe is the key to fixing long-term issues at the hospital — remains a huge challenge.

“API is still having difficulty recruiting people to fill positions again because potential employees don’t know if they will have a job if Wellpath takes over,” said Doug Carson, business agent for the ASEA/AFSCME Local 52 union that represents nurses and other workers at API.

The hospital has also seen turnover with its top executives. Matt Dammeyer, a new CEO hired in April, quit by September.

There’s also the much bigger, far more complex issue of systemic gaps in the broader system for mentally ill Alaskans.

Almost everyone involved — from nurses to regulators to Wellpath executives — agree that the state lacks enough places for people with serious mental illness to live and get care outside hospitals, and lacks services that keep sick people from spiraling into a crisis so deep they need to be at API.

Is API operating at full capacity?

No. On Thursday, the facility had 46 open beds in its 80-bed capacity, according to the state’s public data. The capacity has fluctuated throughout the year, bottoming out at 27 beds.

Progress in reopening beds has been hampered by continued problems finding enough nurses through the state’s slow hiring system and lagging pay scale.

The question of whether API will remain public or be turned over to a private company remains unanswered.

Wellpath’s consulting contract with the state ends on March 31.

But before the state can make any moves toward putting the hospital in a private company’s hands with another contract, it has to resolve an issue brought up by the union lawsuit.

In August, the state put out a bid for a feasibility study to examine whether the hospital should be privatized at all — a step a judge in the union lawsuit agreed should have been taken before the state offered the original no-bid emergency contract to Wellpath.

WIPFLI, a Wisconsin-based consulting firm, was the only respondent to the solicitation, according to DHSS. The state then canceled that solicitation, saying the result “wasn’t in the best interest of the state.”

Critics questioned whether state officials canceled the bid because they thought the respondents might recommend against privatization.

The state says the sole respondent just didn’t prove it could do the job.

WIPFLI “was asked additional questions, and given a chance to clarify, and the respondent still did not provide enough information to be able to prove they could perform the tasks needed in the proposal,” according to DHSS spokesman Clint Bennett.

The state put the privatization study contract out for bid and eventually awarded it to the Western Interstate Commission for Higher Education, also known as WICHE.

The union sees that as a conflict.

Huckshorn, the Wellpath employee charged with leading the company’s efforts at the hospital, in 2016 co-authored a story of API’s adolescent unit for WICHE, said Carson, the union business manager.

“This is a conflict of interest that undermines the credibility of the conclusion reached by WICHE about the feasibility of privatizing API,” said Carson.

Huckshorn said she was an independent contractor of WICHE, and the study focused on a topic unrelated to the privatization question.

“WICHE is widely recognized as an expert authority on the subject area being examined in the feasibility study, and they enjoy a sterling reputation within the mental health care community,” she said in an e-mail. “Any suggestion that their work could be compromised because of a previous professional relationship is absurd.”

The privatization feasibility study is due by Jan. 30.

Does API face other legal issues or lawsuits?

Morse ordered the state to come up with a plan to stop the long wait times — which would likely involve somehow increasing bed capacity rapidly at API, or finding viable alternatives at the hospital level.

It remains unclear how the state will comply.

The deadline for the state to submit a plan is Dec. 23, according to the Disability Law Center of Alaska, one of the plaintiffs in the case.

Will API come up in the upcoming legislative session?

So far, Rep. Zack Fields, an Anchorage Democrat, has introduced a bill that would require API to maintain a staff capable of operating 55 beds at minimum, at all times.

“If the proposal is enacted, API will be adequately staffed thanks to a requirement for competitive compensation to help recruit and retain healthcare providers,” Fields said in a statement.