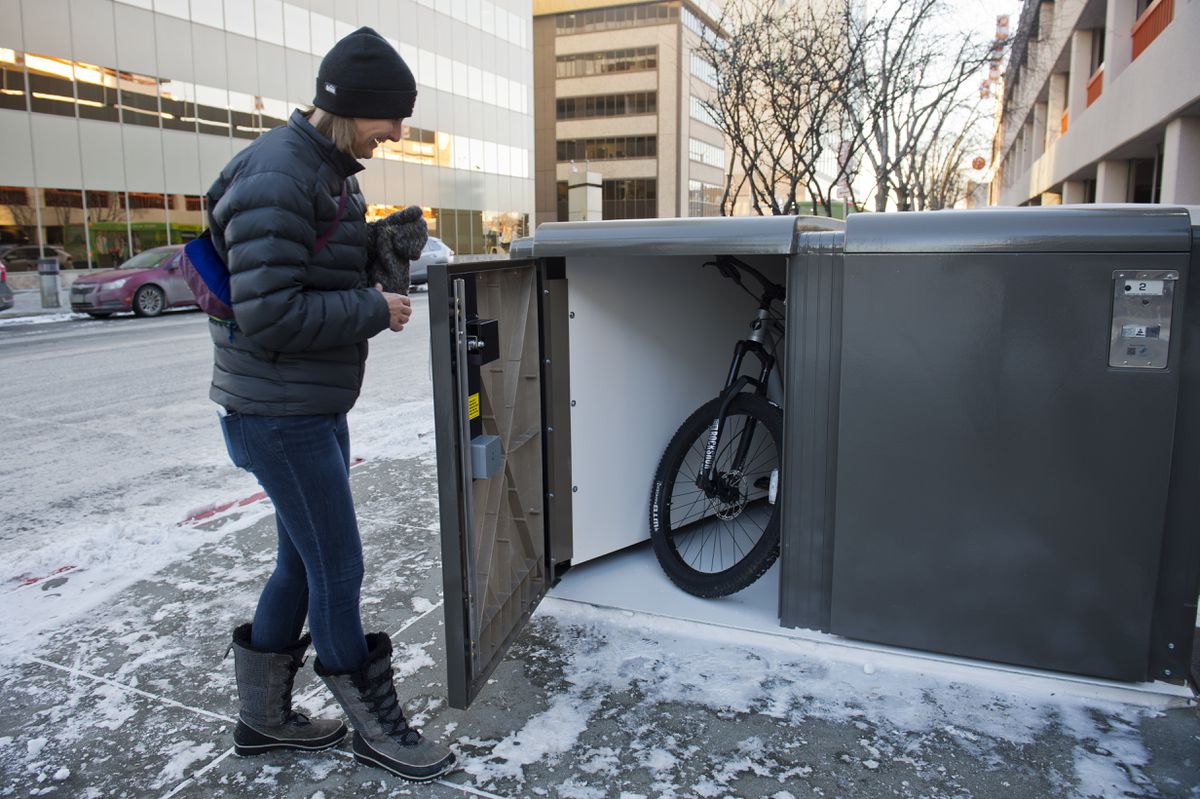 Katie Bledsoe shows the AK Bikebox locker at the corner of 7th Avenue and G Street in downtown Anchorage on February 13, 2020. Bledsoe and her husband Justin Bledsoe own the business, which has just this location so far. (Marc Lester / ADN)

Katie Bledsoe shows the AK Bikebox locker at the corner of 7th Avenue and G Street in downtown Anchorage on February 13, 2020. Bledsoe and her husband Justin Bledsoe own the business, which has just this location so far. (Marc Lester / ADN)

A couple concerned about bike theft has launched a new company to help fix the problem for other Anchorage bikers.

Justin and Katie Bledsoe installed the first lockers in downtown Anchorage early this month, on the sidewalk near the city’s tallest building, the 22-story ConocoPhillips office complex.

The gray fiberglass boxes blend into the scenery at the northwest corner of 7th Avenue and G Street — akin to a pair of big safes turned on their sides. They house four lockers, each large enough for a bicycle to be wheeled inside.

“Our goal is to promote bicycling in Anchorage, and one of the biggest concerns for cyclists is bike security and safety,” said Justin, 37, an accountant.

Last year, 557 bikes were reported stolen, according to figures provided by the Anchorage Police Department. Only 70 of those, 13%, were recovered.

“Bike theft seems to be a major impediment to a lot of people riding for both recreation and commuting,” said Steve Schell, vice president of Bike Anchorage, a cycling advocacy group.

At the same time, more and more people in Anchorage have taken up winter biking, riding valuable fat-tire bikes.

[Want to try fat biking but feeling timid about it? Here are some tips.]

“So it’s a great time, in that light, for adding these lockers,” Schell said. “They seem like a great solution to the problem.”

The Bledsoes say avid bikers worry their bike locks will be cut when they visit a shop downtown. You have to keep an eye on it when you go inside somewhere, said Katie.

Last year, the couple decided to launch their business, AK Bikebox, and invest in lockers they had seen in bike-friendly cities like Portland.

They worked out a land-use agreement with EasyPark, which owns the parking garage near the lockers, Justin said. The company is run by the Anchorage Community Development Authority, a city agency that owns the block.

The cost is $3 for the first hour and 50 cents for additional half-hours. Over time, the Bledsoes hope to lower the price with membership programs.

The fiberglass-composite structures are made by CycleSafe, a company in Michigan, Bledsoe said. The battery-operated locks work well below zero degrees. A long steel bar serves as the lock. The couple had the lockers custom-designed so they match the parking garage.

Using a smart phone, each locker can be reserved in advance and opened repeatedly during a reservation period. One cyclist can rent up to two lockers, so a friend can come along. The Movatic app to use the locker can be downloaded at akbikebox.com.

Justin said one of the nice things about the lockers is that they keep bikes out of sight, so they’re not a visible incentive for theft like a bike on a rack.

The couple is talking with businesses across the city. They hope to add more more bike boxes, at sites such as parking lots or near buildings.

“We’d like to have as many lockers as we can to support more bicycling,” Justin said.