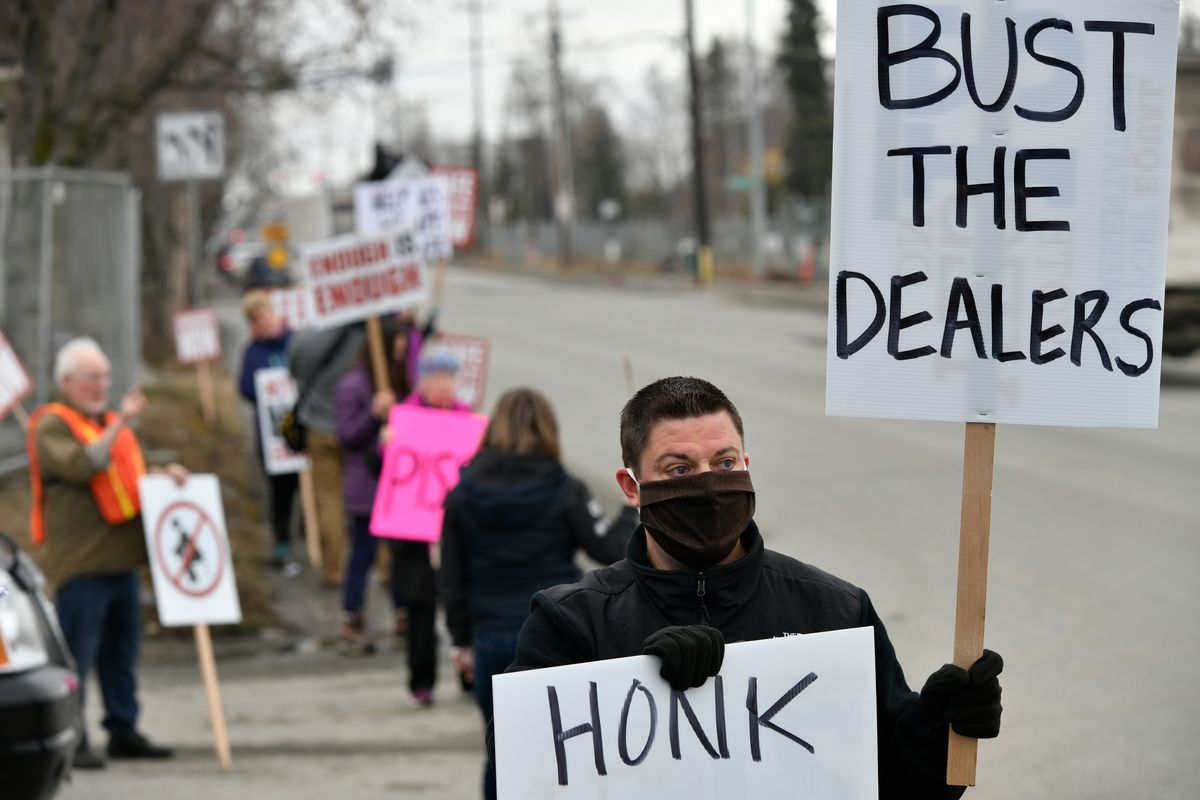 As the new coronavirus circulates in Alaska and globally, a group of Anchorage protesters gathered along a street on Friday, calling on the Berkowitz administration to shut down a homeless camp on Third Avenue and Ingra Street that they say is contributing to crime and threatening public health.

Many of the roughly 25 demonstrators who gathered on the corner of Third and Hyder Street, across from the camp, were people who live, work or own businesses nearby, including Tim Weeks.

During the COVID-19 pandemic, as city and state residents are ordered to hunker down, Weeks and others said it is inconceivable that large groups of unsheltered individuals are allowed to camp illegally and wander around Anchorage streets.

“They need to start enforcing the law. The police are pulling people over for driving 60 miles an hour in a 55-mile-an-hour zone,” Weeks said.

Why are they not making people who are still congregating in large camps take shelter, he asked?

Phyllis Kruger, who said she grew up in Alaska, also finds it hard to understand.

"I can’t even get my hair cut,” Kruger said, noting that small businesses are being hit hard by having to shut down.

“They’re partying over there on our municipal land. It’s against the law,” said Kruger, glancing across the street at the homeless camp. “I’ve never seen the city look like this.”

Nancy Nolin, who lives nearby, said she no longer feels safe. Unsheltered people have been looking in her windows, trying her doorknobs, and otherwise violating her property.

Stephanie Rhoades, a retired judge who lives near downtown, said many of the people who are not taking shelter are part of a criminal element that poses extreme public health risks.

“The rules should apply to everyone,” said Rhoades.

The city is spending large sums of money to safely house and feed hundreds of homeless residents in the Sullivan and Ben Boeke arenas, she said. The sports complex on Gambell Street was converted into an emergency mass shelter in March capable of housing up to 480 people a night.

Anchorage now has “more than sufficient shelter” for all of the city’s estimated 1,100 people experiencing homelessness, Rhoades said.

“It really could not be clearer that some folks just want to live closely congregated and outdoors,” she said.

The fact that the municipality isn’t moving everyone into shelter during the pandemic is unconscionable, in Rhoades’ view.

In a community address on Friday, Mayor Ethan Berkowitz said the people camping outside are a “difficult population” to deal with but the police are stepping up patrols. Berkowitz said he’s listening to what fed-up residents are recommending provided it is “consistent with the law.

“We are doing what we can to reduce the number of people who are engaged in conduct that is criminal and if there is a crime that has been reported to APD, APD responds to every single report that it gets and will respond accordingly,” Berkowitz said.

As the protesters gathered, generally with several feet of space between them and most wearing masks, cars sped past with drivers honking horns and flashing thumbs up.

A few homeless advocates joined a small counterprotest across the street.

Holly Cannon was among them. The Sullivan and Ben Boeke mass shelters are not a workable solution for everyone who’s experiencing homelessness and many of the people camping out have been rejected from the arenas, Cannon said.

Some have mental health and behavioral challenges that make staying inside a large arena untenable, she said.

Others have addiction issues and find it impossible to stay in a confined space.

“They feel like they will be trapped,” said Cannon, who lived on the streets herself but said she is now housed.

Lisa Lozano, who is staying at the camp on Third and Ingra, said she is among those who cannot stay inside a mass shelter.

“They are kicking us out,” said Lozano. “It’s hard and a lot of stress. People are looking at us and telling us that we’re something that we’re not.”

Outside the Ben Boeke arena on Friday, Joseph Parker sought housing assistance at one of the community resource hubs set up in the parking lot. Parker said he lost his job as a dishwasher at a downtown restaurant. He’s been splitting his time at Henry House, a transitional living center for former inmates, and Sullivan Arena. Each has their pros and cons. At Henry House, he worries about bed bugs. At Sullivan Arena, he likes the food but is concerned about confrontation.

“Everybody wants to fight,” said Parker.

If things get to be too much, Parker said he might invest in a tent and live outside for a while. But as soon as the salmon arrive, Parker hopes his luck will change. He said he’s worked as a setnetter before and is looking forward to doing it again.

Marc Lester contributed to this story.