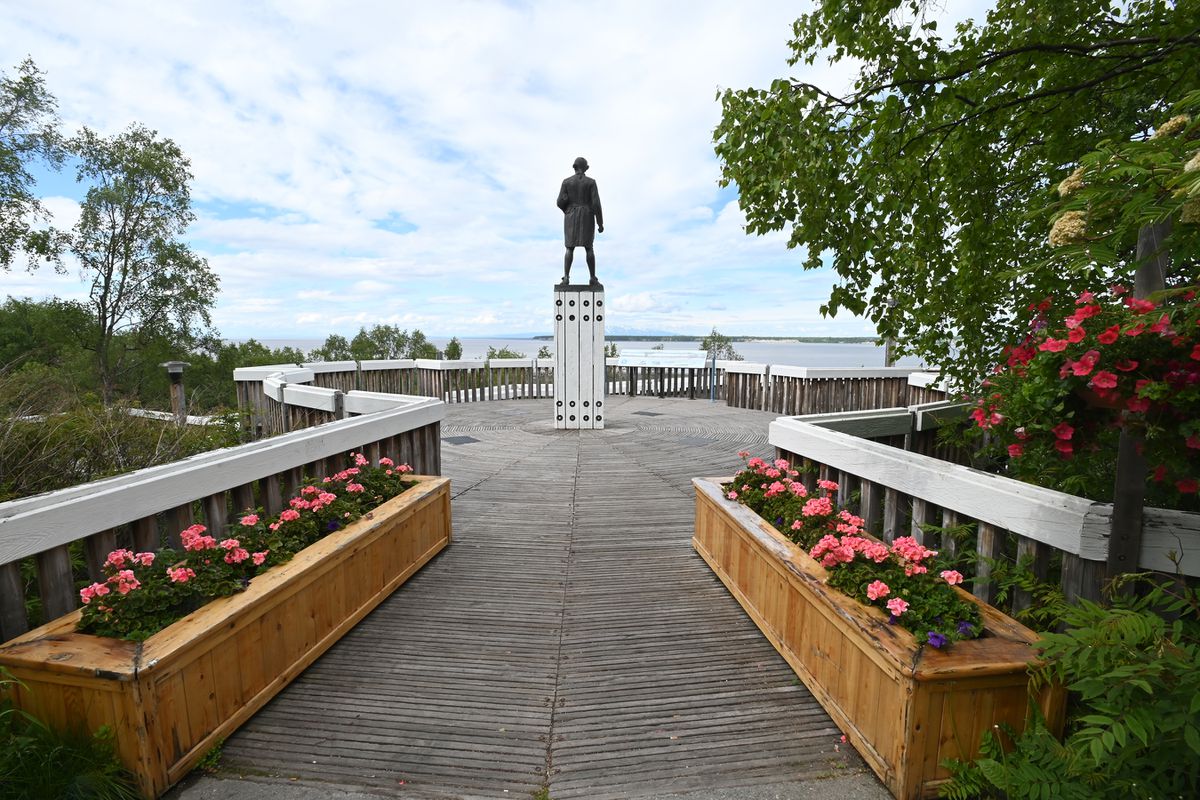 A statue of Captain James Cook stands on a plinth in Resolution Park overlooking Cook Inlet near Third Avenue in Anchorage on Wednesday. (Bill Roth / ADN)

A statue of Captain James Cook stands on a plinth in Resolution Park overlooking Cook Inlet near Third Avenue in Anchorage on Wednesday. (Bill Roth / ADN)

As statues of slave traders, war generals and other controversial historical figures are toppled or vandalized worldwide, some in Anchorage are asking whether the Capt. James Cook statue at downtown’s Resolution Park should be the next to go.

Cook is not being spared from the global controversy, as he “discovered” land for the British that was already inhabited by Indigenous people.

For more than a week, some local residents have taken to social media to voice support for removing the statue, which was a gift from oil company British Petroleum to the city as part of the American Bicentennial Celebration in 1976. Anchorage’s statue is a replica of one in Whitby, England, a sister city of Anchorage.

People in Australia and the United Kingdom are also calling for the removal of statutes of Cook. Over the weekend, police in Sydney guarded a Cook statue as protesters moved toward it.

On Monday, the Anchorage Sister Cities Commission wrote a letter to Mayor Ethan Berkowitz acknowledging local calls to take the statue down. The commission suggested a process to engage with the community to decide how to modify the monument to also reflect the history of Alaska Natives.

“The Commission recognizes that the statue alone excludes the history of the indigenous people in what is now Anchorage,” the letter reads. “Rather than remove the statue, the Commission feels this situation can be instrumental as an opportunity to support a positive dialogue between us and our Sister City Whitby, as well as continued conversation and education among Anchorage’s diverse population.”

During a Wednesday virtual town hall meeting, Berkowitz said he’d like to go through the process the commission proposed.

“I think as long as we can proceed respectfully forward, the community is going to be gratified by the conversation that will result from that process,” Berkowitz said. “I think it will be educational and I think it will lead to a positive result.”

In local social media posts calling for the Cook statue’s removal, some have noted that the statue might not be securely attached to its base, and others have offered up a truck to assist in its removal.

During the town hall meeting Wednesday, Berkowitz and Anchorage Police Chief Justin Doll were asked if police would guard the statue to protect it from “demolishing by the mob.”

“I’m not aware of any mob in that area at the moment,” Doll responded.

Aaron Leggett, tribal president of the Native Village of Eklutna, curator of Alaska history and culture for the Anchorage Museum and a member of the sister cities commission, said people who think the Captain Cook statue fits in with other statues of Western colonialists and therefore should be taken down are having a knee-jerk reaction.

Leggett said taking it down would be a missed opportunity. Instead, he wants the plaque changed to represent a more accurate portrayal of history, including that of indigenous people, as well as more material explaining the true history of Alaska before colonial explorers came to the area.

“We want to see more information there, we want to be acknowledged there, but we don’t necessarily want to see the statue taken down,” he said.

Cook is famed in Alaska for his brief time, in May and June of 1778, in what is now known as Prince William Sound and Cook Inlet, which he came upon while searching for the Northwest Passage as an explorer for the British government. While only in the inlet for about 10 days, Cook and his crew were the first Europeans to set foot in the region.

In addition to the inlet being named after him, his moniker adorns the iconic Hotel Captain Cook in downtown Anchorage.

Leggett said Cook’s voyages and cartography were significant achievements, but his brief stop in the area largely is not significant.

“The more important question to me is why Anchorage feels the need to cling on to him when there is a rich history that already exists here, and that’s what I’m trying to bring out,” he said.

Leggett also pointed out that Cook did not colonize Alaska for the British.

But during the current worldwide reckoning on racism, people are calling for a number of monuments to be torn down.

During his time in Alaska, he planted a British flag at Point Possession on the Kenai Peninsula in front of the area’s original inhabitants, the Dena’ina.

[From 2015: A fresh look at Cook: Anchorage Museum opens 1st major exhibit to focus on Captain Cook’s voyage to Alaska]