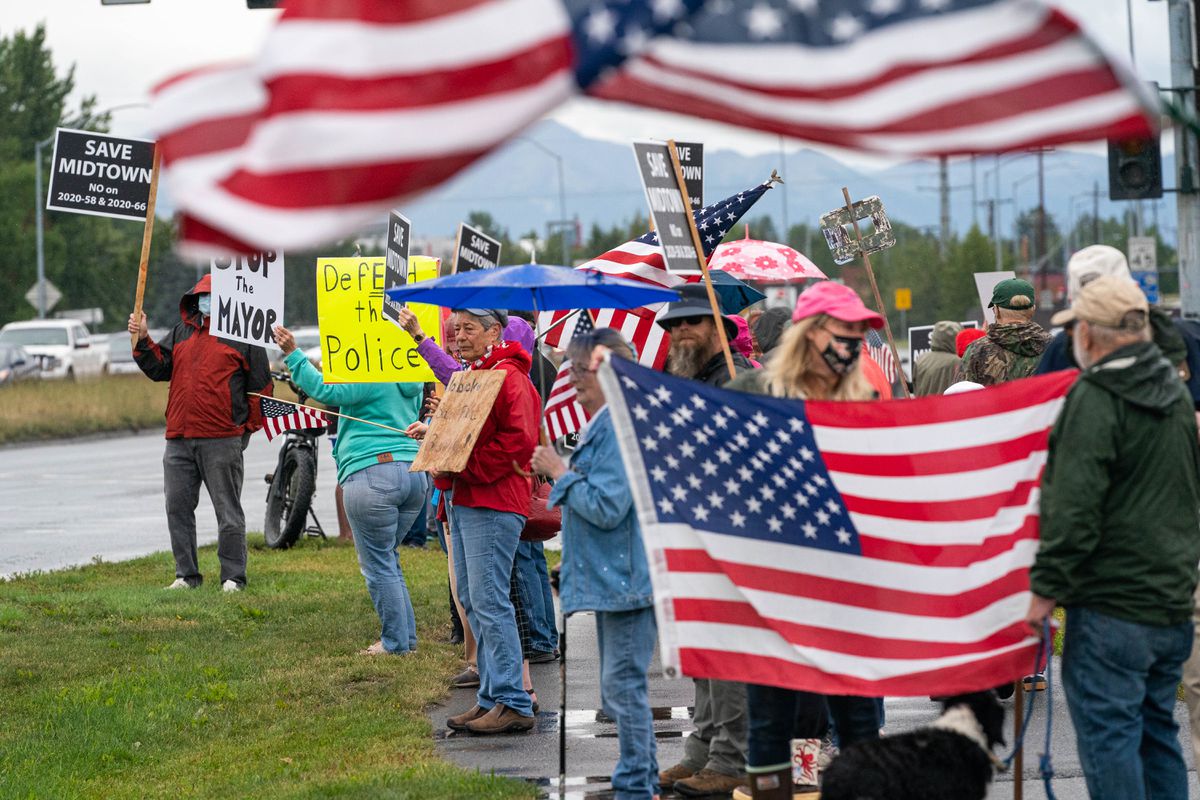 Protesters opposed to the Municipality of Anchorage's plan to purchase buildings for homeless and treatment services rally at the corner of Benson Boulevard and the Seward Highway on Friday. (Loren Holmes / ADN)

Protesters opposed to the Municipality of Anchorage's plan to purchase buildings for homeless and treatment services rally at the corner of Benson Boulevard and the Seward Highway on Friday. (Loren Holmes / ADN)

Under light rain and heavy clouds, around 50 people gathered off the Seward Highway near Benson Boulevard late Friday afternoon to protest the city’s plan to purchase several buildings to serve the homeless and to treat people addicted to drugs or alcohol.

Some protesters waved “Save Midtown” signs. Others held American flags. Several men, who appeared to be homeless, sat or stood nearby with little interaction between the two groups. Seward and Benson is a high-traffic corner where homeless residents often panhandle from drivers waiting at red lights.

“I don’t want to see CARES Act funds used for this,” said Karan Nixon, echoing concerns raised by other protesters.

Nixon was referring to $22.5 million in federal funds from the Coronavirus Aid, Relief, Economic Security (CARES) Act that Mayor Ethan Berkowitz’s administration proposes spending to buy four buildings in Midtown and Spenard for homeless services and drug and alcohol treatment.

“Businesses that weren’t able to keep their doors open should be getting that money,” said Jennifer Frazier.

Frazier said she turned out Friday in part because she has never seen the face of homelessness look as visible and disturbing as it does now in Anchorage.

The $2 trillion CARES Act, signed into law by President Donald Trump in March, is a massive economic stimulus package that aims to offset public health and economic impacts of COVID-19. The funds are meant to help laid-off workers, small businesses, families and individuals struggling because of COVID-19, and state, local and tribal governments navigating pandemic-related impacts.

Several demonstrators, and others who testified before the Anchorage Assembly in recent days, have questioned the city’s use of CARES Act funds for building purchases. The city says that its legal department has vetted how CARES Act funds can be used and that the purchases are an eligible use. At an Anchorage Assembly meeting last week, Berkowitz’s chief of staff, Jason Bockenstedt, said it is “crystal clear” that Congress and the U.S. Treasury Department intended for CARES Act funds, allocated to local governments, to be used this way.

“I would also just mention that there are dozens and dozens of other communities around the Lower 48 that have already used their CARES Act funding for these types of purchases,” Bockenstedt said.

On Monday, the Anchorage Assembly is scheduled to vote on whether to pass an ordinance allowing the city to move forward with acquiring the Best Western Golden Lion Inn, Bean’s Cafe, Americas Best Value Inn & Suites and the former Alaska Club building on Tudor Road.

If the ordinance passes, Bean’s Cafe and the Alaska Club building would become centers where a social service provider would engage with people experiencing homelessness, helping them get their lives back on track. The city wants the Alaska Club to eventually become an overnight shelter as well. Americas Best Value Inn & Suites would become a transitional housing complex, and the Golden Lion Inn would offer alcohol and drug treatment. The type of treatment center it would become would be worked out after the building is purchased and the city selects a provider.

As protesters held signs and flags, Nelson Alexie, 60, sat on the sidewalk, smiling and waving at passing cars. Alexie said he’s from Bethel and came to Anchorage for knee surgery in October. For a variety of reasons, he didn’t make it home.

Alexie said he would prefer to sleep outside rather than stay in Sullivan Arena, which the city converted into a homeless shelter in March to provide more space between beds during the pandemic.

“I don’t want no shelter. I have a sleeping bag,” Alexie said.

Near him stood Shawn Pushruk, who said he’s originally from Teller, a village northwest of Nome. Pushruk, 33, came to Anchorage in 2008, he said, to serve time in a halfway house. Afterward, he also had trouble finding his way home, a common reason rural residents often become homeless in Alaska’s biggest city.

“I kept losing my job and places to stay,” Pushruk.

Pushruk said Anchorage needs to come up with more transitional housing for Alaskans like him, or at least places where homeless residents can store their belongings.

“It’s hard to carry it around all the time.”