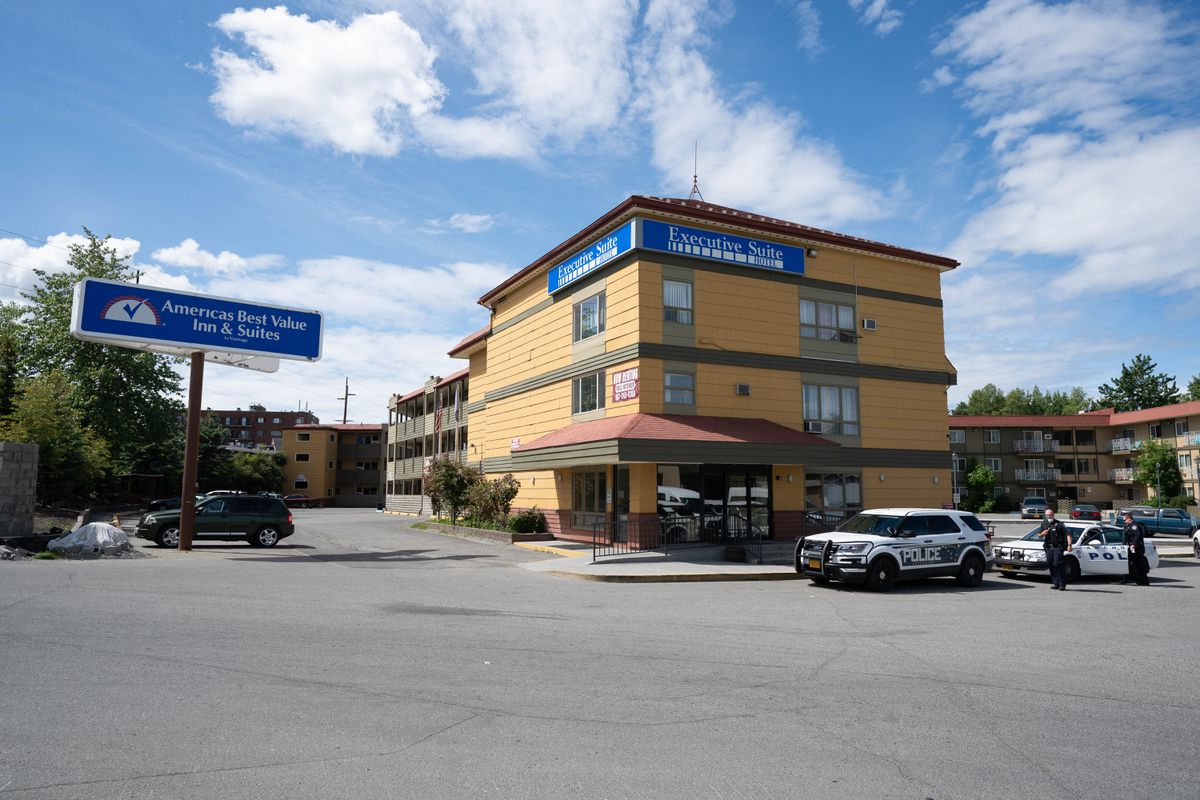 The U.S. Department of the Treasury’s Office of Inspector General believes the Municipality of Anchorage’s recently approved plan to purchase three buildings for homeless services with federal dollars is an ineligible use of COVID-19 relief funds.

The office looked into the spending plan after several citizens lodged complaints about the purchase of the buildings, a plan that drew intense criticism from residents near the proposed facilities.

On Wednesday morning, six members of the Inspector General’s Office discussed the issue with Mayor Ethan Berkowitz, several members of his staff and two Anchorage Assembly members for a little more than an hour.

“Their interpretation was that these buildings purchases would not be an appropriate us of CARES Act funds,” said Assembly Chair Felix Rivera, who participated in the meeting.

Following the meeting, the Anchorage Assembly picked up Wednesday where it left off Tuesday night, holding a public hearing and deliberation on a spending plan for the remaining $100 million or so of the city’s CARES Act funds.

On Wednesday night, the Assembly passed an amendment brought by Rivera, Assemblywoman Austin Quinn-Davidson and Berkowitz that added a provision requiring several of the spending line items to be reviewed by the U.S. Treasury before the money could be spent.

After about five hours of testimony, amendments and debate, the Assembly passed the spending plan, with Jamie Allard and Crystal Kennedy opposing.

Prior to the vote, Rivera said it was one of the most important of his time on the Assembly, because it’s providing relief to people in the most dire of circumstances.

“I know without a doubt that what we are approving today is going to save lives, and going to help those who see no path forward,” Rivera said.

Rivera’s summary of the meeting with the Inspector General’s Office differed from that of the city administration’s, in that he directly said the federal officials’ current interpretation is that the use of funds to purchase buildings for homeless services is not appropriate.

“They nonetheless had concerns about the other three buildings,” Vogel said when asked if the federal government expressed doubt that the city was using the pandemic relief funds correctly.

Bockenstedt said the Inspector General’s Office is not the decider on what is or isn’t an appropriate use of CARES Act funds. That responsibility falls to the U.S. Treasury.

Bockenstedt said the city plans to meet with the Treasury to vet its plan. No meeting has been scheduled yet.

Vogel said she’s not sure how many complaints were lodged, but that those in opposition of the building purchases encouraged others to complain to the Inspector General’s Office.

Staff from the federal office said they had concerns with the city’s plan to purchase buildings for long-term shelter and other services with pandemic relief money. They also had concerns with jobs programs and first responder payroll backfill that the city plans to fund with CARES Act money.

In a 9-2 vote on Tuesday night, the Anchorage Assembly approved the city’s plan to use $12.5 million of that money to purchase the three buildings in question. It also opened a public hearing on the plan to spend the remainder of the CARES Act funds, roughly $100 million.

On Wednesday, they resumed the public hearing, which lasted about an hour. Nearly all of the 10 testifiers advocated for the Assembly to divert more CARES Act funds to the hospitality industry.

Following testimony, the body spent hours going through amendments and deliberating the plan. One was an amendment from Assemblyman John Weddleton that passed, carving out about $7 million for the hospitality industry by cutting funds from several other areas.

Before Wednesday’s meeting started, a group of about 30 protesters gathered outside to voice their opposition to a variety of issues centering around the Assembly and the Berkowitz administration, including the proposed use of CARES Act funds, the purchase of buildings for homeless services and the closure of bars and restaurants to dine-in service.

The gathering was muted compared to the night before, and had dispersed by about 8:30 p.m.

Hundreds of people turned out to protest outside the Assembly chambers in the Loussac Library on Tuesday night and into Wednesday morning. They also lined a portion of East 36th Avenue and drew many honks of support from passing cars.

Besides use of the CARES Act funding, protesters expressed anger over Berkowitz’s latest emergency order that closed bars and restaurants to dine-in service for four weeks. After the meeting ended at midnight, some protesters surrounded Berkowitz and then the car in which he was a passenger, videos posted to social media showed. One protester lay down in front of the car to prevent it from leaving until Assemblywoman Allard stepped in and spoke to him. The man then got up and left.

Several of the protesters Wednesday accused the administration of incorrectly using CARES Act funds, and cheered the Inspector General’s inquiry.

Concern over misuse of CARES Act funds was voiced repeatedly during five nights of public testimony on the plan. Berkowitz’s administration repeatedly argued it was an appropriate use. Bockenstedt during one meeting that the Treasury’s guidance was “crystal clear.”

“(Inspector General’s staff) acknowledged some of the frustration that states and local governments are having with dealing with this very large stimulus package and the guidance that has come along with it, that at times has not been super clear,” Bockenstedt said.

The administration has previously said they were aware of other cities making similar purchases with CARES Act money. On Wednesday, Vogel said the Inspector General’s Office told city officials that they had not investigated any of those purchases in other cities or rendered opinions on such purchases.

Vogel said part of that uncertainty is that the Treasury’s guidance has continually changed, leaving local governments scrambling to keep up.

“We are in a really interesting situation where we have federal dollars that must be spent really, really quickly in a landscape of guidance that keeps changing,” Vogel said. “The latest guidance was updated two days ago, and apparently more is still forthcoming.”