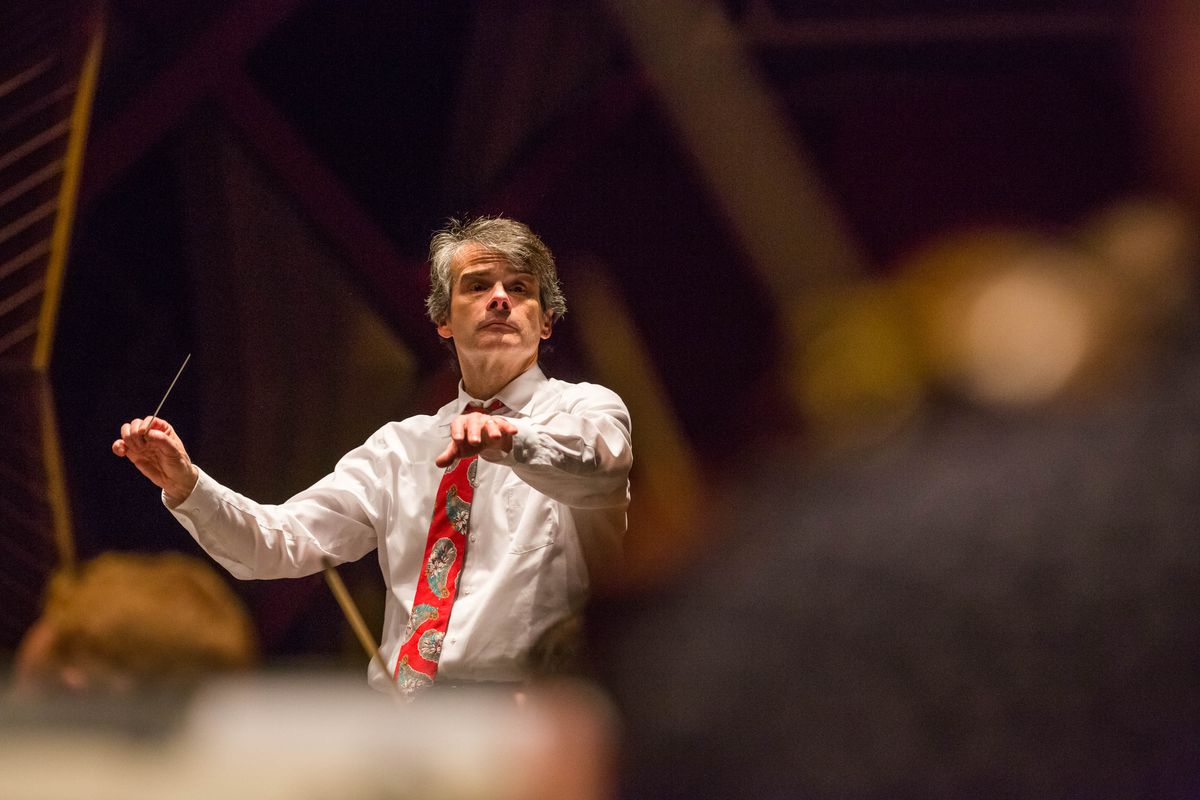 Randall Craig Fleischer conducts the Anchorage Symphony Orchestra during a rehearsal at the Alaska Center for the Performing Arts on Nov. 11, 2015. (Loren Holmes / ADN archive 2015)

Randall Craig Fleischer conducts the Anchorage Symphony Orchestra during a rehearsal at the Alaska Center for the Performing Arts on Nov. 11, 2015. (Loren Holmes / ADN archive 2015)

Randall Craig Fleischer, the longtime music director of the Anchorage Symphony Orchestra, died Wednesday night at his home in California, according to media reports. He was 61 years old.

Fleischer lived in Sherman Oaks, California — a suburban area of Los Angeles — and would be in Anchorage about 20 weeks each year, Reddick said.

He passed away unexpectedly, reported television station WKBN in Youngstown, Ohio, where Fleischer also served as music director of the Youngstown Symphony Orchestra. His wife told WKBN that Fleischer said he wasn’t feeling well before she found him dead a half-hour later.

An autopsy is planned, the TV station reported.

Reddick said she’s heard from musicians, patrons and donors who were all reeling.

Fleischer loved both the symphony and the city of Anchorage because the community embraced his creativity, Reddick said.

Fleischer also served as the music director of the Hudson Valley Philharmonic in Poughkeepsie, New York, and would contract with the San Francisco Symphony in the winter. In summer, he would normally be conducting internationally, Reddick said.

[From the archives: Stirring, not stuffy: Anchorage conductor likes an unorthodox orchestra]

He co-created the classical-rock fusion project “Rocktopia,” which ran at the Broadway Theatre in New York City, according to his biography on the Anchorage Symphony Orchestra website, and was a “national leader in the area of symphonic rock and world music fusion.”

Fleischer worked with musicians such as John Densmore of The Doors, The Beach Boys, Blondie, The B-52′s, Kenny Rogers, Ani DiFranco, John Cale of the Velvet Underground and Garth Hudson of The Band, according to his biography.

In 1992, he conducted an ensemble that included YoYo Ma at the Kennedy Center Honors, with President George H.W. Bush presiding. And in 1993, he conducted a private concert at the Vatican for Pope John Paul II, who awarded Fleischer a medal, according to the Anchorage Symphony Orchestra website.

While Fleischer expected and demanded much of the musicians he worked with, he was still approachable and encouraging, said Steven Alvarez, orchestra personnel manager and principal percussionist.

Fleischer’s conducting style was clear and he was easy to follow as a musician, Alvarez said. You always knew where you were and what was expected, he said. In the symphonic world, some use the phrase “a really good stick” to describe conductors, meaning they handle their baton well, Alvarez said.

“Randy had a great stick,” Alvarez said. “He conducted us well and we never, ever worried about not having him as that lead and as that support, because it takes a lot to bring together 85 musicians and make them sound as one cohesive unit. Randy certainly had that ability.”

Though his stage persona was larger than life, Fleischer was down to earth and was quick with a joke, Alvarez said.

“He was able to get a concert hall — with 2,000 people in it — in the palm of his hand as he led not only us as musicians but all of the audience on this musical journey that provided great spiritual and emotional comfort and excitement to everyone involved.”

My heart is breaking as I post this. My dear friend and colleague Randall Fleischer has passed away. Randy was more than...

A Daily News article from April 1999 about Fleischer being named director said he was “a self-described avid fan of rock music” who studied music at the Oberlin Conservatory of Music in Ohio and the Indiana University School of Music. He grew up in Canton, Ohio, and was the son of a shoe manufacturer, according to the article.

Fleischer was most proud of the piece “Echoes,” Reddick said. “Echoes” is based on the 19th century whaling industry, and followed ships’ journeys from the East Coast south around South America to Hawaii and eventually Alaska. The multimedia piece included song and dance from Alaska Native, Native American and Native Hawaiian cultures as well as New England sea shanties.

“It’s not only a highlight of his time here in Anchorage and in Alaska, but it’s been a highlight of his career to work with Indigenous cultures and to create that work,” Reddick said. “It was a deeply collaborative experience and one that he cherished.”

Alvarez worked closely with Fleischer on the piece, which premiered in 2008 in Anchorage, and said it’s a highlight in his own career not just because of the performance but because he grew closer to Fleischer.

On opening night, there were 40 guest performers in addition to the orchestra. The piece was the culmination of about five years of work, Alvarez said.

The audience loved it, standing and cheering at the end.