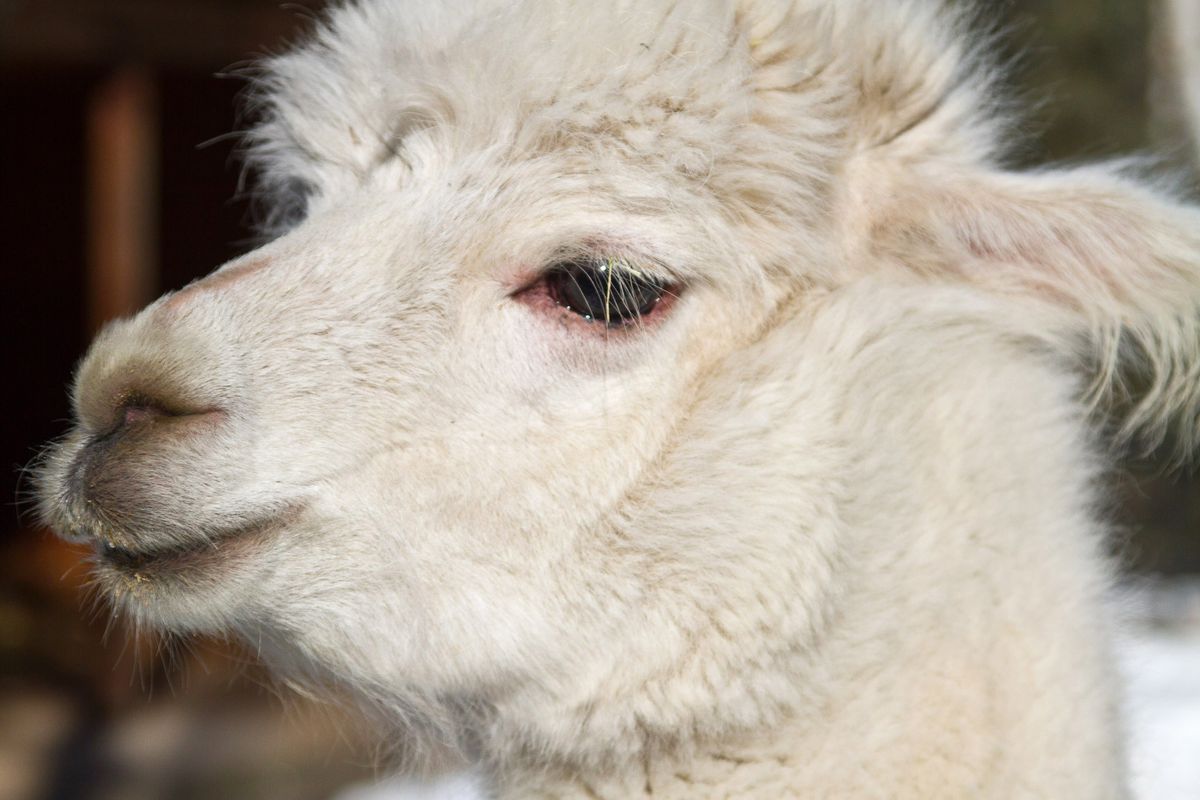 Caesar the alpaca was killed by a wild brown bear that dug under a fence at the Alaska Zoo, Sept. 19, 2020. (Photo by John Gomes / Alaska Zoo)

Caesar the alpaca was killed by a wild brown bear that dug under a fence at the Alaska Zoo, Sept. 19, 2020. (Photo by John Gomes / Alaska Zoo)

A longtime Alaska Zoo resident alpaca named Caesar was killed Saturday night or Sunday morning by a wild brown bear that broke into the alpaca’s enclosure.

The bear tunneled under the zoo’s perimeter fence and broke through the cedar split rail fence around the enclosure before killing Caesar, according to the zoo’s executive director, Pat Lampi.

Another alpaca — Fuzzy Charlie — was found unhurt, though wide-eyed and skittish.

Alaska Department of Fish and Game personnel killed the almost 600-pound male bear Monday night on a stakeout with Alaska Wildlife Troopers near some dumpsters just outside the zoo fence, state officials say.

The zoo is located in South Anchorage among neighborhoods backing up against the wilds of Chugach State Park. Bear sightings aren’t unusual, but this is the first fatal attack on zoo animals that officials could recall.

Zoo officials are deeply saddened to announce the passing of 16-year-old alpaca Caesar as well as a wild brown bear euthanized by wildlife officials after entering the zoo at night, resulting in Caesar's death. https://t.co/tFke2f3eiR pic.twitter.com/VbJKSQIGtX

Caesar was 16 and had been at the zoo for 15 years, Lampi said. He was popular with zoo visitors.

“He would walk up towards people and interact and sometimes spit on them if they upset him, but that’s what members of the camel family do,” he said.

The zoo plans to get another alpaca, officials say. They reinforced and repaired the fencing where the bear got in and the perimeter fencing of the zoo is being evaluated for other potential entry points.

Fish and Game had already targeted the bear for removal after it started toppling bear-resistant dumpsters in nearby neighborhoods last week, according to Dave Battle, the agency’s Anchorage area biologist.

“It usually takes a decent-sized brown bear to flip some of these dumpsters,” Battle said, adding that usually breaks the mechanism that secures the garbage inside. “Typically when brown bears start accessing trash, that becomes an elevated public safety threat.”

Battle was called to the zoo around 5 a.m. Sunday, he said. By the time he got there, Fuzzy Charlie was secured in a building and Caeser’s carcass had been dragged down a trail. The bear was long gone.

On Sunday night, Fish and Game personnel and Alaska Wildlife Troopers positioned one vehicle near dumpsters by the spot where the bear dug into the zoo, Battle said. They positioned another vehicle inside the fence. The bear hadn’t been seen during the day.

They heard the bear try unsuccessfully to get back inside during the night but couldn’t see it in thick brush, Battle said. The next night, however, one of the Fish and Game employees was able to get a shot when the bear returned and passed by the dumpsters.

It’s not unheard of for animals to break into zoos, but reports of attacks are rare.

It’s believed a young wild mountain lion may have killed two wallaroos and a red kangaroo in June at the San Francisco Zoo, according to reports in several media outlets.

A wild black bear broke into a Pocatello, Idaho, zoo in 2018 without incident. The 120-pound, 3-year-old bear climbed a large tree in front of the black bear exhibit before wildlife officials lured it down and tranquilized it.

Occasionally, wild black bears climb the fence at the Alaska Zoo too, Battle said. A few years ago, one ended up in a tree on one side of the zoo, away from the other animals.

“Nothing had ever happened,” he said.