Jack Roderick, former mayor who made enduring contributions to Anchorage, dies at 94 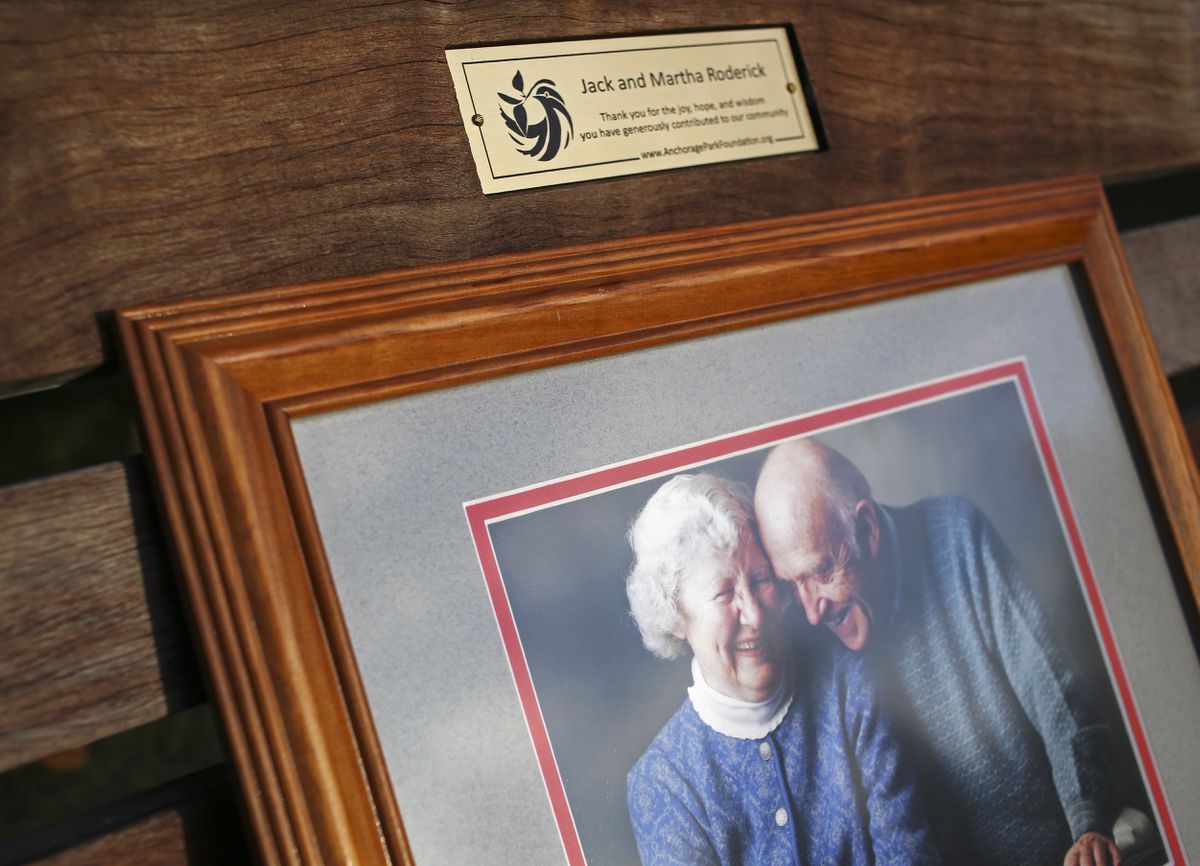 A framed photograph of Jack and Martha Roderick rests on a newly installed bench along the Chester Creek Trail that honors the couple for their political and community service in Anchorage. Neighbor Alec Kay arranged for the bench with the Anchorage Park Foundation and the Municipality of Anchorage. (Emily Mesner / ADN)

A framed photograph of Jack and Martha Roderick rests on a newly installed bench along the Chester Creek Trail that honors the couple for their political and community service in Anchorage. Neighbor Alec Kay arranged for the bench with the Anchorage Park Foundation and the Municipality of Anchorage. (Emily Mesner / ADN)

Roderick died at his home near Westchester Lagoon on Monday evening after a gradual age-related decline, his daughter Libby Roderick said.

Born in Seattle and educated at Harvard, Yale and the University of Washington, Roderick headed north to Anchorage in 1954 and embarked on an interesting life: In Anchorage he was a truck driver, worked in the oil exploration business and practiced law before spending time as the regional director of the Peace Corps in India. Returning to Alaska, he served as the final mayor of the Greater Anchorage Area Borough, from 1972-75, just before the borough government combined with the City of Anchorage to form the Municipality of Anchorage.

In that role he pushed to preserve green space and to establish trail systems, including the Campbell Creek trail, the People Mover public bus system and community councils — a model imported from Portland, Oregon, his daughter said.

“He saw it as the best way to get citizens engaged in local government in every area,” said Libby Roderick, a singer-songwriter, poet, activist and teacher in Anchorage.

Jack Roderick saw his contributions to enduring features of Anchorage life such as parks, trails, the bus system and community councils as his proudest achievements, she said.

Later, he held positions in state government, taught at local universities and wrote a memoir about witnessing the dawn of Alaska’s oil economy titled, “Crude Dreams: A Personal History of Oil & Politics in Alaska.”

He also formed deep friendships that endured until the end of his life. For years, Roderick and a group of friends had gathered on Saturday and Sunday mornings at the downtown New Sagaya market.

Most, but not all, of the coffee klatch members were on the Democratic side of the political spectrum, but the group was welcoming to people of all ideologies, she said. It felt like a throwback to an Anchorage of decades ago.

Jack Roderick’s whole life was like that, his daughter said: A leader in Democratic political circles, he was law partners with Republican Ted Stevens.

“There was this extraordinary spirit of camaraderie,” she said. “Of community. Even if you don’t agree with some other people, you know them well, and they’re good people.”

The coffee klatch endured the pandemic, with socially distanced meetings in Roderick’s big backyard. As the weather got colder, they moved to the open garage. Last weekend was the first time Roderick wasn’t well enough to attend, his daughter said.

The friends gathered anyway, in his honor.

Roderick spent his last few days at home in a hospital bed in the middle of the living room, a place that has played host to decades of parties and conversations.

Friends came by wearing masks, one by one, to say goodbye. People talked about his generosity, community-mindedness and intellectual stature.

“What was so moving to me, as a daughter, was just the fervent love people expressed,” his daughter said.

Appropriately for a man who often said “Democracy is my religion,” one of the last things he did was vote.

Roderick is survived by two daughters, Libby and Selah, and two granddaughters. His wife, Martha Roderick, died in 2008.

Correction: An earlier version of this story misstated Jack Roderick’s age at the time he died. Roderick was 94, not 93.